Fans of In the Bedroom and Little Children can agree on one thing; there aren’t nearly enough films by Todd Field in the world. But there’s a new one out now and it’s really, really good.

I knew going in that it would be a great performance (it was) and a compelling drama about ‘cancel culture’ or power dynamics in a changing world (it was that too.) But what I didn’t expect, and what made it so intriguing, is the stately pacing and progression and slow-building structure of the film with its horror movie elements as something unseen out of her past slowly stalks her and haunts her and comes back to get her. Wow. This was so compellingly handled all the way through. And that ending! Just awesome work.

I loved Everything Everywhere but this is a new contender for my favorite of the year.

In the Bedroom is one of my all time faves. Tom Wilkinson deserves an Oscar for so many reasons, but was outstanding in that film. (As was Sissy Spacek) Denzel winning for Training Day over Tom was a crime!

Speaking of brilliant Tom Wilkinson, I re-watched Michael Clayton the other night for the first time in ages and OH MY GOD is he amazing. What a great film. I liked it so much, I might actually watch Andor.

I just rewatched Michael Clayton a few weeks ago, too. It’s flippin’ perfect, and Wilkinson is sooo good. Everybody is.

Really looking forward to seeing Tar. I also have Little Children on my watchlist. I hadn’t even heard of it until recently. Honestly a bit unsure what to expect from it…

Since rrmorton brought up Everything Everywhere All At Once-- I’m pretty disappointed that the critics I’ve read/heard who are starting Oscar talk aren’t super bullish on EEAAO. If anyone (and I will preemptively include Cate Blanchette, although I’m sure she’s spectacular) beats out Michelle Yeoh, I will lose my hope in humanity and culture. And I’m hopeful The Daniels might win Picture or Director out of good will for making such an audacious movie. But the handicappers don’t seem to be on that wavelength at the moment.

This was the best trailer I saw at the theater today by far, definitely going to catch it when it hits the local cinema.

I absolutely loved the ending.

When it turned out that she’s doing a conducting gig for a Monster Hunter concert, I literally laughed out loud.

Although I guess I should be mad that video game culture is used as shorthand for a character’s humiliation.

Watched it yesterday and really enjoyed it. I thought this was one of Blanchett’s best performances ever.

While she didn’t need much help unraveling her life I was left wondering who was helping make it happen? Like who’s in the house setting off a metronome or stealing her notes for the 5th?

Looking forward to The Banshees of Inisherin and The Menu next week.

Exactly. But I felt like that ambiguity is where the movie excels.

Great performances and I loved Todd Field taking us through the world of celebrity conductors! But it felt like an elaborate set-up for a punch line. Like @telefrog, I adored the punchline, but I’m not sure I needed a 2+ hour movie to get there?

My overs are Cache (guilt as an invisible character), The Square (highly successful figure in rarified culture navigating an onset of chaos), and Resurrection (freaky revenge thriller where it’s not entirely clear who or what is being avenged). None of those movies is really invested in being a story about cancel culture, though, so maybe the comparisons miss the point?

(Speaking of conductors, me and Todd Field played supporting characters in a Western shot in Arkansas many years ago! I remember standing around with him waiting for the crew to get the olden-timey train in position for the shot. They kept having to interrupt shooting to roll it back and forth over a small stretch of track so that it would always be moving during the scene. He seemed like a very serious young man at the time, so I wasn’t surprised when years later he wrote and directed something as good as In the Bedroom.)

supporting characters in a Western

Frank and Jesse, right? My wife is the person that pointed you out one time while we were watching it.

Frank and Jesse, right? My wife is the person that pointed you out one time while we were watching it.

Why on Earth would you have been watching a 1994 Rob Lowe Western??? But, yes, that’s the one. Bill Paxton, Randy Travis, William Atherton, Rob Lowe, Todd Field, and me standing around in a beat-up old-timey train waiting for it to roll into place. With Cary Elwes’ producer brother gadding about talking about how the movie was going to premiere at Sundance! That was the high point of my movie career.

You might say I have unique insight into Lydia Tar’s overarching career trajectory. :)

It was on TBS or USA one night and we had it on while we were in the kitchen cooking. My wife suddenly shouted, “Oh my God! I think that’s Tom Chick in this movie!” I was doing something while looking down, so I just grunted a, “Nah. It’s probably someone that looks like him. You’re just obsessed with Gil.” (She really is obsessed with Gil from The Office and was tickled when I told her that was you.) I looked up, and yup, that was you all decked out Pinkerton style! 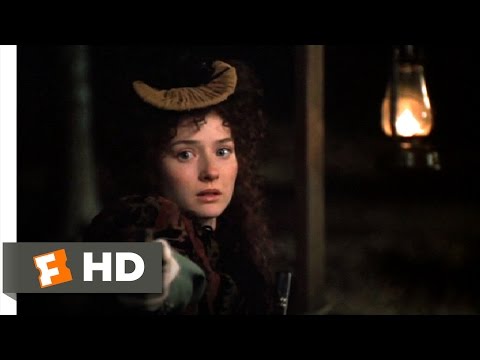 I was delighted to spot Tom recently in an episode of Newsradio. I had no idea he was in that, and it made me really happy to recognize him.

I have two holes in my Tom Chick spotting hobby. That’s Monty and The Nine. I don’t think either show has ever been available in streaming, and I’ve never heard of them in reruns.

He seemed like a very serious young man at the time, so I wasn’t surprised when years later he wrote and directed something as good as In the Bedroom.

So you’re saying he didn’t confide in you about any freaky blindfolded piano gigs he was doing later that night?