I figured I’d post what I decided to replace today, couldn’t find an appropriate thread, so here we go!

Back in 2003 I replaced a old circle style thermostat that was installed around 1997 that looked like this: 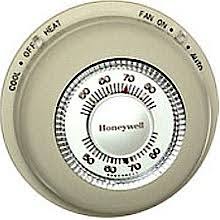 With a 2003 Honeywell 5+2 day thermostat (see picture below) and it has served us well for 15 years, but the touch pad behind the cover was starting to show its age.

So this week I bought an Emerson Sensi Wi-Fi thermostat with back light! I believe it is their 2015 model, as the newest one for 2017 has fancy touch screen, which I think is overkill for a thermostat. I still like buttons on stuff, if possible. :)

Just got done setting up my android app, and giving it a test run. I’ll will be configureing it with my Amazon Echos later tonight. Talk about a huge upgrade! 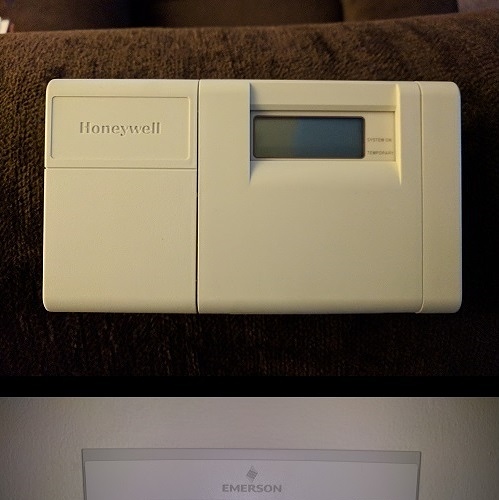 Hmmm. Replaced our thermostat a couple of weeks ago - didn’t occur to me to post about it to the world. :)
Must be a generational thing…

But as long as I’m here - I specifically avoided a wifi thermostat - really didn’t need a thermostat to show me the weather forecast on a screen. That gets the “what do I do on my phone and what do I get up and walk over to the thermostat for” thing bass ackwards. We program the heating and mostly leave it alone to do its thing, and the cooling we typically leave alone at one set temp.

The most interesting part of the job was that there are so many old holes that there is barely enough drywall left behind the thing for drilling new screw holes. Any future new thermostat that doesn’t use exactly the configuration of this one is going to require starting with patching up the wall.

I see this one is sub $100. I am not sure what is different from the model I got.

Replaced our thermostat a couple of weeks ago

What did you get?

Whatever is the current Honeywell 5/2 programmable, non-wifi, 2-stage-compatible that they sell at Home Depot.

We bought a house a few years ago that had a tankless
water heater. A couple of months ago, it started cycling on and off all the time. I tried calling a few local repairmen and every single one said “no thanks, we don’t service tankless”. One even told me that I should go on the manufacturers website and see who the authorized repair companies were. Which was funny, since that’s how I got most of those phone numbers.

The good news is that the water heater could still work in limp mode. It couldn’t even regulate the temperature but it would try its best to heat it up to 120 (and no greater). So it basically didn’t impact us too much. It wouldn’t last forever in limp mode but it could possibly last months in this mode.

Anyway I ended up on tech support with the manufacturer. They said I needed a new logic board. I popped open the cover and saw that some capacitors were definitely bulging. A common problem with this model apparently. So I agreed and they sent new one out. Unfortunately we were out of warranty, so I had to pay full price for it. And then they shipped the wrong one, which they corrected but also forgot to tell me I needed a program chip, which got shipped out after that. I finally had everything I needed after a few weeks of waiting.

Swapping the board was no worse than swapping a motherboard. Even easier, actually, since every connector was unique and there was no way to plug it in wrong. I went through the process of maybe 20 steps to get everything flashed and configured correctly (thankfully well detailed in the documentation) and was up and running in less than 30 minutes.

But I ended up spending almost as much as a brand new tanked water heater would have cost. The house wasn’t set up for a tank, so the installation would have been more than I felt ready to do (or pay for), but it still kinda irked me. The tankless water heaters are nice but everything is way more expensive.

Changed the oil on two cars. I’m not sure it qualifies as interesting, but I almost enjoy it. It’s easy, I save a bit of money, maybe $50 (full synthetic), and I get to do a guy thing. I have the ramps you drive up, so it’s easy and safe.

Nice! I haven’t changed car oil on my own in over 20 years.

I do change my mower and snow thrower oil though. :)

Changed the oil on two cars. I’m not sure it qualifies as interesting, but I almost enjoy it. It’s easy, I save a bit of money, maybe $50 (full synthetic), and I get to do a guy thing. I have the ramps you drive up, so it’s easy and safe.

I did that a bit on other cars, including my last one. I also change brakes and rotors, but I find that more of a pain. It feels good to get dirty sometimes.

Yeah, I’m going to try and do my brakes too, I just bought the piston compressor tool thing. Service prices up here in Canada are getting crazy, $800 for a brake job and it’s no wonder millenials don’t want to drive. That said, you need to enjoy it because there is squatting, crouching, contorting yourself to undo a bolt, sweaty hands in vinyl gloves… almost a yoga session by the end of it.

Yeah you bring up an excellent point. There are tools you need to use when doing tasks like this and without them you can find yourself with a car half broken down and no way to get it back together again. For brakes I have a caliper squeezer, break-free, two different kinds of loctite, several different sizes of socket wrench heads and various connectors for mine (because they make it as hard as possible to get in there to loosen things sometimes.)

Not to mention a good jack or two, jack stands, etc. The cost of all that will certainly go a long way if you use it a lot. But for a single brake job it’s equivalent to paying even more than the dealership. :(

Yeah, I get other people to do almost all of my car work. God, changing the battery in my 2010 Journey is a $200 process (mind, some of that is the battery) just because the whole front end basically had to come off to get to the blasted thing. Who designs this shit?

Who designs this shit?

The people who know your battery will last slightly longer than warranty :).

Who designs this shit?

The running joke for a lot of car brands (looking at you, Audi,) is that step one of any maintenance is: Disassemble front end of car. That is sadly true in a lot of cases.

I remember my father sitting … SITTING in the engine bay of his old ford pickup and working on the engine. Design engineers today have the task of fitting way too much into way too little space.

Finally got off my ass to repair a mate’s speaker that was reportedly blown. I was an Yamaha AST-S1 Servo-Active jobby circa 1990. By all accounts a reasonable piece of kit when paired with the complimentary amp.

You can slot a non-servo-active module in the amp and apparently the speaker blew upon using one or other of the modules, after a previous repair no-less.

I have been sitting on it for a while on account of worrying that the servo-active tech would be beyond my skill to delve into, but turns out is is all amplifier-side and the speaker itself contains nothing more that a pretty standard 2-way 2nd order passive crossover: 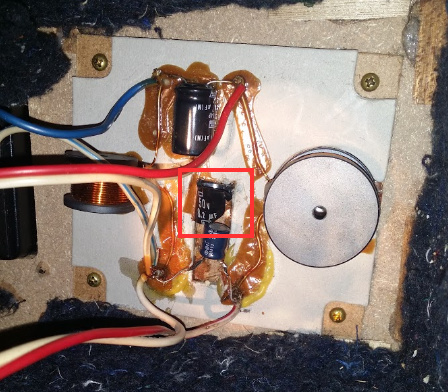 Problem area highlighted - blown cap. The previous repair is in place in this pic, but who-ever did it used an incorrect capacity replacement, citing apparent difficulty in finding the right value. $5 +$15 shipping later I had a couple on-route out of south-east Asia.

Upon arrival and seeing nothing obviously wrong with the original repair, I plugged them into an amp to see if they were actually kaput and they (predictably) worked just fine.

Anyway, pulled the crossover and replaced with a correct value one since I had the part anyway and no point having a pair with mismatched frequency cross-over points. Biggest pain was not being able to find any damn fluxed solder, so the job was sub-optimal. Anyway, all back together now. I should really drop him a line and make sure they are working!

Procrastination - thou dost be mine middle name.

Another one I put off for-fucking ever. Stupid sliding door latch would get caught somewhere internally and prevent the key barrel from locking the mechanism. 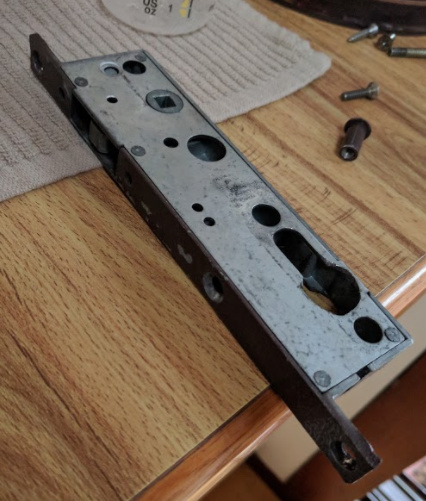 I suspected I would be able to find a drop in replacement and sure enough, when I got off my ass to get to the local hardware store, there were several drop in options. Replacement took the same amount of time as it had been to dismantle and manually jigger the failed unit to get another couple of weeks of service - an action I had taken about half a dozen times!

This is what happens when you don’t fix your sliding door! Damn cats guilt tripping me! 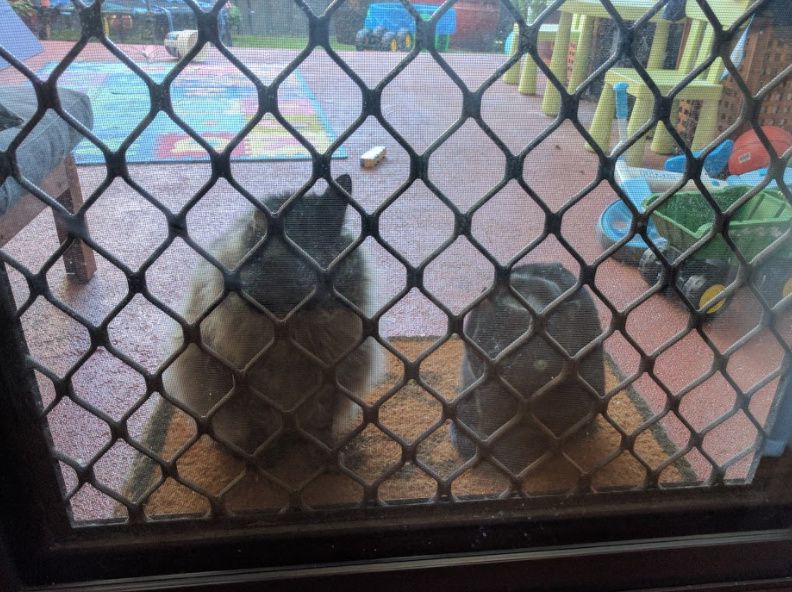 Your mate is very trusting if he’s having electronics repair done by someone who doesn’t even keep solder laying around…
Apparently those speakers are pretty blah unless paired with the matching amp and the active module.

I remember my father sitting … SITTING in the engine bay of his old ford pickup and working on the engine. Design engineers today have the task of fitting way too much into way too little space.

Yep. I can remember when dropping a tool in the engine compartment meant that it would hit the floor. Not anymore.

The buzz is almost always the bulb going bad. You’re hearing an arc in the tube. The ballast can go bad in a nasty way. Usually meaning a bad smell and then brown liquid leaking. Maybe a fire.

You’ve got to take off the whole front fender, which has something like 8 or 12 little, easy-to-lose fasteners, to start the process of changing a Toyota Yaris’s front light replacements. It’s fucking stupid.

I spend a lot of money on car maintenance in this household :(