Telltale's Guardians of the Galaxy

Eurogamer confirms it and says the official reveal will be at this year’s The Game Awards show.

Ah, now this - this I will play. I can imagine they’ll integrate humor into the story much like Tales from the Borderlands, which I enjoyed very much despite not having played the other games.

Just have to add that the general consensus around the internet is hilarious to me - all these gripes about the engine they use, and the frames per second dips has people saying they’ll never play them. Did anyone care about FPS in the old LucasArts/Sierra games? When did this happen?

I think anyone that obsessed with FPS is clearly extremely stupid and doesn’t deserve good games anyway. That is surely just a tiny subset of loons though right?

This is a game I would be very excited to play, excellent news!

Indeed, if anyone says they refuse to play a Telltale game because it can’t get steady 30 fps, there’s not much better name for that than “loon.” 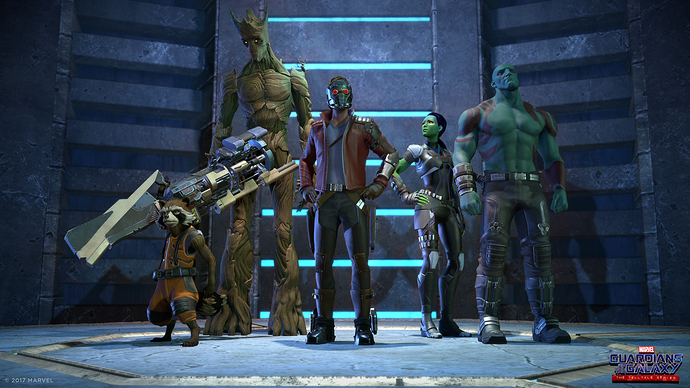 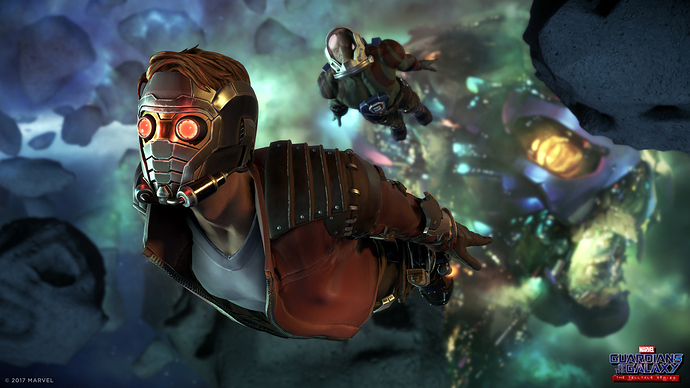 [quote]
The series will feature a star-studded cast of voice talent, including Scott Porter (Friday Night Lights, The Walking Dead: The Telltale Series) as Star-Lord, Emily O’Brien (The Young and the Restless, Middle Earth: Shadow of Mordor) as Gamora, Nolan North (the Uncharted series, Pretty Little Liars) as Rocket, Brandon Paul Eells (Watch Dogs) as Drax, and Adam Harrington (The Wolf Among Us, League of Legends) as Groot.[/quote]

We Are All GROOT!

I haven’t played their Batman or the current Walking Dead, but I had heard (maybe incorrectly) that Telltale was working with a new engine and trying to make their games feel a little less “samey.” Has that been the case? Or do their recent games still feel pretty similar gameplay-wise?

I don’t believe any of Telltale’s recent games have utilized a new engine, but I may be wrong. I can say that some recent games like The Walking Dead: Michonne and Batman have involved a bit more “action”; which is to say pretty much QTE events.

Telltale Tool, their proprietary engine, got an “upgrade” for Batman, but it hasn’t significantly changed. There was a lot of speculation that with Kevin Bruner stepping down as CEO, the company might move to a more modern engine, but nothing has been confirmed.

I am not sure just why, but that trailer did nothing for me. Maybe it was trying to hard to be just like the movie, and some of the lines fell a little flat? I’m not sure what my problem is, I thought I’d really be into this, but the trailer somehow murdered my interest.

To be honest, I ended up feeling the same way. I love the movie. And I can’t wait for the sequel. But the game? Not so much.

Played the first two episodes over the last week. There’s a chuckle every now and then, but it’s a middling effort, in my opinion.

I think one of the weakest parts of these games is when it puts you in the position of having to play favorites between two characters. I remember there being a bit of that in the the first Minecraft season and it kind of smacks of high school or reality tv or something. Contrived conflict to add drama, driven by unearned character relationships. Minecraft overcame that, especially with the adventure pass episodes - but Guardians of the Galaxy is doubling down on it, unfortunately.

The game is just kind of a drag. It wants to dwell way more on family dynamics and character insecurity than it does on having fun. Instead of going on an adventure with Drax, Gamora, their pet and their pet’s houseplant, it’s more like going to therapy. Drax is moping, Rocket is moping, Gamora is moping. The game doesn’t know what to do with Groot. And it’s not a sign that all is well when Yondu is scene stealing.

I’m sure I’ll play through it all, but I hope the latter episodes lighten up and pick up the pace.

I’m sure I’ll play through it all, but I hope the latter episodes lighten up and pick up the pace.

… and the last couple episodes were a step up, I guess. Even if the penultimate was mostly wheel-spinning; I personally enjoyed the game distancing itself from the main story for a bit, which wasn’t holding its own, anyway. Ultimately the writers don’t pull off what they’re trying to achieve with this series. The infighting between the main characters is too big a cornerstone of the experience they’ve crafted and the friction runs counter to making the experience enjoyable as well as drowning out other story lines and themes that arguably were intended to have the same weight to tie things together. Just doesn’t work.

Seems like this should have been a good fit for Telltale, but the writing just isn’t good enough.

Looks this is on sale for $10 on Xbox marketplace and presumably other formats. Do I want this?