I don’t really know what I’m making yet, but playing with some simple crowd dynamics and lasers.

I also checked how Unity does with exporting to HTML5 since I hadn’t messed with it before. Seemed to export fine! However, it takes a REALLY long time. If you do end up using Unity, I’m having fun with this in-editor GIF recording tool: https://github.com/Chman/Moments

That’s awesome! I need to fire up Unity and brush up on the changes since v.4. Let us know if you have a GitHub (or other online) repository for your code. It would be fun to check it out.

I have two ideas that I want to work on. Both are small and pretty simple but both require the participation of my daughters for some content. If that ends up being too much of a limiting factor, I’ll come up with something else this weekend.

I’ve really wanted to make an inklewriter based adventure for some time. Maybe the time is now?

I don’t really know what I’m making yet, but playing with some simple crowd dynamics and lasers.

I’ve always thought that there is a neat game idea buried somewhere in flocking/crowd dynamics behaviour, but I haven’t revisited the field since grad school.

Let us know if you have a GitHub (or other online) repository for your code. It would be fun to check it out.

I put the repo up here: https://github.com/porousnapkin/CrowdGame
Everything’s still pretty rough, but feel free to steal from there if there’s something of interest.

I made a fun explosion animation. Dodging circles feels pretty much the same as giant rectangles, but visual variety is nice:

Also experimenting with units with special abilities. There’s some spawners in there that add new units to your crowd every second.

And here’s an enemy that chases you. Just a death field that moves towards the center of the crowd.

I’m thinking it could cool turn some of your crowd into fighters who can go kill the enemies. Because they’ll chase the enemies rather than the center of the crowd, they’re a management liability. Might be fun as the next experiment.

MOAAR. I mean, that has to be the purpose of the thread right? We like seeing updates from other developers. The whole game at the end is just (unlikely?) icing.

So nice timing on the thread creation, I just started back in on a project I abandoned awhile ago. I had found a cool little dungeon crawler for graph paper that’s a mini roguelike and thought it would be fun to try and implement. I haven’t asked the original author if they would be cool with it yet though, and I don’t want to until I get a proof of concept working for the rule set. So mums the word on the rule set until I get a bit further.

I was attracted to it because of the complex set of interacting rules and I wanted to try and implement it in a sane way. You know, like every other roguelike or AD&D like game. So that’s the primary goal, and I haven’t even started in on it yet, I have been just toiling on the base engine so I can see output first.

Which would be fun if I didn’t hate CSS so much. For giggles I decided to try and do a responsive css/svg interface and fuck me is it fiddly. There was only so many times I could bang my head into the table trying to get some of those crazy css tricks to work. Finally said screw it and fixed the issue in 5 minutes of javascript.

So far you can walk the map turning around cards that are generated randomly. So now that I have the base done I can start working on the actual rule system next. 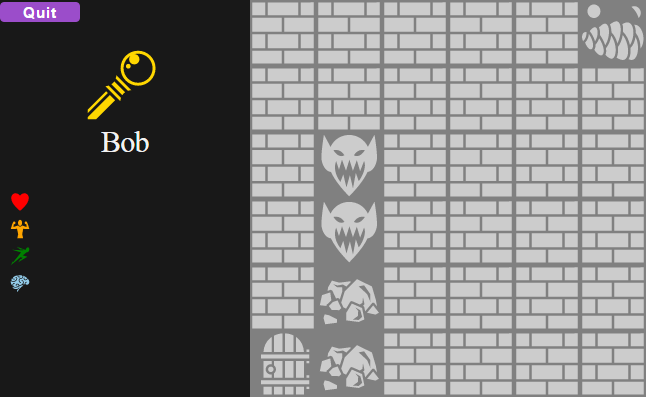 This thread is awesome.

It’s great! Please keep it up. I cloned your repo and ran it locally in Unity. Just to throw a twist on what you’re doing – I thought that the point was to try to get the flock into the laser as quickly as possible. I tried to destroy them all as quickly as I could. :)

On my own front, I’m going to have to shelve the ideas I had of working with my daughters, I think. One idea was to make a short game about putting my younger daughter to bed where you have to select responses with the proper tone to keep her focused without allowing her to procrastinate, all the while trying not to lose your sanity. It’s a daily game that we LARP at home.

Instead – I have an idea where you play as a gate agent at an airport and you have to determine the boarding order of the people at the gate to try to load them all on the plane as quickly as possible. However, they’re all free agents and do things like cut in line to foul it all up. That’s the one I’m going to work on.

Sure, I’m game. Doing it in JS and HTML Canvas. No cute animated gifs yet, but here’s my initial design document. I’m sure the holes in it will become obsolete an hour after I start programming, but it’s a start :)

That sounds fun! Will there be a different map every day or something? Kind of like the Spelunky Daily Challenge? Also – what will you use for the leaderboard? Firebase?

I’m having trouble figuring out a good idea for a game. Most of my ideas are straight clones from existing games (like Devil Daggers or One Finger Death Punch), or match-3 games, or something similar. I’m hoping I’ll have some better idea at some point. :)

I’m having trouble figuring out a good idea for a game.

I think starting with a clone is a great idea. You’ll find a million ways to make it different along the way and probably make something not even clearly inspired by it. Technical problems can help a lot with pushing you in new directions!

I have a fun idea (probably not a compelling and certainly not a balanced game, more of an experiment on feel) but I won’t be able to start until late February.

It should be super easy to implement, though.

[quote=“Clay, post:32, topic:127958, full:true”]
That sounds fun! Will there be a different map every day or something? Kind of like the Spelunky Daily Challenge?[/quote]
That’s a good question! I’m actually not sure. My suspicion is that while a lot of games are trying to get longevity with daily/weekly challenge modes, it isn’t actually working except for a few hyper-popular games. For example the weekly Infested Planet leaderboards were just pitifully empty when I played it late last year.

Meanwhile something like Devil Daggers with its single map had a really satisfying score chase. Sure, not a lot of people were playing it anymore at that point. But it didn’t matter when the board already had 20k entries on it. Improving your time by 0.1 seconds could improve the position by hundreds of spaces.

A pie-in-the-sky design might be to have a yearly, monthly, weekly and daily map. That way there’d always be a fresh map to play for returning players, but also some maps with proper leaderboard density.

Also – what will you use for the leaderboard? Firebase?

I’ve already got a server running all kinds of random stuff, so I’ll probably host it there and just stuff the data in Postgres. The server-side should be the trivial part of this.

Right now I’m playing a Python game called “Your Dict Is Too Big It Will Not Fit”.

Are you making a game for this in Python? Are you using pygame or renpy or something?

No, for another project, animation related. Was just making a python joke. Sorry. :)