I can’t be the only person here watching Terrace House.

A couple of key differences from American reality TV:

While there’s always something lost in translation, the show is almost astonishingly well translated. Additionally, the hosts being injected in real time provide a level of cultural interpretation in addition to just textual translation. You don’t know how to interpret somebody’s awkward response to being asked out on a date? Just wait for the hosts’ reactions and they’ll tell you if it was a savage burn or nervous tittering. The panel is also great because it creates a sense of instant community with the hosts, like a real-time podcast about the show during the show.

Some knowledge of Japanese culture and language is obviously super helpful in getting the most out of the show. But they aren’t required at all. The more you know about the language and culture, the more you can form your own interpretations and disagree with the hosts. But the blind/guided experience is also great in its own right.

I watched two seasons of Aloha and a couple of eps of the Boys + Girls one!

It took a while to get into the hosts but then I started to recognize them and see them pop up everywhere.

I went on a marathon and felt very weebish (i am a weeb in denial.) I think I found out because of some NPR article that described it as a reality show where nothing happens yet it’s incredibly compelling to watch. I don’t watch a lot of reality shows, but this show seems pretty sincere. Well, some of the people seem pretty sincere and easy to read. Reading fan reactions is also interesting - people call out certain behavior as really bitchy for example and I had no idea because it goes right by me.

I haven’t watched Aloha State, because it’s apparently the worst of the new seasons, in that it’s the most American, and so it kind of falls apart into Western reality TV territory by the end.

This is one of those bizarre things, because I’ve heard this used to describe a lot of shows (e.g. Mad Men). “Nothing happens” except people interact in human relationships. It’s like, one of the primary things that humans do…and yet it’s dismissed as “nothing” because it’s not dramatic enough.

I’m not calling you out personally, because as noted above, it’s a fairly common criticism of a lot of shows…but I wonder sometimes what people expect to happen?

Reading fan reactions is also interesting - people call out certain behavior as really bitchy for example and I had no idea because it goes right by me.

This is definitely something where the nuance of Japanese language and culture comes into it. There are definitely scenes where the room is just ablaze with passive aggression (or even just plain rude-ness), but it can be easy to miss if you don’t know what you’re looking for. While I can pick up some of it, my wife speaks Japanese, and serves as supplemental translator for me.

except people interact in human relationships

Seriously though, i think I’ll watch this show now. Sounds like iron chef plus real world.

Because these are real people with (mostly) real jobs (many of the housemates are students or work part time and keep odd hours), one of the main things they do together is make and eat dinner, or go on dates to restaurants. So, while it isn’t a focus, lots of delicious looking Japanese food gets featured.

I’m a huge fan of Terrace House. If you enjoy the Netflix seasons, you should seek out the original series. There is an ongoing translation project at Tecchan’s House. They recently completed seaon 7, so only one season to go. The Japanese episodes have amazing music and the most sublime moments of nothing happening. 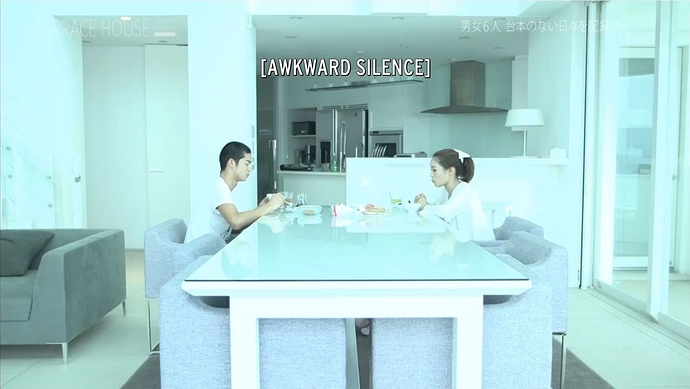 I am confused by the concept of reality tv from a country where basically every single social interaction is scripted. 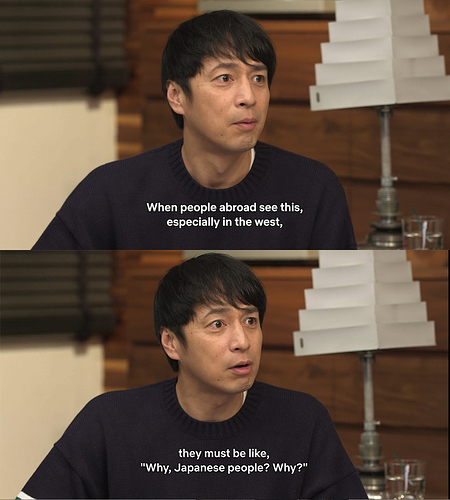 I am confused by the concept of reality tv from a country where basically every single social interaction is scripted.

So, this is actually one of the reasons Terrace House is so interesting.

In Japan, because social interactions are so tightly proscribed, people construct various different social personas that they apply in different contexts. It’s Seinfeld’s Friend George / Relationship George as one referent, or alternately, the generalization of the way that Japanese speech has very formalized different grammar and vocabulary for addressing different people.

One of the less obvious background notes in Terrace House is that Japanese people don’t typically live with room-mates. The stereotypical Japanese apartment is a very small 1 person studio. Basically, sacrificing space for privacy.

So, the people who live in the house experience the clash of 3 or 4 very conflicting personas:

Now, none of this is unique to Japanese society per se. However, the degree to which these are heightened and the distinctions are made explicit make them unlike what you typically see in American reality television. At least one cast member in the Netflix seasons essentially had nervous breakdowns from the stress of continuous performance (some people clearly compartmentalize it better than others). Another had a very explicit disconnect between the way she “should” behave as an entertainer, and the way she actually wanted to behave, as a person, to the point that the the two-faced-ness became a point of contention with her housemates. It should be noted that most of the house members are in or adjacent to the entertainment industry, so many of them are at least somewhat prepared for the reality of continuous performance. But even then, the microscope view of social behavior leads to some rather unique outcomes.

On the other hand, it can also be watched totally sincerely as a shoujo dating anime. It just contains a great range of experiences.

I can’t be the only person here watching Terrace House.

Thanks? I started watching because of this thread and now my wife is trying to mainline all the seasons at once. 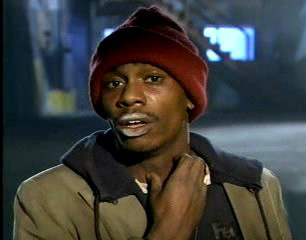 I’m a huge fan of Terrace House. If you enjoy the Netflix seasons, you should seek out the original series.

We even started watching the original series, but the first two seasons were kinda hard to watch. We mostly watch for the commentators, especially Yamasoto. As soon as he and the rest showed up it was instantly a thousand times better.

…Yamasoto. As soon as he and the rest showed up it was instantly a thousand times better.

This has got to be the guy with hipster glasses who makes all the mean comments. 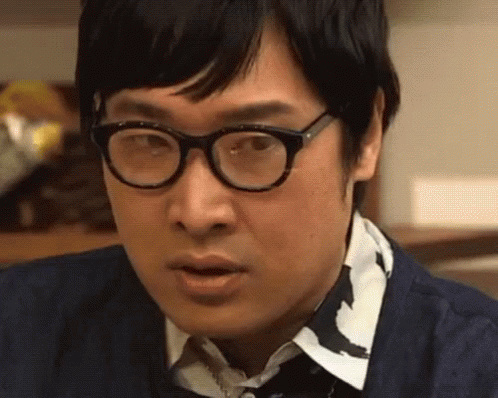 This has got to be the guy with hipster glasses who makes all the mean comments.

Yes. He is god damn awesome. All of them, outside of the rotating young person they invite, are pretty great. It’s hilarious when someone misses a show for whatever reason and the dynamic changes. Yamasoto yelling for Reina (normal mitigating prude presence) to come back because the rest let loose with crude comments, his normal bailiwick, was just perfect.

I was thinking there would be more of a cultural disparity and the commentators would fill in the blanks, which does happen but much rarer than I was thinking. Most of the time we are just nodding our heads and agreeing with Yamasan.

Which made me realize that yes, we must be judgmental pricks too.

It’s not judgmental when you’re right.

Right? Tsubasa is the best. Shion is a close second.

I never would imagine that I’d ever binge-watch a whole season of a reality show and be so glad I did. And the commentators are awesome.

I started watching Boys and Girls in the City because it looked like the first Netflix one. For whatever reason, it’s become what I watch when baby wakes up early. I can only watch a few episodes at a time, so it’s really lasting. Looks like there are two other seasons on Netflix, and if they’re all as long as the first one, that’s a lot of TV.

I love how understated it is compared to American reality TV. No obnoxious musical cues to signal drama. No crazy camera zooms or reaction shots (are the cameras hidden, or otherwise fixed into place? Everything is always shot from the same angles, and I don’t think I’ve ever noticed ANY panning or zooming).

And it’s just people talking, basically. The dates are the only parts of the show I could remotely describe as “gimmicky,” but even those are fairly grounded. Everything is just, like, roommates hanging out and chatting. The highest-stakes drama? Roommates ate Uchi’s meat he was saving!

It also helps that everyone is generally likable. There aren’t any bad guys. I like everybody. It’s just… nice.

Professional wrestler and Terrace House housemate Hana Kimura has sadly passed away at the age of 22. It seems likely she committed suicide. She had been subjected to cyberbullying because of her portrayal on Terrace House. The main incident that appears to have angered viewers revolved around a laundry incident. Per f4wonline.com:

In an incident on Terrace House filmed in early January, a male housemate named Kai washed his clothes while her outfit that she wore at the Tokyo Dome was in the washer and then threw it in the dryer and ruined the outfit. She lost her temper and slapped him hard.

(For reference “Tokyo Dome” refers to the WrestleMania of Japan.)

Kimura, a regular for Stardom, has passed away at the age of 22.

On a personal note, Hana Kimura was one of my favorite wrestlers. I first came to know of her in 2017. This just fuckin’ sucks.

She got hatemail because she knocked a hat off someone’s head? I guess I can believe that…

The magazine article isn’t the same as the quote.

In an incident on Terrace House filmed in early January, a male housemate named Kai washed his clothes while her outfit that she wore at the Tokyo Dome was in the washer and then threw it in the dryer and ruined the outfit. She lost her temper and knocked his hat off his head.

This is incredibly sad. She was one of the standout stars on the latest seasons, and a delight to watch.

Terrace House has always revealed a great amount about Japanese culture, both deliberately and not so deliberately. Even the recent Tokui-san tax scandal was a fascinating window into a whole bunch of media public figure /public image issues (also, in the light of the recent Pierre Taki cocaine scandal).

Several things leapt immediately to mind here.
Hana was half-Japanese and half-Indonesian, and segments of Japanese society are casually racist in a way that’s not commonly seen in the west. Japanese chauvanism in various forms us a cultural bedrock, and mixed race kids are often targeted by their peers in school, and are often bullied quite horrifically. So, there’s a definite racial lens that can be applied when considering the ferocity and volume of her online harassment, as well as an obvious gender lens (especially for a woman with a decidely un-feminine profession, which she even called out as a barrier to dating frequently on the show).

Terrace House made a deliberate decision to highlight more foreign and mixed race cast members to show a more modern Japan, and to appeal to international audiences, and I think they may also highlighted an element of Japanese society they didn’t really intend to.

Also, while she was quite young, considering it was an apparent suicide, I can’t help but wonder if even a 22 year old wrestler might have some brain damage/CTE from a youth of wrestling, considering that it was a family business and she likely started fairly young…

I don’t follow the Japanese language fandom around the show, but I’m kind of curious what, if any, relatively unfiltered comments Yama-chan may make about this on YouTube.