From the LittleIndieGames thread, way back in June of 2014:

The Bit.Trip guys have renamed themselves from Gaijin Games to Choice Provisions and announced a couple new games, including a realistic turn-based perma-death space survival game with dice and cannibalism. Looks pretty early, but these guys know how to deliver.

The game, Tharsis, comes out on Steam January 12th. I saw a Let’s Play by Quill18 on youtube and I have to say it looks like an interesting lightweight game.

The concept is that you control a crew of astronauts stuck on a spaceship heading to Mars - however, a disaster strikes, and suddenly your goal becomes to survive and keep the ship patched together so you can make it to Mars. I only watched a bit, so excuse any minor inaccuracies, but it appears the game is divided into a fixed number of turns; each turn one or more incidents happen to the ship, and you control the crew members as you try to patch things up as best you can so your flight can continue. Each crew member has a different strength, so determining who to send can be important. The mechanic of the game is die rolling (an incident has a score, of say, 20, which means you have to devote 20 pips off of dice to ‘fix’ it). Certain die rolls can have negative consequences, depending on the incident. There’s also hit points, stress levels, and hunger to worry about for your crew members. So it seems that you have to balance a bunch of competing needs/desires, all the while trying to fix up your ship so you don’t explode and die.

It’s turn based, so on each turn you send crew members (one by one) to an incident site, roll dice and determine what to do with them. Each ship module has a different function/bonus ability - so for instance if there’s an incident in the sick bay, the module’s bonus may be to heal everyone’s HP to max - and you spend die pips to power these up also. In addition you can spend a die roll on an individual ability (each crewmember has a different one of course) or you can put a die into “research” which build up points with which you can purchase bonus event cards. So there’s always four or so actions you can take with each die.

The game plays out pretty quickly (the entire game is only something like 8 turns long) and even a winning game will only take like 30 to 45 minutes.

Here’s a pic of an incident screen showing a bit of the look and feel: 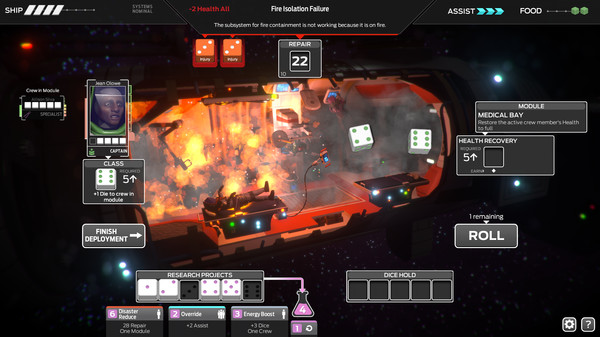 Here’s an outside shot of the ship, which is where you start each turn: 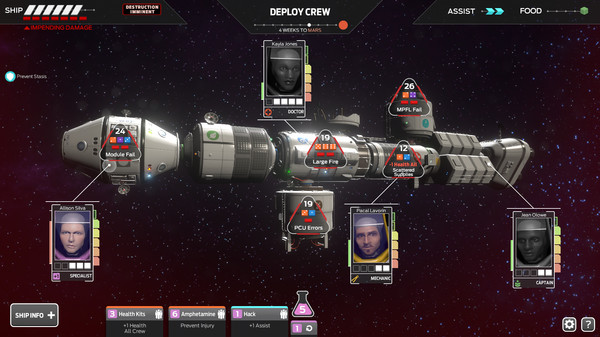 There’s also a storyline which is communicated through ship logs and some images. I’d guess this plays out the same every time, so I doubt it will add a lot after you’ve played through a few times.

I played my first game of this last night. Lasted 20 minutes, everyone died.

Yea I’m, into this too. Only thing is I’m not playing yet. I’ve got to wait till the twelfth. I love damage control and disaster mitigation, it was a hook in FTL and the mission to Mars setting is appealing to me. I don’t think this is the full Mars Expedition Sim I really really want, but it looks interesting and he’s name checking the right things in his Origin video on the Steam page.

This looks amazing…like a mashup of FTL, Ghost Stories, and Yahtzee.

So, apparently, this was developed with Zach Gage, who has made some rather nifty iOS titles like SpellTower and Sage Solitaire.

I’d personally prefer a game like this on my iPad than sitting at the computer, and think it much more likely it would get repeat playthroughs.

Yeah, in my play this didn’t feel like something I’d sit at a PC to play repeatedly. Not to say it’s bad of course, but it really felt inherently like a mobile game.

Yeah, in my play this didn’t feel like something I’d sit at a PC to play repeatedly. Not to say it’s bad of course, but it really felt inherently like a mobile game.

Oh wow, yeah, I could TOTALLY see this working as a physical board game.

This sounds very intriguing. Sounds like from the games podcast that Tom will be talking to the creators next week, that should be cool. I need to check out that Let’s Play but I am thinking I am going to need to get this one.

I just did my first run through last night and am enjoying it so far. Brutally difficult figuring out how to keep everything balanced but the actual game mechanics are very easy to grasp from the game’s brief tutorial.

The front page podcast is all about this. 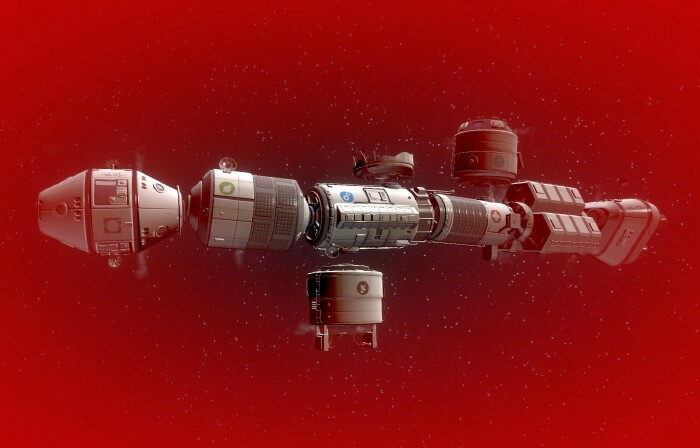 Join Tom Chick for a chat with the director of Tharsis, a strategy game about flying a disastrously unreliable ship to Mars that isn’t even called the Tharsis.

It’s also 34% off so the price is less than $10 USD. Seems like a good price point. Boughtened!

I got a game and a half before I left for work. I agree that they’ve got a very good UI going and oh boy you don’t want to discount anything it’s telling you. The proper way to play is just a little out of grasp yet but I like to think I’m learning. Things like even with out a sysfail you may want to leave an event be and do read all the module and crew capabilities and for Pete’s sake use them.

My kind of game! I’ll be casting a couple of runthroughs right now if you want to stop by: www.twitch.tv/eddyvegasgames

In two playthroughs, I can already feel the panic/anxiety start to set in like it did with FTL. Ugh.

In two playthroughs, I can already feel the panic/anxiety start to set in like it did with FTL. Ugh.

Is that good or bad?

Kind of sounded like one of those “good” bad moments… :)

Ok, avoiding the game then. I don’t need more of that.

Yeah, I always get very, very wrapped up in what I’m playing, to the point where I care enough about the well-being of characters that their death in games like this really affects me, because I feel really responsible. It’s easier not to play, as Joshua says.

Yeah, I always get very, very wrapped up in what I’m playing, to the point where I care enough about the well-being of characters that their death in games like this really affects me, because I feel really responsible. It’s easier not to play, as Joshua says.

You must have hated Final Fantasy VII. ;)