I should probably give Atomicrops another spin after cracking year 10. I’ll be as rusty as an old hoe now.

Hello, Pretenders! We have some incredible news for you today! We are very excited and proud to announce that Curse of the Dead Gods will be leaving Early Access on February 23rd of 2021! That’s right! We are planning our full release for next month...

Interesting, thanks! Damn, they should pay you for the update news work you’re doing.

Haha, or at least a title: Chronicler of the Action Roguelite.

They could rename the game to Hades: Someone turned off the lights.

This ancient, by forum standards, post convinced me to try this one, which I had previously dismissed based purely on the ridiculous name, out. It’s about ten bucks right now. Will hopefully report back some of my own impressions.

With roadmaps like those, has any review site solved revisiting changed games? I think that’s one reason I like to wait for a game to release, instead of playing in early access. It will be evaluated on release, and I can browse known perspectives at a fixed point in time.

Anyway, it looks like I’ll be playing at least a couple of these this year. I’m also interested in your impressions Kolbex of I, Dracula: Genesis.

My first impression is that there’s something about the way the sprites flicker or pulsate that makes me a little woozy. Not…great.

This is near historic low on GamersGate so I picked it up. So far so fun!

FYI, nova drift is also 45% off on steam

There’s too many seemingly good action roguelites for me. Any must have? FYI I really enjoyed Synthetik and Hades is my GOTY 2020. I’ll get Nova Drift since it’s only $4 after conversion.

It still is! I think I really suck at that game though. After 20+ hours the best I could do was defeating only 2 bosses. End game still seems a long way to go.

If you already have Hades, Dead Cells.

Risk of Rain 2 is pretty good too, but I feel it is more idiosyncratic. Very based on random builds and rushing.

I also like Streets of Rogue but it’s kind of a different game to most games talked here?

There’s too many seemingly good action roguelites for me. Any must have?

Yeah I know what you mean. I’ve bounced off quite a few, including Spelunky, Binding of Isaac and Synthetik (I should probably give it another go, but there were a few things that rubbed me the wrong way, can’t remember what now though).

Atomicrops, alongside Hades, made my Quarterlies top 5 so obviously I’d recommend checking that out.

I’ve got the demo of Going Under installed so really want to give that a spin at some point. Kind of enjoyed Noita but didn’t feel much tug to keep at it. Risk of Rain 2 is great, particularly if you were a fan of the first game’s loop, characters and crazy item stacks and synergies. Old but gold: Dungeon of the Endless. Seems Amplitude are kind of returning to it with Endless Dungeon so I can’t wait for that.

Synthetik to me has the tightest controls of any of the action roguelites I’ve played, but it’s hard as hell. I, too, despair of ever finding, let alone destroying, the heart of armageddon. I also wish I could switch eject and reload to shift and dash to space, but there doesn’t appear to be any way to assign two functions to one key, so I’m stuck with the default binding, which very often leads me to eject a full magazine when I’m trying to dash away from danger.

Big fan of Synthetik here as well! I’m not usually a fan of active reloads, but the eject/reload and the shooting is just so satisfying ! You can absolutely bind eject and reload to the same key - at some point I found space bound to eject and reload (it was under the alternative column of the keymappings) and shift bound to dash, but I just tried flipping them and that works.

Edit: Still the best gunplay in a game ever! Also, the Synthetik Ultimate update dropped around Christmas last year so it’s a great time to check it out again!

Oh, I didn’t try binding them in the alternate column, I’ll give it a shot.

There are two roguelite FPS with cartoon graphics and metaprogression in EA, both are cheap (between 10 and 14€) and both have Overwhelmingly Possitive steam reviews : RoboQuest and Gunfire Reborn. I’m intrigued by both and by the mere fact games that similar are being developed in parallel, as if people in different parts of the world noticed there was a market for this, so I decided to try them for ~80-90 min each, and refund them if I’m not convinced, or keep them, or maybe wait until t hey are out of EA.

RoboQuest has very nice gunplay feel for a indie game and despite the variety on weapons, which seems pretty good. There are uzis, sniper rifles, dual pistols, ak47 clones, grenade launchers, flare gun, carbines, shotguns, throwing knives, dual crossbows, laser pistols, beam weapons and more. Movement is silky smooth, too.
However, the combat itself is just decent, and it’s a pity because it could been better.

The first issue for me is the double combo of 2 weapon limit + infinite ammo. Technically, there is a starting artifact you can choose to increase the limit to three, however that means giving up another weapon. I would have made the base game limit 3, and 4 with the artifact. In any case, the biggest issue is no having ammo management whatsoever.
It also doesn’t have a quick grenade throw button. Well, in fact there are no grenades. Come on, if you are going to copy Halo/Borderlands combat, at least copy all of it. This, together have no ammo management, makes the FPS experience feels more sparse and basic, it’s all about just shooting accurately and avoiding enemy fire (all enemies are projectile based) quick enough.
You at least have a single ability that you can use depending on your class, and well, it’s all a copy of stuff we have seen before: stealth for a few seconds + extra damage or first short, put a barrier you can shoot through, deploy a turret, etc. It was dull when Borderlands 1 did it many years ago, and it’s even more dull now.

The second issue is the enemy design and variety. First problem, like the title indicates, it’s all robots as far as the eye can see. The don’t react to being shot with pain states, nor shout, nor there is gore, and I know this is making me sound like a psychopath lol, but it lost some part of the visceral feel that other games have.
The second problem is that most basic enemies are very similar and there isn’t a lot of types. The three basic robots are almost interchangeable, after that we have a turret that is just a turret, and a flying one that it just hovers not doing a lot. They all move slow, and they shoot similar projectiles, with similar RoF and projectile speed.
There are advanced versions of the enemies that are slightly more interesting and more differentiated (although still nothing great), they appear from the second world onwards (after the first boss), butt the first world is dull as hell after the first 7 or 8 playthroughs. Later there are levels with a single new enemy. Still not enough imo, they need 4-5 more enemies, and more interesting ones at that. Where are robots that are able to charge at you? Where are the robots who can repair their allies? Or use stealth camo? You get the idea.

Something I liked is the enemies dropping xp orbs upon killing them, you only have 10? seconds to collect them, so you can’t play passively firing from afar, or you will miss the xp.

The build variety is also not very good. You have three slots to put cores, that are just +1, +2, +3 bonus to two stats (see image) 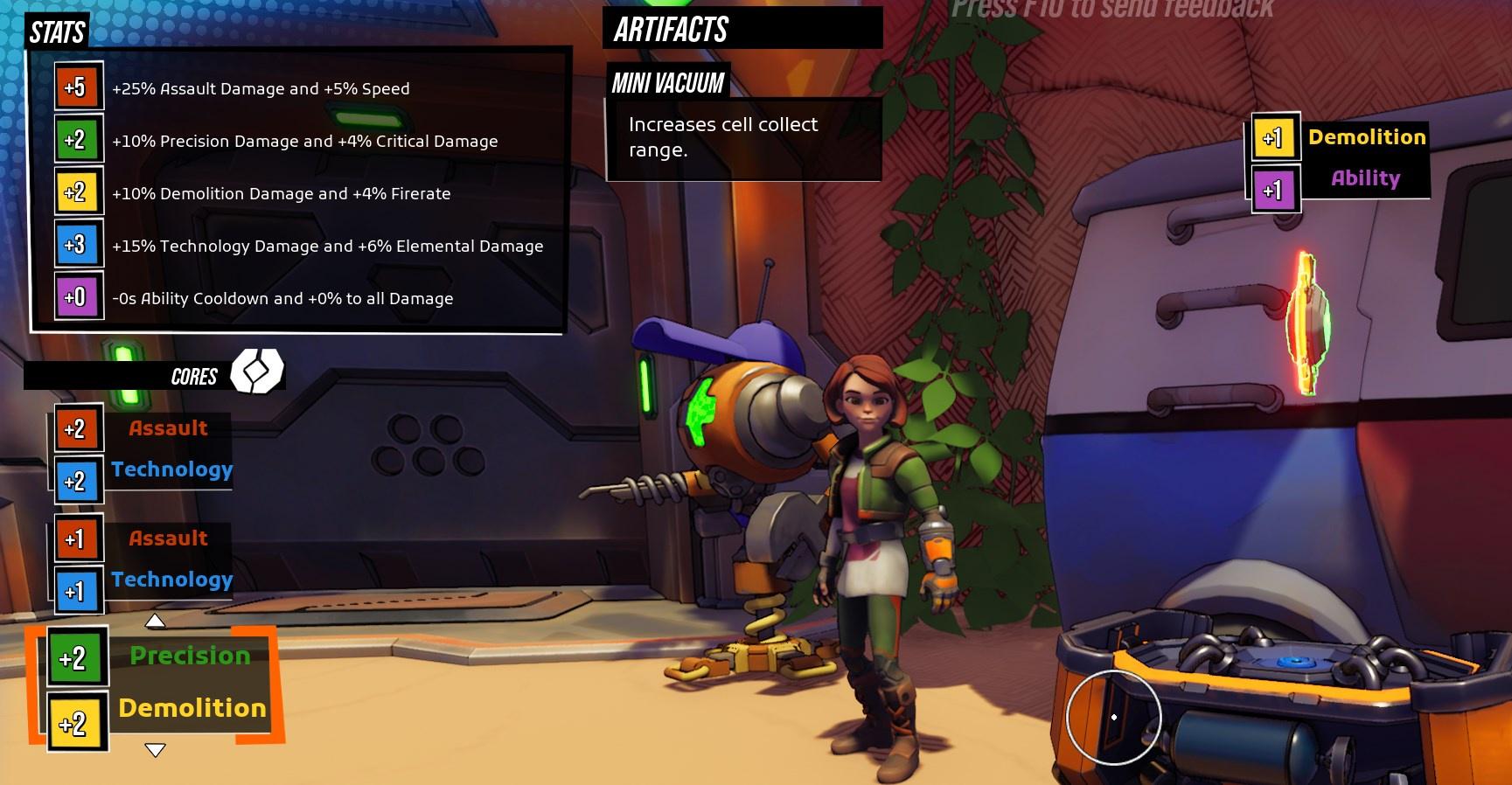 which produces a way of playing that usually is just “pick the highest rated cores the RNG gives you, and then limit yourself to shooting weapons of that color”, hurting weapon choice even more.

You also gain a perk every time you level up, but many are things like “+% dmg to non elemental weapons”, or “+dmg to melee”, “+% dmg in close rage”, “critical dmg increases when you don’t crit”, “crit has a change of doing shock dmg”, stuff like that, I don’t find them particularly interesting. One allows you to have a shield like in BL. Some examples

I really want to like “I, Dracula: Genesis” (and I really don’t want to type out its title), but the combat is not quite, so far, doing it for me. I am definitely gonna give it a fair shake, but I can’t yet make an argument for it (beyond the utter zaniness of its visuals) when both Hades and Synthetik are sitting in my library.

Yep, the core combat isn’t as good as those games. They have to improve it.