Another thing I wanted to ask to previous Spelunky players is if I should skip the first game because the second part is ‘the same game, but with more’, or if instead, it should be played.

So here’s the thing: Spelunky 2 includes many of the areas from the first game, but they’re redone in a very different way. Personally, I would say play it – even though the areas are there in the new game, they’re different enough that 1 gives you a different experience, and Spelunky 1 is a lot of fun. I don’t think anyone can make the case that 2 is ‘better’. It’s bigger, it has some different design decisions, but Spelunky 1 stands on its own as well.

However, getting good at these games requires a lot of time and effort. I personally really enjoy playing some rounds of Spelunky 2, dying (as I learn from my mistakes), then going back to Spelunky 1 and easily beating it since I know it so well. But if you don’t know both games, I think you’re better off focusing on one of them. Plot-wise… Spelunky 1 has no plot really, and 2 has a little bit of lore, so you’re not missing out on anything there. But 1 is still awesome.

I hope that helps somewhat.

You can still download the original free version of Spelunky.

I still prefer the original cave music over what I heard of the newer OST! 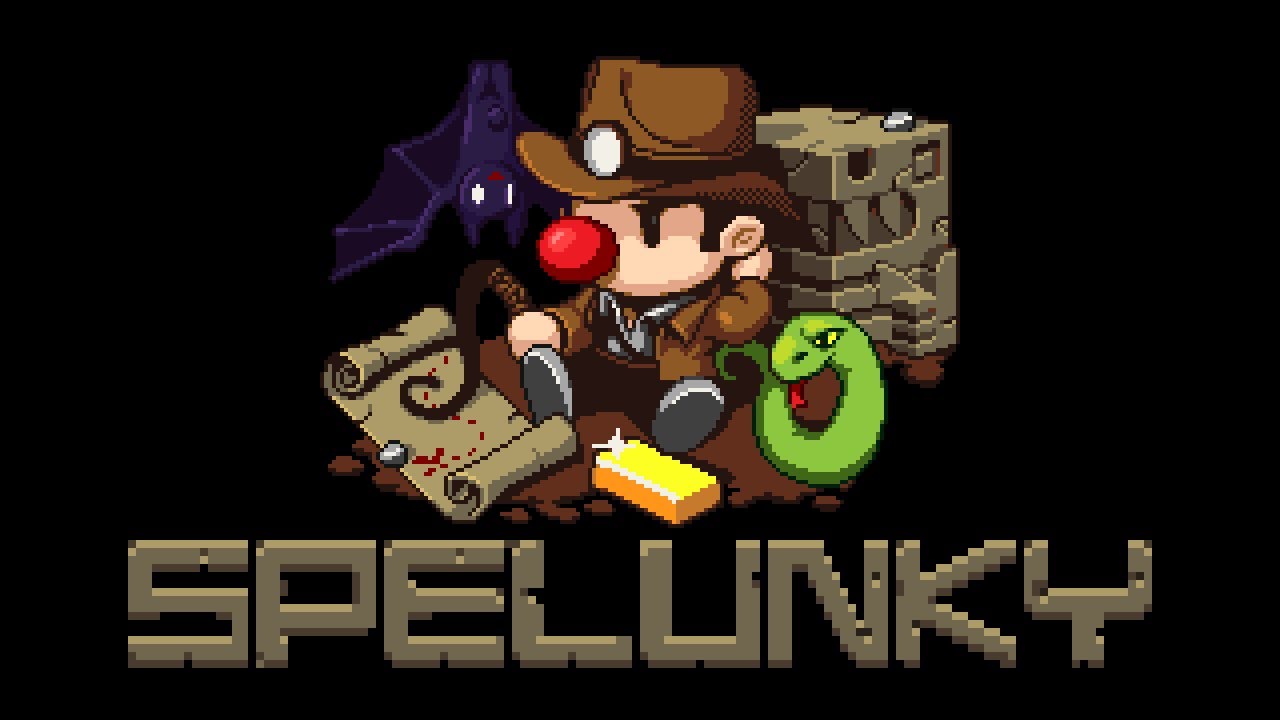 This music got etched into my brain. I was genuinely mad when Spelunky HD didn’t use it.

Spelunky never really clicked with me overall but I fondly remember that music (and the little procedurally generated story intro vignette).

I have the Steam version. And this doesn’t answer my question.

In that case, I do recommend playing it. Spelunky 2 is harder, and if you don’t enjoy the original I wouldn’t suggest buying the sequel. 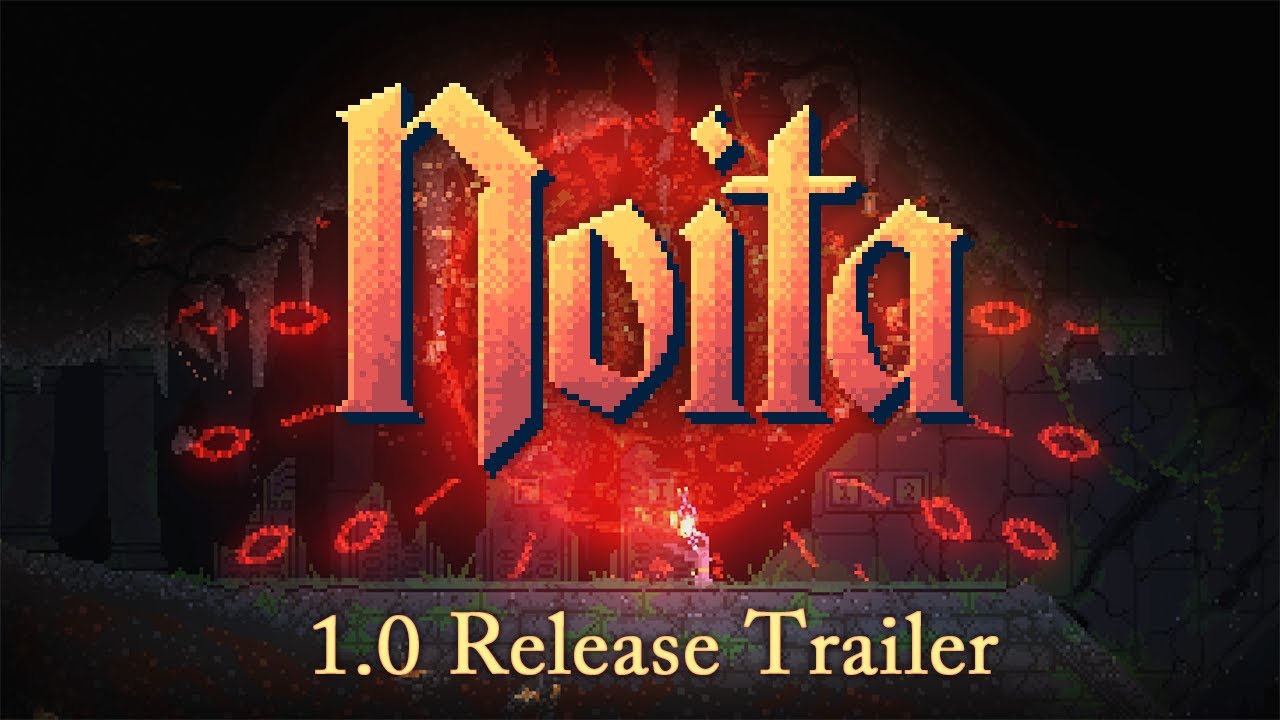 Although we have a thread here!

Noita - all the pixels simulated! Games

Did anyone mention Our Darker Purpose in this thread? I just thought about it the other day.

Someone thought it wasn’t that good:

It’s really too bad that Our Darker Purpose didn’t hew more closely to the obvious inspiration it takes from Binding of Isaac. Whereas Our Darker Purpose is a slow, often repetitive, and sometimes tedious grind to somewhere yet to be determined,...

Yeah, it’s not that great, but the Edward Gorey style is noteworthy. It could’ve been better with a bit more love from the devs and a few patches, but apparently they dropped off the map. Oh well.

I liked it a million years ago, but the difficulty spiked in the last area and I couldn’t finish it. There was some meta-progression but it got really slow. Loved the style and the story snippets though. Unfortunately it didn’t make the devs any money and they had to go back to normal jobs.

ScourgeBringer is out of EA 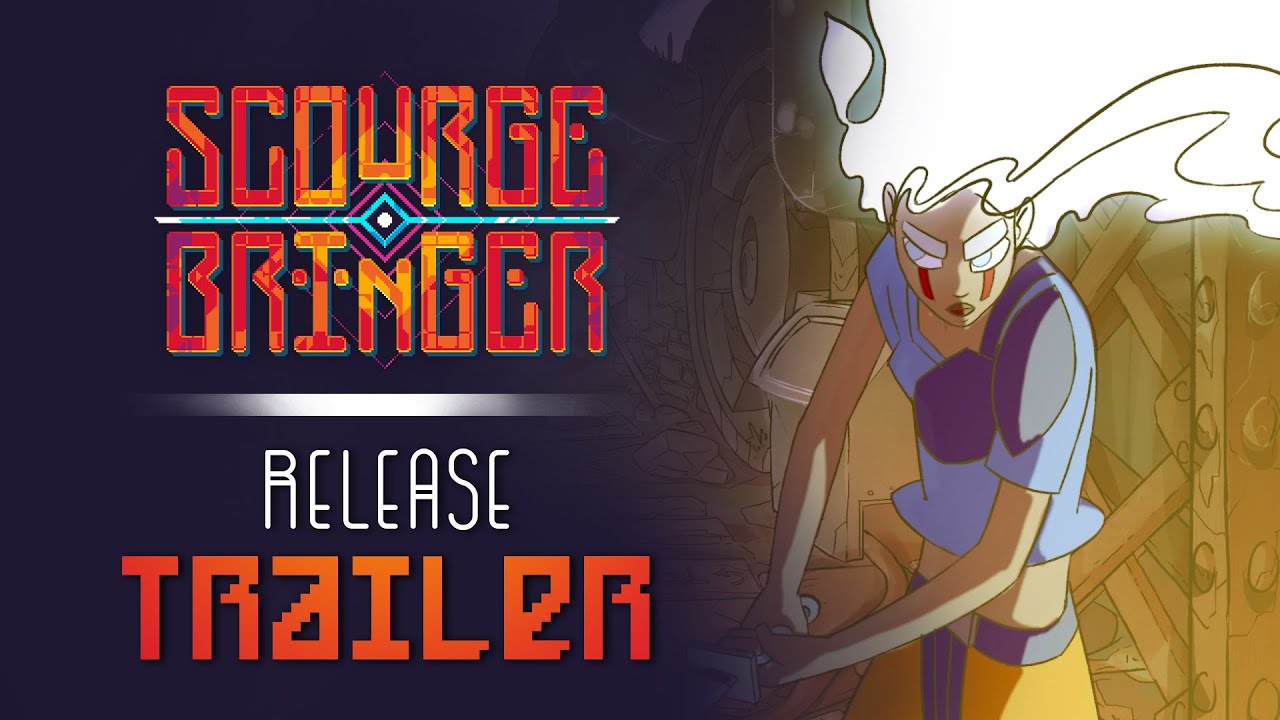 Content:
A new secret Realm with own twist and enemies: The Beyond which includes:

Secret rooms
A mysterious altar where the sacrifice your Judge Blood. What will happen?
3 different endings
13 new achievements

Ziggurat 2 is out in EA

Looks good. We’ve got some promising EA titles fitting a similar profile between this, Roboquest and Gunfire Reborn.

Ah, the first Ziggurat was pretty damn good, although I found it a bit too hard for my tastes.

I guess I got it for free somehow on Steam? Anyway, I played it this weekend and… meh.

For the first few minutes, the “time moves only when you do” concept is as awesome as it ever was. The old computer aesthetic and the nihilistic/conspiracy theory theme is really cool too.

But then… the ballet of violence gets old. I never thought I’d say that honestly. :-/ You get wave after wave in the same few stages and they get longer and longer. Plus, you never get to choose more than 2-3 perks before going back the blank slate, starting status.

Anyone who owned the first Superhot when they debuted Mind Control Delete got MCD automatically.

You might prefer the original superhot, which was more of a scenario based game with hand crafted levels that were all different, and it was in some ways more of a puzzle. You might spawn in an elevator empty handed surrounded by 3 guys with pistols, and you have to fend them off by mixing up disarming people, punches, and maybe their guns. It also had a pretty cool story line.

Mind Control Delete (which I just finished 5 minutes ago, hah) is more of a rogue-like because you gain powers and abilities as you progress through a stage, which might have you fight through 6-10 levels and gain 3-4 different powerups where you randomly choose between 2 powers you’ve unlocked at each branch point. The levels you encounter, enemy spawns, and the powers are random. The penalties you might encounter, the sorts of enemies you need to deal with (and there are some variants that are harder than the plain ol’ red guy, like armored opponents and enemies that explode when they die ) are more fixed.

All that said, I think I preferred the vanilla super hot over Mind Control Delete.

In the last days I have been playing a roguelite in EA, I, Dracula: Genesis, and it’s a pretty damn weird game.

First, it’s metaprogression heavy. It advances at a good pace for the first hours, but damn there are more than 400 ‘things’ to unlock. And it’s still in EA.That includes both things you use (weapons, perks) but also new enemies, new scenario objects like types of spikes or explosive barrels, and even unlock basic mechanics like choosing class. In fact you have to unlock individual classes, AND the ability to pick classes, AND later the ability of picking one class from three choices.

The game has a weird art style where everything looks very alien, and more to the ‘disgusting’ side of things, which may not be everyone’s cup. Just because of that, I don’t see this game ever reaching mainstream appeal. Like, the fuck is this? 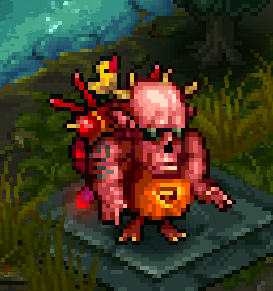 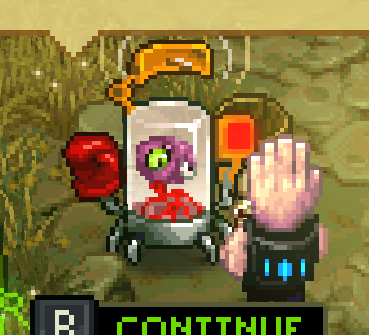 Believe me, there are very bizarre enemies and weapons in this game.

Apart from the bad tittle. “I, Dracula: Genesis”? Jesus it would better to put some generic ass roguelite title.

The game needs to improve in core action mechanics, like movement and weapon fire. The movement doesn’t seem to be designed together the rest of the game. The combat scenarios are islands surrounded by radioactive waste, some of them a fairly small, and some of the jump abilities of some characters are fairly big, so once you take a single perk that boost the jump, you have situations where a simple jump will get you out of the island and getting hurt. And the character is very uncontrollable while jumping. In general the movement is a bit floaty which given you have to avoid enemy fire, and spikes, turrets, and more, it doesn’t feel good enough. The weapon fire issue comes from a lack of nice weapon feel, a combination of slow projectiles, lack of impact on enemies, etc.

So what the game has on the good side? Well, it’s subjective this is ‘good’ but the game has a kitchen sink approach to design that I find at least interesting . Let’s see, while you play, the game has:

Weapons:
1 sidearm with infinite ammo
Up to 4 mores standard weapons
1 special weapon, which recharges upon use of normal weapons
every weapon can have a random attribute modifier and weapon mods, some of them change the weapon a lot.
1 consumable item slot
1 special relic slot, and another one which I don’t even know what is for lol
2 skill scroll slots, which have a mana cost and/or cooldown.

Weapon have their own ammo (game drops only ammo for your weapons), and some have to be reloaded. You have health, mana, max health and max mana of course, radiation which decreases you max health, energy for the special weapon, speed, jump distance and height, and there are some more misc stats, because I found perks which would increase my ‘luck’, range , jump cooldown, etc.

There is a big list of passive item/perks/relics. There are four inventory slots (helmet, boots, armor, backpack) which to be honest I still haven’t even unlocked.

When you start the game, you have to choose character: 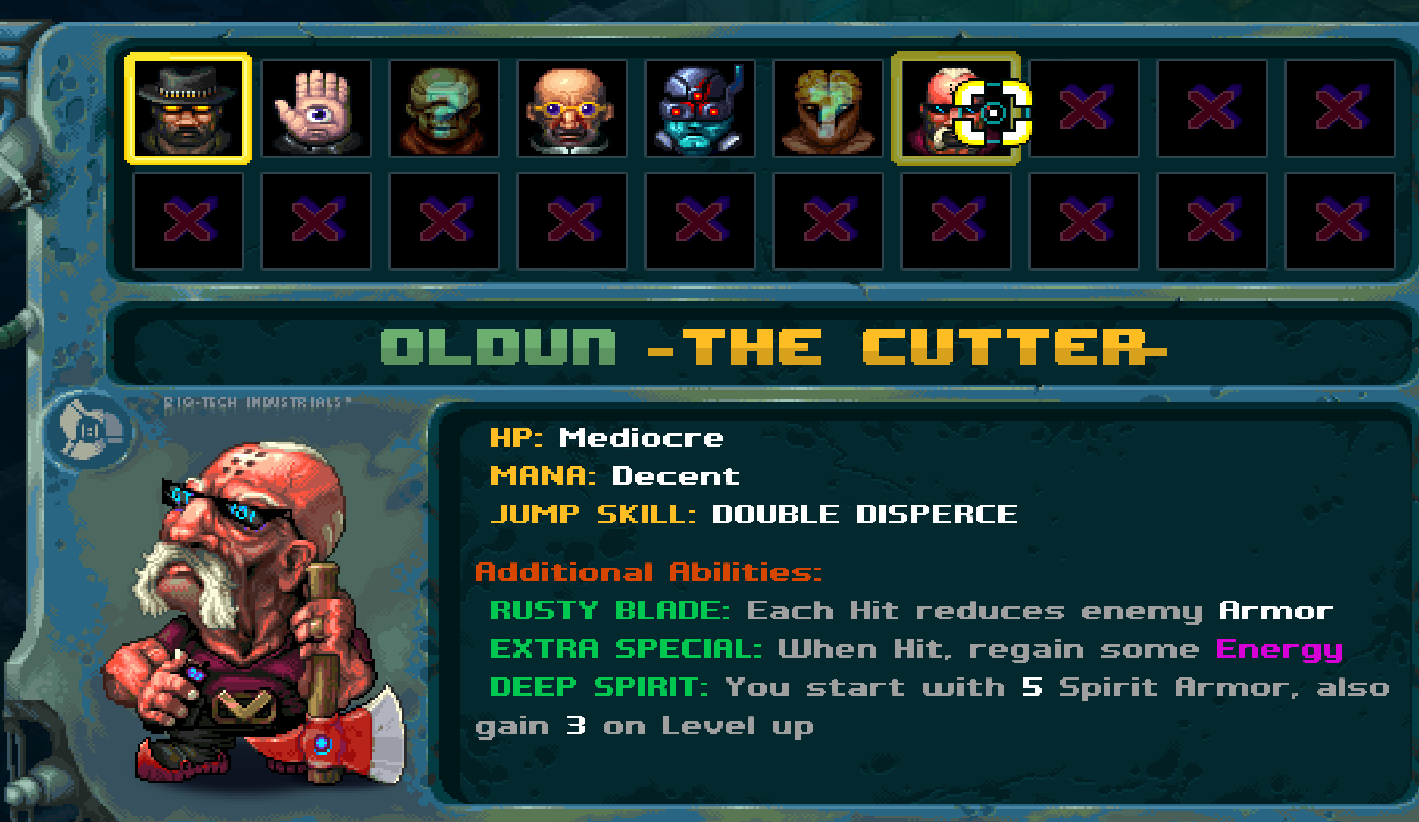 world/rift, from four choices each one more difficulty with different parameters like extra anomalies 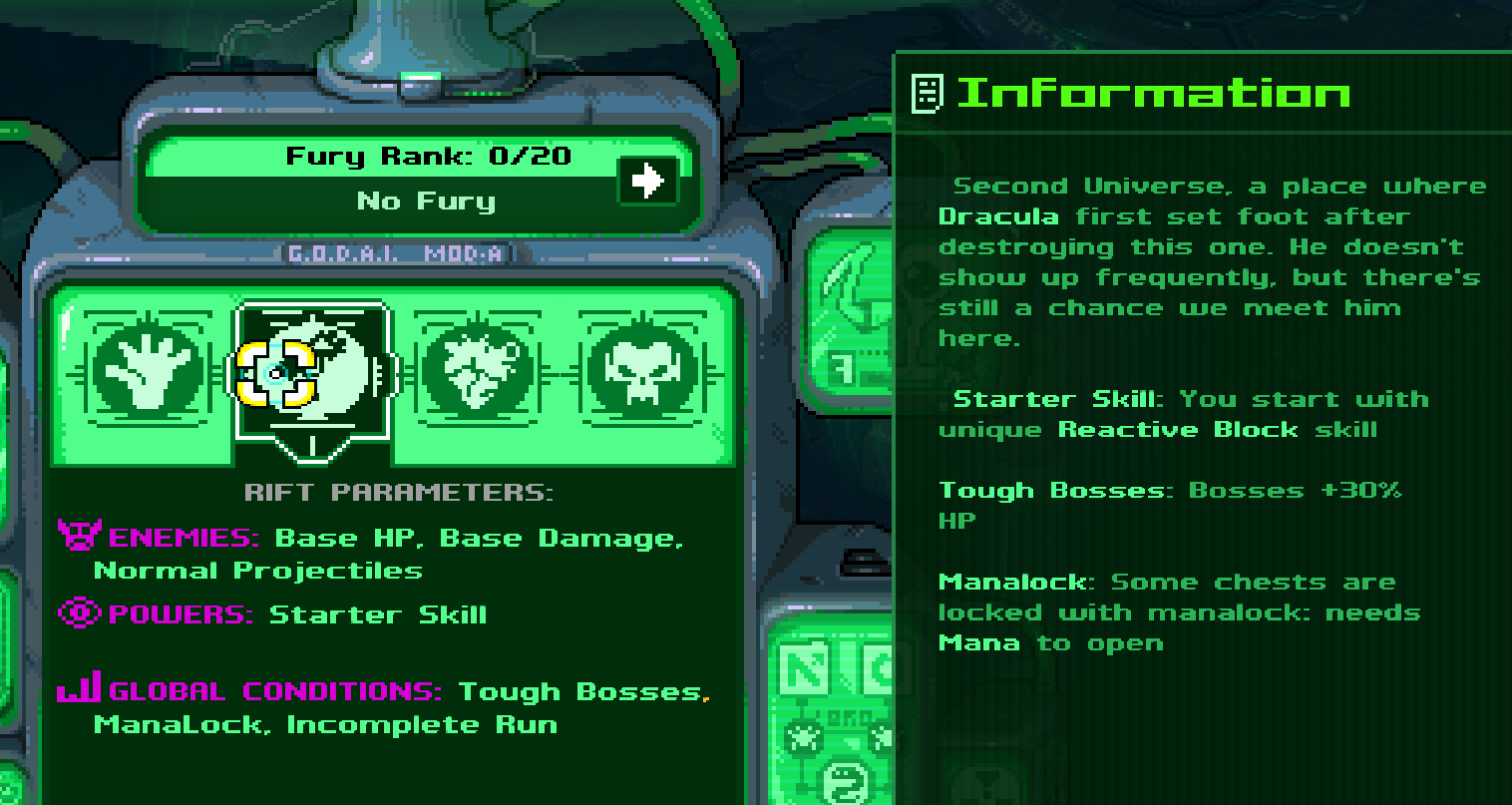 fury level which is something new, it seems to be like Ascension levels from StS 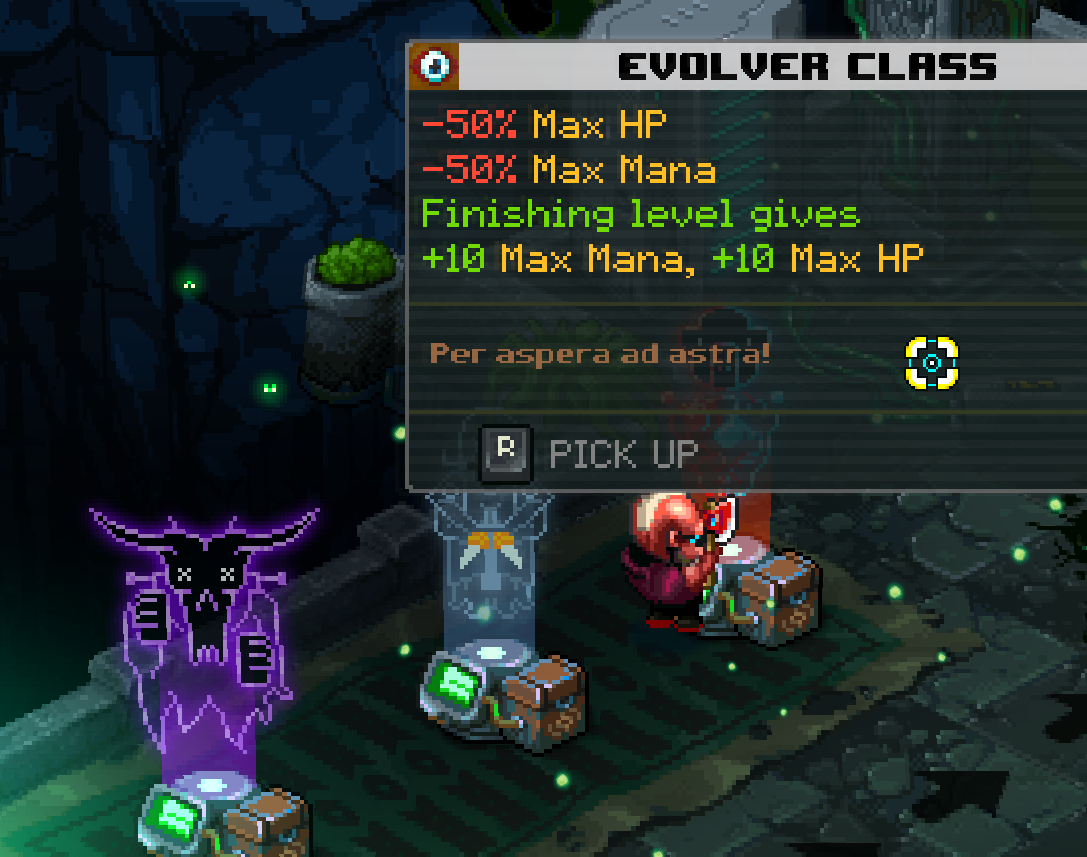 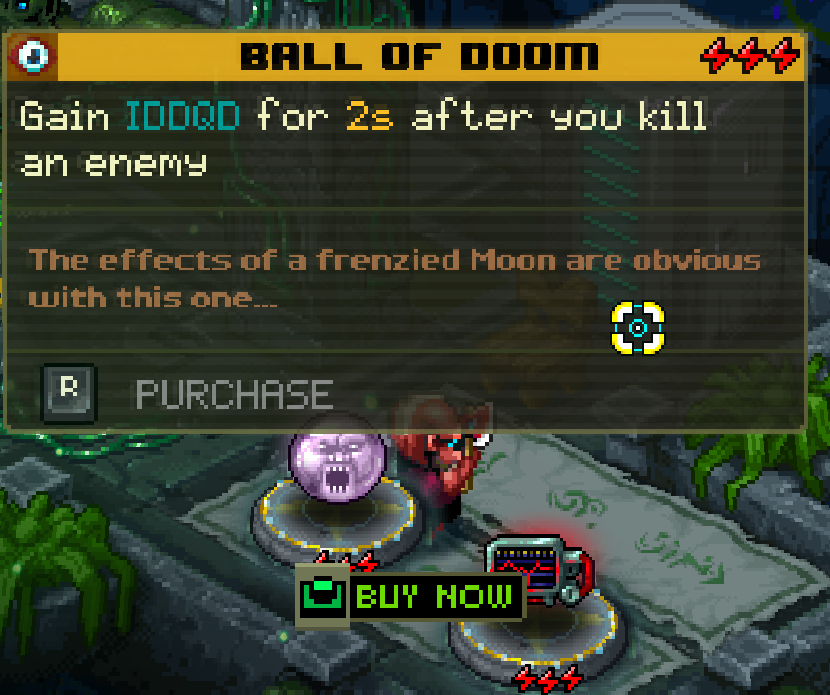 And in the game, as the 400+ progress indicates, there are a ton of stuff. Just in the world I found several types of boxes, each one opens up in a different way. You have wooden boxes, metal boxes (explosives), special boxes (energy), mana boxes (drain mana) and spiked boxes (drain health).
There are a big variety in elements found in the islands, like gravity fields, spikes, hidden mines, explosive or radioactive barrels, energy fields, enemy dispensers, turrets of different types, teleporters, jump pads, phase teleporters that make you immaterial, bouncy mushroom fields, fire grates, etc.
There are usable items, health dispenses, generator boxes, machines to reroll hp or mana, status of different gods to pray (different gods have different effects of course), shops, temples with fps minigames, commstations which trigger special fghts, time challenges, spike challenges, terminals with hacking minigames, curses, there are a dozen of different trader npcs (soldiers, priests, traders, aliens, robots, dinosaurs, lost souls, madmen, etc) each one with a different set of 3 options. There are anomalies sometimes, that are gameplay mutators which just apply to the current island.
And of course there is a fuckton onf enemies, weapons, weapon mods and perks.

The game does a pair of small things I really like: you can recycle any weapon, item or even unused npc-trader, and you recieve something in return, some coins, but in case of weapons usually some ammo too or even new perks. So when you swap special weapons and drop one one the ground or the options of a npc don’t convince you, you always can recycle them instead of leaving it there.
Another thing I liked is how you unlock most of this stuff. The game is metaprogression heavy as explained, but at least they do it in a special, showy way. The first time you find a perk, consumable or weapon, it appears with a lock. You have to “use” it, which teleports you in an arena where you receive that item and have to clear the arena to unlock it permanently and receive it in the current run. It’s a nice way to have a fight separate from the rest of the game where you can try the new thing and see clearly their effects.

Nice post! It does seem like one heck of a kitchen sink game! I’m surprised they couldn’t fit a “2000” at the end of the title.

Hmm… funnily enough, the weird/gross art style reminds me of another roguelite, something a bit more like Binding of Isaac, where your character gets all kinds of gross mutations. I can’t remember the name.

EDIT: Damn, can’t find it, but this looks weird enough in its own right:

I saw this last night and was mesmerised by the visuals. Some of the best pixel art I’ve seen in a while.