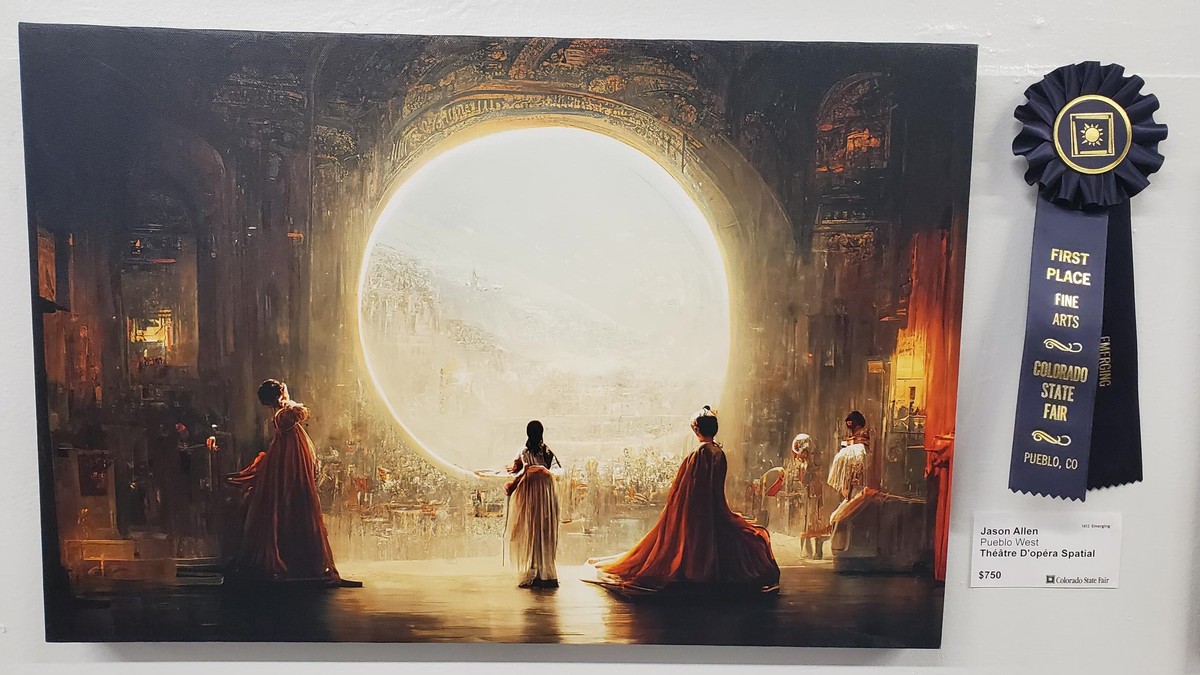 This news makes me feel as though our eventual AI-controlled society might be more Culture and less Terminator.

Once we put them in charge of the kill-bot factory, we will see which way it goes.

I’m gonna author an RPG module and use AI art in it. In fact, some of the art will drive the details of the writing rather than the other way around (the way Lord Dunsany sometimes wrote from the art of Sidney Sime). I love the unexpected stuff that the AIs sometimes put in.

A major OSR blogger posted a sort of hand-wringing thing about whether it’s OK to allow people to use AI art in their indie projects instead of having them pay artists (who are always screwed over, etc. etc.). I’m not sure what he means by “allow” — not boycott, I guess. But I’m gonna give my module away for free, and playing with prompts to generate AI art is fun and engaging, and I ain’t no artist employment agency in the first place, so fuck it.

I saw the headline a few days ago - my gut instinct without reading anything is to say you can profit/win awards from your AI generated art IF you are the one that created the AI.

I saw that article yesterday and then messed around with Midjourney. It is really addictive messing with the prompts and seeing what comes out.

How do copyright laws apply? Could you theoretically make video game art assets with AI and claim them as your own?

The Midjourney license allows you to use generated artwork commercially.

@John_Many_Jars Jon Hodgson, the artist that illustrated the first edition of the One Ring and a lot of other things, just ran a Kickstarter for an RPG book completely illustrated by Midjourney. Raised 22k. That man is an artist himself. So I see no problem with it at all. I have spent all day learning the ropes of MJ for my tiny Sci-Fi RPG, and it is a pain. I would love to pay an artist so I do not have to figure this out, alas I can’t afford one. So MJ it is. As it is MJ will not replace a real artist any time soon for people that can afford one. People share their random and lucky beautiful generated stuff mostly and not all of the failures and iterations. It is nearly impossible to get visually and artistically consistent results from MJ. At some point in the future maybe.

It’s going to get complex. These things are trained (sometimes quite recognizably so) through copyrighted images. So their output can include images derived from stuff that is protected.

So even if Midjourney permits commercial use, at some point some artist that recognizes his/her work on an AI generated image used commercially is going to sue for copyright infringement. And I have no idea how that will shake out.

As far as I understand it, tool makers don’t have to allow anything (in the US) wrt to copyright, as their output is purely automated. But, as nothing is simple in this world, there’s where clarity ends - it could still violate copyright of source images or whatever the tool’s license is, which is where the explicit allowance might be important - although they probably have no actual copyrighted work as input.
IANAL, and that took a fair bit of effort to write as precise as possible. I may not get why people don’t get the simpler points of the law, but, oh boy, I don’t think anyone would risk creating anything if they tried to understand how everything interacts. 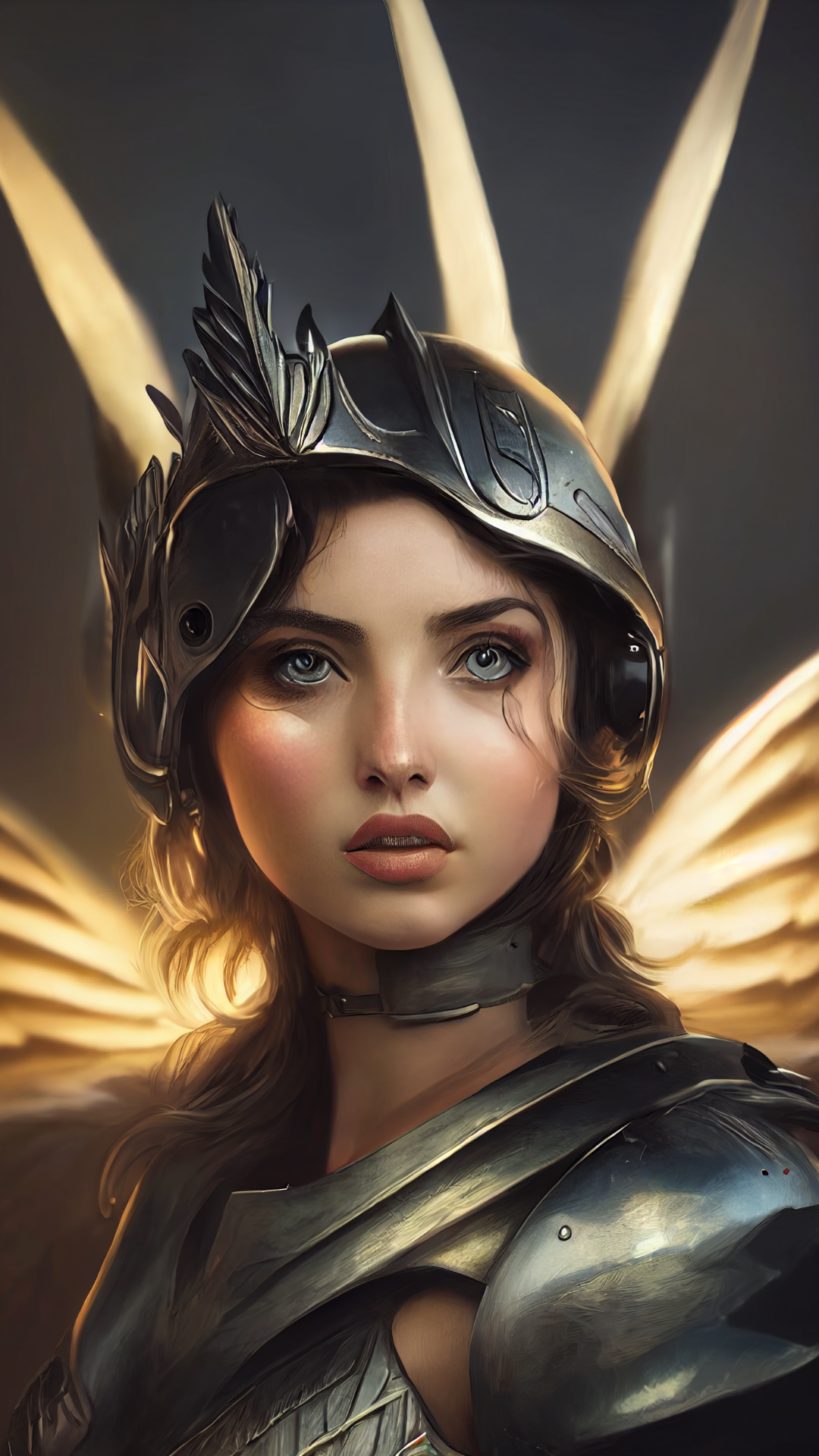 Fixed up the face with GFPGAN: 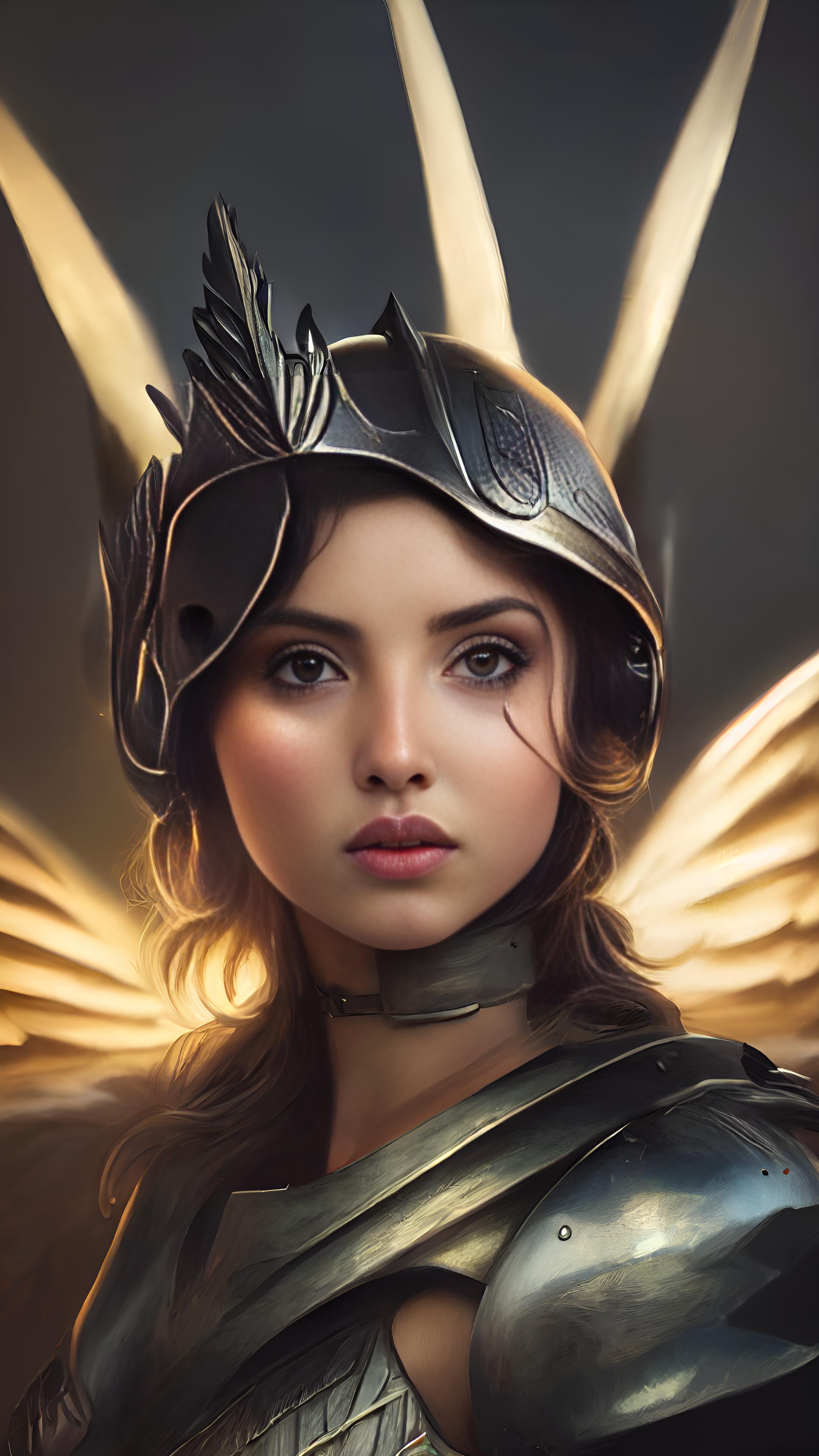 A major OSR blogger posted a sort of hand-wringing thing about whether it’s OK to allow people to use AI art in their indie projects instead of having them pay artists (who are always screwed over, etc. etc.).

Funny you should bring all this in. I’ve just finished listening to the audiobooks of “Designers & Dragons”, a history of the RPG industry (3 volumes on Audible, the '70s, '80s, and '90s- '00s isn’t out on audio). One trend you see throughout is the amount of companies that crashed, failing to pay freelance artists and writers for their last few books- so your poster is absolutely correct. Now, I’m not sure the answer is ‘replace those freelancers with computers you don’t have to pay’, but at least those artists aren’t wasting their time on projects they aren’t paid for.

I’m of a few minds on the subject. I’m a chef- a creative industry. However, I categorically refuse the framing of the ‘genius’ chef, who comes up with amazing ‘new’ things. Every chef alive today is standing on the shoulders of centuries of knowledge, creativity and invention of chefs who have come before- you are nothing without them, whatever small insights you think you’ve brought to the table.

Similarly, every visual artist is working with the inspiration of every image they’ve ever seen. These tools are just supercharging that ability, and as ImaTarget pointed out, these tools are hard to use. It somewhat reminds me of the debates back in high school in the '80s- I was into synth/new wave, and my rock/Metal friends would deride my music as ‘not real’ since it wasn’t made with an ‘insturment’. No, it’s made with a tool that can literally produce any sound, provided you can figure out how to make it do so…

So, hey, following all that rant, I’ve considered something like you and Ima. I’ve got this boardgame project on the backburner for the last decade. I’m thinking of turning it into an ongoing zine thing during Zinequest next year, start with a single issue and expand it with regular issues, and with the advent of this AI art stuff and my vague design skills I think I could put together a cool feeling project.

these tools are hard to use

Are they? That’s not my experience at all.

This is “robot playing a fiddle” that I requested and got back in a few seconds with Midjourney. No editing. 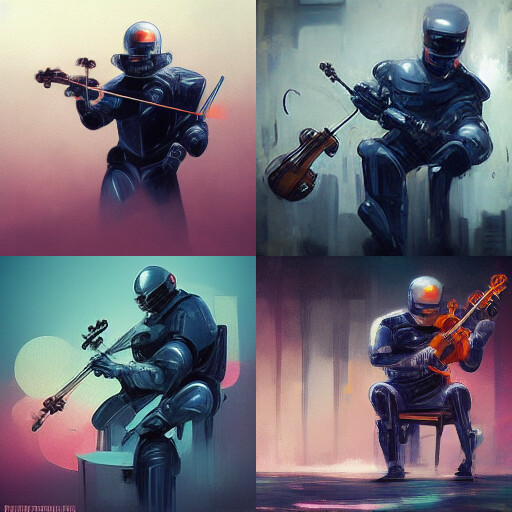 Is it the best art ever? Probably not, but I’d say it’s totally worth using in an RPG rulebook or some other sci-fi project. It’s a darn sight better than the art I see in many of my older RPG books.

I guess I’d consider that the equivalent of hitting one of the basic rhythm buttons on an old Casio keyboard. Yeah, you can do it, and even build a song on top of it if you know what you’re doing- heh, Nick Cave did that exact thing once, now I think about it. You can have that one piece of art, or even a dozen. But it takes work to make them all fit together into a coherent whole.

ai is great to the initial steps of ideation on my mods, but has they progress, they it get less usefull.

like, currently, I am trying to use aiart to generate scary ghost, and nothing I produce is interesting the way I want it to be

It’s going to get complex. These things are trained (sometimes quite recognizably so) through copyrighted images. So their output can include images derived from stuff that is protected.

I don’t think it works like that, it isn’t like is doing a collage of copyrighted material. It really ‘learns’ to paint (well, to put colored pixels on a grid) by looking at millions of paintings.

I’m not concerned in how it works, but in how the law works.

A derivative product of a copyrighted work can’t be used commercially. There’s a chance these networks are going to output something that will be close enough to the original (not the whole painting, but a figure in it or something) that there will be at least a viable claim.

Discerning the original and whether it’s been enough transformation is going to be a subjective task for the judge. I do imagine at some point there will be the need for clear legislation. As the law is written right now, most of these projects are using copyrighted images for training and that opens up a huge can of liability worms.

Sorry mate, but these are bad. I would never put anything like it in any of my products. There is hardly a robot there, and the fiddle is… well. If your barrier to what is “good” is that low, sure, it’s easy.
It took me hours and many reiterations on prompts and results to get these. I checked, and it took like 40 tries to get these 3. They are for a Star Wars TTRPG group, not the game I am writing. 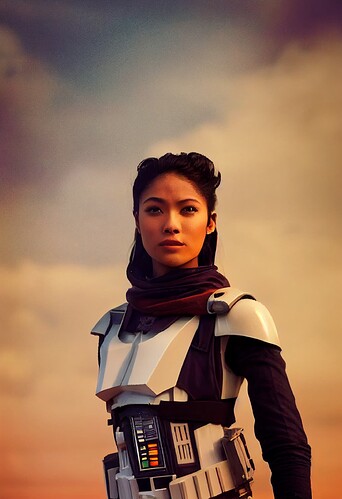 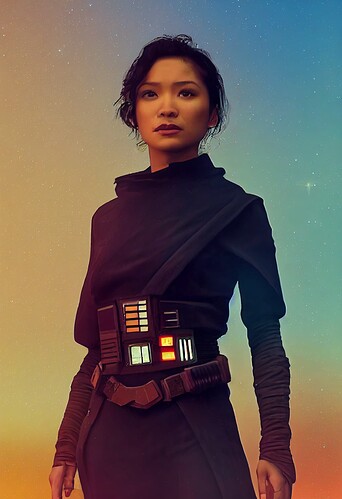 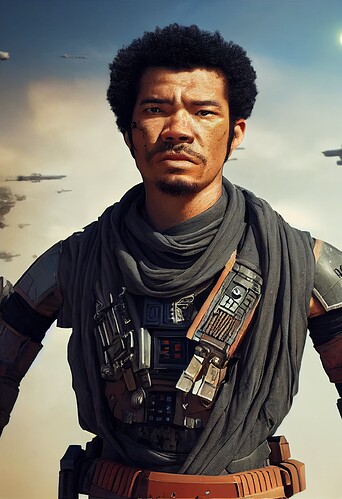 What I’m saying it, it isn’t by nature derivative, not anymore than when we humans are babies and learn how the world looks around us, and later observe and are influenced by other art.

It is an interesting dilemma. Let’s say Midjourney outputs an image that looks, for example, incredibly similar to Spiderman. Can Marvel sue if you use it commercially, even if it’s a purely by-chance output ?

Well, it can do a Spiderman without being ‘by chance’, but because an user put the prompt ‘Spiderman doing a heroic pose’. In that sense, yes you can be sued.