So I tried to find an aintitcool thread, but nothing relevant for the last decade, just like the site itself. I haven’t gone there in ages. There have been a ton of issues with Harry Knowles in the past (his rip-off Kickstarter; his infantile writing; his being in the pocket of whatever studio/director pampers him), but this is different.

Indiewire reporter last week that a woman had come forward and accused Harry of sexually assaulting her in the Alamo Drafthouse 17 years ago. Now, that seems like a long time to wait, but there’s some recent history that is why this is coming up now. But, even then, 17 years does seem like a tough case to prove.

But Quint, who has been there forever, just openly quit the site over this. A number of other writers are also leaving.

Is this the end of Aintitcool? I can’t imagine they have a ton of major advertisers left, but this is the kind of thing that makes a site radioactive.

Eric Vespe, known as “Quint” on Ain’t It Cool News, announced Monday that he is stepping down from the site amid a sexual assault controversy. On Saturday, IndieWire reported that…

A warning: BLADE 2 is an R-rated movie. This is the NC-17 Review of it. You have been warned. For me to review BLADE 2, it is a major conflict of interest, because Guillermo Del Toro and I are brothers. His father says so. His wife...

(this was linked from the comments to the above article, by the way)

But Quint, who has been there forever, just openly quit the site over this.

That’s the only crazy part of this news.

I thought this was one of those ten year thread resurrections, since I haven’t heard about this website for about that long. But no, it’s a new thread, and they’re still around? Wow.

Yeah, wow. Today I learned that AICN still exists. This is a blast from the past - I remember it being my first stop for all new horror releases and rumors. Star Wars prequel info too, I remember constantly looking for screening reviews before release.

And yeah, as shitty as this new info about Knowles is, I can’t say I’m surprised. Dude always seemed skeevy, guess I just set all that aside as a kind of tax to be paid for access to inside information.

What a weird coincidence. “Quint” was just on the Doug Loves Movies podcast last week, giving me my “Ain’t it Cool News is still a thing?” moment.

It’s not looking good for AICN.

There’s a whole moment happening right now with film-geek-bro-culture and sexual harassment at and around indie movie theater chains. A couple blocks from where I live, the Cinefamily – an L.A. arthouse theater where I saw, among other things, a lovely print of Orson Welles’s magnificent “Chimes at Midnight” – has been shuttered by the owners in the wake of numerous sexual harassment charges made against its manager by various female volunteers.

Then there’s been a whole thing with film blogger Devin Faraci, who after allegations was given a second chance to write copy by Alamo Drafthouse honcho Tim League. There was a big backlash so League dumped him. And now the Harry Knowles allegations.

I’m gonna admit that I’ve always had a soft spot for AICN. Centuries ago I passed a script to Harry via my brother who was passing through Austin. I even have enjoyed some of his reviews, which are rambling and grammatically awful but occasionally hit upon a sort of geeky/gross mot juste.

If Harry Knowles groped women without their consent then that is a far, far worse thing than writing a gross and shock-jocky review of Blade II. His having written such a review (or the Wrong Turn one, or the fantasy about the cheerleader in Heroes) does not mean that he definitely groped anyone.

We’re back to the same old problem. How do you respect the voices of victims of assault while at the same time hewing to the presumption of innocence, and not cavalierly destroying a person’s reputation? The current rule of thumb seems to be that if enough people come forward (a la Cosby), it’s OK to pass judgment without due process. I’m not sure what number here amounts to ‘enough.’ And, of course, the court of public opinion and courts of law are two very different things; but still, in many cases we are talking about the total annihilation of a person’s livelihood, so it’s not trivial.

Anyway, it’s a shitshow and quite depressing.

Well we can all agree he should be kicked out of college!

Here’s a fun blast from the past, by the way.

Wow until this thread, I had completely erased AICN from my mind. It’s like someone just opened a time capsule from 15 years ago.

It’s not quite as old as your Avatar. :) 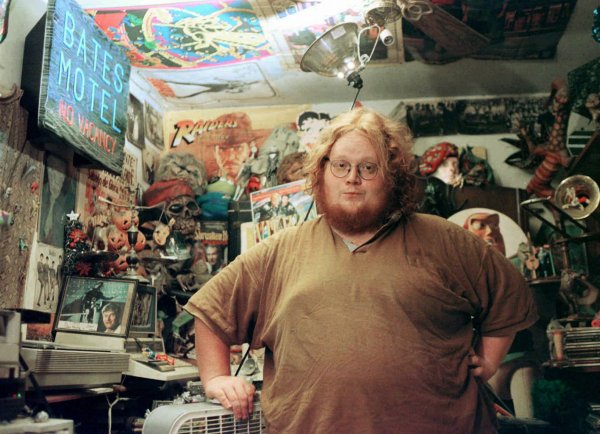 In the wake of allegations against the Ain’t It Cool News founder, more women have stepped forward with stories about their experiences.

Harry Knowles, the movie blogger who founded Ain’t It Cool News, is taking a leave of absence from the popular fan site after being accused of sexually assaulting a number of women. Knowles a…

There are accusations that the “sister” is in fact Harry just writing under another name.

/Film's Statement on the Alamo Drafthouse, Harry Knowles, and Harassment in the...

Over the past few weeks, a number of allegations have rocked the film community in Austin and Los Angeles, and by extension, the online film community as a whole. The /Film staff has been closely following these developments both from afar and on the...

So, first there was Cinefamily. Then Devin Faraci and by association Tim League/Alamo Drafthouse. Then Harry Knowles.

Meanwhile, in ‘real’ Hollywood (as opposed to film-geek-bro-land), Harvey Weinstein is now in the shit.

Speaking as a big white guy who has no idea what he’s taking about, I see a difference between sexual harassment and sexual assault. A huge difference.

Sexual harassment is when you use a position of authority to intimidate someone into talking about sex, using innuedoa, etc. Its also harassment if you repeatedly make unwelcome advances to a colleague. There is a very wide litmus test for this and its complicated, but my rule of thumb is if you are making their work environment uncomfortable, you are guilty. This is a fireable offense and also reason to have people drop contracts, speak ill of you, or sue you in civil court.

Sexual assault is much different and requires either physical intimidation, unwanted touching, exposing yourself, or in the worst case actual assault. It can also be when one person hasn’t or can’t give consent. That’s when you get arrested and go through the criminal court system.

One can certainly lead to the other, especially unchecked. But they are different.

By the way, President Trump has been accused of both, and is on the record saying he commits sexual assault. The President having been accused of this repeatedly and facing no consequences is appaling and will certainly lead to extra brazeness in the general public. Just a final depressing thought.