It’s November, and I’ve read my first book! (OK, it was actually mostly read in October.)

The Just City by Jo Walton is a sort of sci-fi/fantasy mashup where the gods are real and make use of time travel to establish an experimental version of Plato’s Republic. Yep, that’s kinda weird, but she makes it work, in my opinion. I liked all the main characters, and thought the tension built around trying to implement a thought experiment in real life worked well. More thoughts here. It’s part of a trilogy, which I intend to finish out - later this month, I hope.

I’ve been mostly tied to the news on my commutes recently, so I haven’t had much time for reading.

However, I did breeze through a short novella in the “Expanse” universe from “James S.A. Corey”:

The Churn: An Expanse Novella (The Expanse)

This is the past Amos Burton tried to leave behind. Set in the hard-scrabble solar system of The Expanse, this novella takes the bestselling scifi series to the slums of Baltimore and into a dark worl ...

It was very quick and fairly well-written, and provides some fun background info on one of the main characters in the Expanse books. The audiobook was like two and a half hours long - good for an afternoon of raking leaves.

Reading Zoo City by Lauren Beukes. South African urban fantasy noir. Seed concept is that in 2006 or so criminals and other underclass people started being encumbered with animal familiars who give them minor magic powers. So they get ostracized and wind up living in ghettos.

Very good so far. William Gibson doesn’t spread his blurbs around casually, but he blurbed this one.

Terms of Enlistment, Lines of Departure and Angles of Attack, by Mark Kloos.

Despite the cheap looking covers that smack of self-published fantasy fulfilment, these were actually pretty good. Space marines, go fighting aliens and other people, sort of thing.

I’ve used it on android. I add books from the website and they just show up in my collection like any other purchase. The selection is incredibly shallow, though, and obviously intended to get you hooked on a series by offering the first book free. Likely intended to up sell Kindle Unlimited.

Yeah I enjoyed those recently, not top quality literature but they were a good popcorn read when needed. In fact I seem to find it more difficult to find the Summer blockbuster style books to read these days, either they are very poorly written, staid and lack any pop or fizz or they don’t seem to be out there.

I seem incapable of reading one book straight through in my old age. So, currently I’m bouncing among:

I’m reading The Bat by Nesbo. It’s pretty good. I like it so far.

Just finished the 3 (current) books of Paul Cornell’s Shadow Police series. They are very good urban fantasies set in London. Interestingly enough, I picked them up at the recommendation of Charles Stross at a book signing.

I’m also reading an urban fantasy–Magic Burns, the second in the Kate Daniels series. They’re set in an alternate Atlanta, with vampires, shapeshifters, and Kate making her way with her wit and giant sword. Fun stuff.

When did the third one come out? Damnit, I need to read that immediately.

For my own part, I’ve been interspersing stories out of Laird Barron’s Imago Sequence collection (which are good but I can’t really take more than one in a row) with various urban fantasy type things. For example, the latest October Daye book by Seanan McGuire, which was enjoyable but felt kind of toothless. At this point Toby’s nearly indestructible and I wasn’t really able to seriously envision her closest loved ones being in serious danger of death either, and the villain’s plot didn’t seem quite as momentous as in recent entries. But hey, I still like the characters and setting a lot.

Also, Lila Bowen’s Wake of Vultures, a weird west tale of a young half-black, half-native child raised by a pair of pretty awful human beings who inadvertently kills a strange man who attempts to attack her one night and finds that she can now see monsters (and the monsters don’t like that). She gets hired on as a cowboy due to her skills with horses and uncomplaining attitude but as she runs afoul of more monsters, it becomes clear her destiny lies as a monster hunter. And so it goes. Very vivid writing and an unusual take on the formula (plus the mix of monsters and western is less common than the modern day variety).

And the first couple of books of Chuck Wendig’s YA Heartland trilogy before I realized I’d failed to load the third book onto my Kindle (fixed now but I’ll have to circle back around to it). Some of Wendig’s usual tropes about cranky misanthropes and a world that rather drives that sort of personality, but the setting’s a fairly original take on the YA dystopia, with an oppressed underclass living in monitored, poor communities processing an aggressive and incredibly prolific genetically engineered breed of corn that covers much of the surface in order to supply the resulting materials to an overclass living in sky cities, the Empyrean. The corn causes horrible pollen storms, has pretty much killed other agriculture, is basically inedible and has toxins that cause all sorts of mutations and internal damage over enough time and exposure. And processing it is very dangerous as well. And then there’s the Blight, where your body starts being taken over by a semi-sentient plant…

Finally, there’s Mira Grant’s Newsflesh series. I picked up Feed some time ago because it was getting a lot of praise and I bounced off it hard. The opening scene felt like some sort of ridiculous extreme sports thing to me and the concept of bloggers as this dominant societal force was hard to take seriously. But later I discovered Mira Grant was a pen name of Seanan McGuire and since I’ve really enjoyed her other stuff I went ahead and queued it for another go, which I am finally getting around to. This time it stuck. Oh, I still find the blogger conceit a bit tough to take seriously, but I am willing to roll with it, and I dig the characters and all the little extrapolated details of the series’ particular take on zombies. And there’s a really chilling moment late in the book that I did not expect the narrative to have the guts to follow through with. Well, it did. And how. Now working on Deadline.

I’m reading The Bat by Nesbo. It’s pretty good. I like it so far.

Good series, the 4th is on my TBR pile.

I just finished Neal Asher’s Dark Intelligence, Book 1 of his transformation series. It is a great read that focuses on a number of characters in his Polity universe, taking place after the events in the agent cormac series. 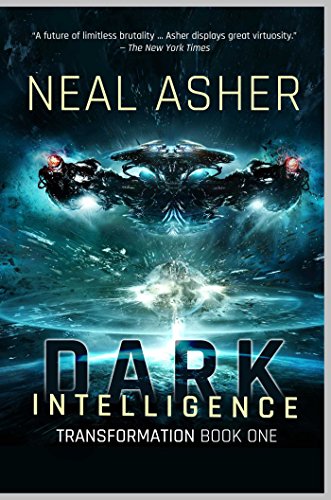 One man will transcend death to seek vengeance. One woman will transform herself to gain power. And no one will emerge unscathed... Thorvald Spear wakes in a hospital to find he's been brought back fr ...

For some reason, I thought this was a two-book series and was about to buy the 2nd book in the series, when I found out there is a 3rd planned for March. Thus, I think I’m going to hold off for now on the 2nd book and go to another book in my queue

I really liked the first book in the laundry series, so looking forward to this.

I really liked the first book in the laundry series, so looking forward to this.

Jennifer Morgue is probably my favorite in the serirs. The characters become, well, characters. The format and how it connects to the plot is just great.

I’ve been terribly busy with lot of things the past six weeks so little time for reading. I’ve now read the last 2/3s of Left Hand of Darkness. Terrific, truly a classic.

I play way too much Star Realms, so when they put out a novel set in the game’s universe I felt the need to give it a try. Rescue Run is the first novel by Jon Del Arroz, and it’s not bad for a first effort. Wrote a few paragraphs about it on Goodreads. Short version: The overall story arc and themes were a bit too generic for my taste, but the writing is well executed. Certainly if you’re interested in delving into the Star Realms universe, it’s worth the read.

Just got through Peter F. Hamilton’s most recent Commonwealth book: 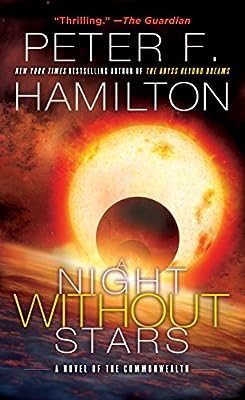 A Night Without Stars: A Novel of the Commonwealth (Commonwealth: Chronicle of the Fallers)

I enjoyed it a lot. The Commonwealth books are about a super-advanced human empire on the cusp of ascending/singularity/whatever, but this one focuses on a marooned world with a (justifiably) repressive government at about the 1960s level of technology and their fight against an alien menace with some Red-scare echoes. Along comes a super-advanced human from the Commonwealth who may or may not be able to save them all.

In most of his books, Hamilton is a font of cool sci-fi ideas. This book has a sizable section where he just throws new, fairly unique worlds at the reader every tenor twenty pages… but unlike, say, the “Night’s Dawn” series, these ideas are fairly compartmentalized and actually make sense in context.

Hamilton’s characters are not usually his strongest point, but most of the (many) protagonists and antagonists in this book were decent. Except the women… as far as I can tell he only has two templates for girls.

I wrote about this elsewhere, but I cannot get enough of The Traitor Cycle book 1, The Red Knight. The world is exciting, fairly high in magic and rich in lore, but seemingly some variant of Earth in many ways. The writing is crisp, fast paced, and the action is well realized. Great characters, incredible moments, it’s magical. It’s sort of like reading the Malazan books but not feeling confused or left behind every chapter. 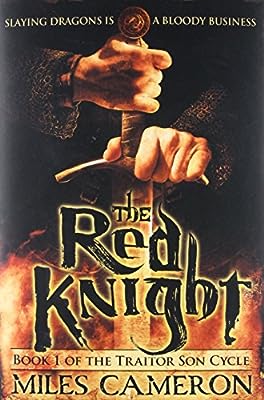 I don’t believe this is much of a spoiler, but if you are on the fence I grabbed a few pages from one of the chapters, probably about a third of the way into the book, where some solid action is taking place.

I just finished Escape Clause by John Sandford. It’s a Vigil Flowers mystery and I’ve come to enjoy those a little more then the Lucas Davenport series.

Except for this one.

The plot is a couple of tigers from a zoo are stolen. I didn’t really think the plot picked up, and the secondary plot involving Frankie’s sister never got off the ground.

I just finished Escape Clause by John Sandford. It’s a Vigil Flowers mystery and I’ve come to enjoy those a little more then the Lucas Davenport series.

Except for this one.

The plot is a couple of tigers from a zoo are stolen. I didn’t really think the plot picked up, and the secondary plot involving Frankie’s sister never got off the ground.

That’s a shame, I have this one back logged for a rainy day and agree that they have been better than the davenport ones recently.