Turret/drone is the current OP meta. Firestarter with the new Eclipse Protocol set is grossly OP too, super fun lighting groups on fire for massive damage.

I really enjoy the game on Hard, and sometimes on Challenging depending on activity/mission. Anything higher and it feels awful and unfun to me with bulletsponges that kill you in .25 seconds.

I stepped up to Heroic 3 weeks ago and now find it easy without major gear upgrades. The vast majority of player population seems to be at this level and matchmaking is instant compared to Challenging/Hard/Normal making someone leveling up a lonely experience unless they use “Call for Backup”

DARPA, Zoo invaded and the Liberty Island mission (with its invincible Keener bug) are the only heroics I haven’t finished successfully.

Since I’ve reached WT5 and am collecting ‘max’ level gear at this point (I know I could go higher if I picked up the expansion, but I don’t really want to get into that right now) I’m starting to wonder what folks like for gear. I’ve started collecting a bunch of gear sets but interestingly enough, those don’t seem to be the obvious choice that they were in the first game. They look pretty good, but don’t appear to have huge advantages over normal high level gold gear.

That said, I do have a few that look interesting. Since I’m playing with a survivalist build, I kind of like the look of Tip of the Spear gear, since it looks like it supports that specialization. But it doesn’t have the strong armor of, for instance, a Gila set that I tend to utilize now. Though I could still stick a couple of those since I only need 4 pieces of a gear set for the full benefit. Just curious what any of you may have found that works for you?

I’ve been at max level for quite some time and maxxed WONY pretty quickly. I only play solo and coop with one regular coop partner. For me, at this point, developing new builds is the only draw to keep me in the game, everything else feels very BTDT.

I had a very nice crit red build that I enjoyed a lot, and there’s a new armor set that seems to work well with that. I tried a Negotiator’s Dilemma build that was interesting but didn’t work as well for me as others have found it to be.

I then developed a Hard Wired skill build, with a specific set of talents and gear, with a sniper turret and cluster seekers. Basically I could throw out clusters that did a LOT of damage, immediately put up the sniper turret which also did huge damage, and as soon as I put up the sniper turret it refreshed my clusters and I could immediately toss those again. A skill kill also had a 25% chance of refreshing the other skill. I could go through missions at Challenging solo with that build and just blow through the ones I was really familiar with. I played the world at Challenging and CPs at Heroic. (I could play the world at Heroic but for me it became a bit tedious in that I couldn’t go from point to point without non stop bad guys in the way.)

I’m now playing a HW build, full Tier 6 (using the technician specialist for the 6th tier) using the assault turret and assault drone, and it is pretty crazy in terms of damage dealt.

There’s a new build I want to try now, mentioned up thread, Firestarter with the new Eclipse Protocol gear. Looking at Youtube videos for optimized builds. I do miss the power of a red build, but for solo and coop these skill builds are pretty awesome. My coop partner and I replayed Roosevelt Island at Challenging recently. The first time we played that mission, at Hard, we were just overwhelmed. We went over the wall over and over and over and would get slaughtered, overrun, it seemed freaking impossible. We’d try new strategies every time on the final battle, but we still felt like the last scene in Butch Cassidy and the Sundance Kid every time we jumped over the wall. This time, we had it at challenging, used the assault drone and assault turret, full HW skill builds, using the Bakers Dozen and the Bullet King LMG (which is crazy powerful - no need to ever reload, just unload it as if you were a non-stop assault turret of your own) and when we finished it we said “is that really it? Is it really over?”

Nothingbutskillz has some good builds on Youtube, he describes them well, doesn’t claim to be the know all of D2, and in spite of his name has a variety of builds.

That’s interesting. I’m not really a skill build kind of guy, but I did watch a few videos from folks playing the first game with some seriously impressive skill builds. Ran through the highest difficulty missions solo. So I certainly know it can be done if planned well. I actually do have most of the Hardwired pieces, may be missing just 1 or 2. That’s true of most of the gear sets I own, I think I have 5 of 6 for the Negotiator’s Dilemma, Tip of the Spear and True Patriot and at least 3 or 4 of the rest. I have to keep reminding myself you don’t need all 6 for the bonus, I’m too used to running with classified sets in the first game.

I only have a couple of exotic weapons, a rifle called Merciless I think? And a pistol called Liberty. They’re both pretty good, nothing really amazing. I’ve never come across a Baker’s Dozen, is that a random pickup or do you have to do any quest to assemble it like Liberty?

Bakers Dozen is a classic M1A that people have been calling overpowered for a while. Just a named M1A rifle. They nerfed it a bit but for me it still is my preferred primary weapon (and it is also for my coop partner.)

I HIGHLY recommend getting the Bullet King exotic LMG. The ability to just unleash on rushers or a big yellow guy with non-stop firing (no need to reload) is amazing. We farmed for one for my partner, he really wanted one after he saw me using mine. He loves it now. The way you got it previously is you ran one of two missions in NY; one was Wall Street, the other was the Tombs. The final boss on those would eventually drop it. Problem with the Tombs is the final battle takes a long time if you’re farming (due to the design of that battle.) The first time my coop partner and I ran Wall Street, as part of the manhunt missions in WONY, the last battle kicked our tails. We would get overwhelmed, overrun, use up armor kits, run around like crazy, and then die trying to take out the three big yellow guys who stuck together. It took us forever to finally beat it, with slivers of armor and health left. And we were maxxed out levels. We were both using red/dps builds.

This time we got to the last battle, took a deep breath, full skill builds, ran and jumped into the area with the armor and ammo crates, put our skills up on the walls around us, ducked, and our skills quickly took out two of the three big yellow guys, and my Bullet King and his rifle and our skills took out the final boss, all in less than 2 minutes. Literally. Once we killed him we waited for the waves of bad guys. Nope. Mission complete. Could Not Believe It. BK didn’t drop, so we ran Wall Street again. Got to the final battle. 2 minutes, done. We did it 5 times and the BK dropped for him.

I was exhausted before your last sentence!

Well, I don’t have Warlords of New York so looks like I can’t pick up a Bullet King. Maybe down the road I’ll get it on sale.

I THINK BK has been added to the general loot pool with the latest update, so you might just farm LMG targeted areas. Named bosses are probably highest probability, so CP4 and bounties may be good opportunities. I really like bounties: named bosses in a lot less time than required to clear a CP4.

So I got to WT5 in the base game, did all the story etc & had a great time…but ultimately burned out after many many hours…more than 200 I think

Accepting that MMV of course.

The setting is a cool return to the first Division game, this time in summer, and probably worth it just for the new environment. The missions are decent, the main quest thing is fairly short, but I found the experience well worth the cost of the DLC.

ok thanks maybe I will bite. But I’ve missed the Ubiforward promo discount damn it.

For me, I’d milked everything there was to take from Div2, done every mission dozens of times, explored every inch of the map, etc. WONY was worth it just to have a new world to explore. And it’s pretty cool, IMO. Yeah the new manhunt missions are, mostly, pretty good (though the final Keener mission is a bear) but, for example, you can explore almost all of the Chinatown area from rooftops.

Well that was frustrating. Spent 2 hours setting up the food truck (4 hunters at once) encounter only to have our group each miss 1-2 of the masks/keys.

Stuck it out in group with clan mates for another hour and redid it another 2 times until everyone had their missing masks.

My coop partner and I have decided, after about 1.34 million hours in Division 2, to finally hang it up. We’ve optimized about 7 kinds of builds (including a couple of skill builds that are crazy powerful) and maxxed everything out and just feel like we’ve done everything and seen everything and its become really repetitive.

We’re now scratching our open world military coop itch with Ghost Recon: Breakpoint. Very different, more “realistic” feel, terrible interface, turned off gear score so no constant trying to level up gear and weapons score, and since we don’t care at all about story (didn’t in Div2 either) and just want a big open world sand box to play in, enjoying it a lot. Posting on that in the Ghost Recon:Breakpoint thread.

We got WAY more than our money’s worth in Division 2. Enjoyed the heck out of it. Played mostly solo but later almost always coop, no raids or playing with strangers or DZ. But the amount of time we spent playing in it was a great hours to dollars ratio.

Got all DC + NYC hunters done. Just need Eagle Bearer from the Dark Hours raid to finish the DC wall. 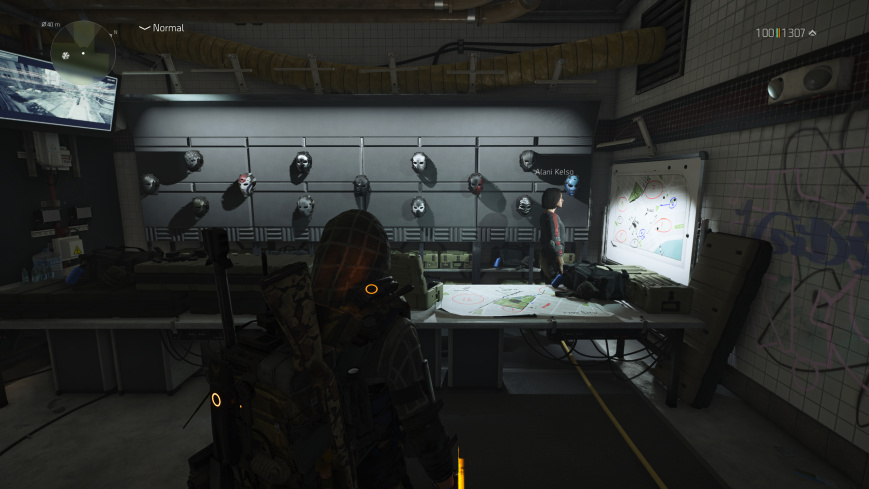 So I’m raiding now. With the clan, it’s fun. Tried with randos from Discord and it was an utter shitshow.