I’ve got eleven hours into this autobattler and it continues to kick my butt. Still searching for my first win. And yet, I keep itching to try again.

The Dungeon Beneath is lane-based, with three lanes. A hero character sits on the back column while the two columns in front can have up to four (usually) allies, plus summons. The enemy field is set up similarly, including an enemy hero in each room. You can rearrange characters before each fight and move between rounds of a fight, but most characters will become exhausted (can’t attack that round) if you move them after combat starts. Characters and enemies have a speed stat which determines the order of attack. Most will attack the closest enemy in their lane. Hero characters can be hit in any lane (the exception being effects that target entire lanes).

Once you get past the tutorial, your hero will start with a relic. Your party always starts with two generic cultist types plus one other character. The cultists can’t level up, so you will generally ditch them quickly. Battles drop xp pots, which can only be given to allies that survived the fight. All allies will be healed fully for the next fight, but hero damage persists.

Between fights, you may have the choice of visiting a campfire to recruit new characters (note the level of characters you recruit increases, so if you pick one up late, they will be max level). There are also item shops, potion shops, and an item transformation npc. There’s also an npc that looks like a mind-flayer that gives the option of challenges for the next fight for extra gold.

Each character can hold one item per level. Some are just stat boosts. Some have effects when you kill an enemy, or when you took damage but survived, or when any character dies, or just at the end of each round. I can see the combinations: a guy that attacks whenever he gets armor. Another guy that gives armor to an ally in their lane. Another guy that heals everyone in the front column. But I simply haven’t been able to put a full working build together. It’s much more difficult than with something like Astronarch.

I’ve done close to twenty runs now, and I’ve reached a final boss one time. On my second run after the tutorial. If I had given the last item I bought to a different character, I might have had a shot. Since then, I haven’t gotten close.

There is some progression when you fail, including ally and hero unlocks. Some of the ones you unlock seen better than the basic ones, others just different.

I wanted to bring this to everyone’s attention because I’m having fun with it. And maybe someone can help me figure out how to git gud.

Oh, I almost forgot, the synthwave(?) soundtrack is limited, but fantastic. The pixel art… looks better than Astronarch.

Also, this works great on a tablet over steam link. The only thing you can’t do with left-click is remove items

Sounds like you’d recommend it to someone who enjoyed Astronarch?

I would, yes. One difference is that in this game, if a fight goes wrong, you will know exactly why.

I think this game feels more “meaty” than astronarch, and far more difficult.

the art is prefab, purchased from a kit. not a dis just a fact, you’ll see it in other games

And wouldn’t you know it. I just obtained my first victory.

Here was my set up: 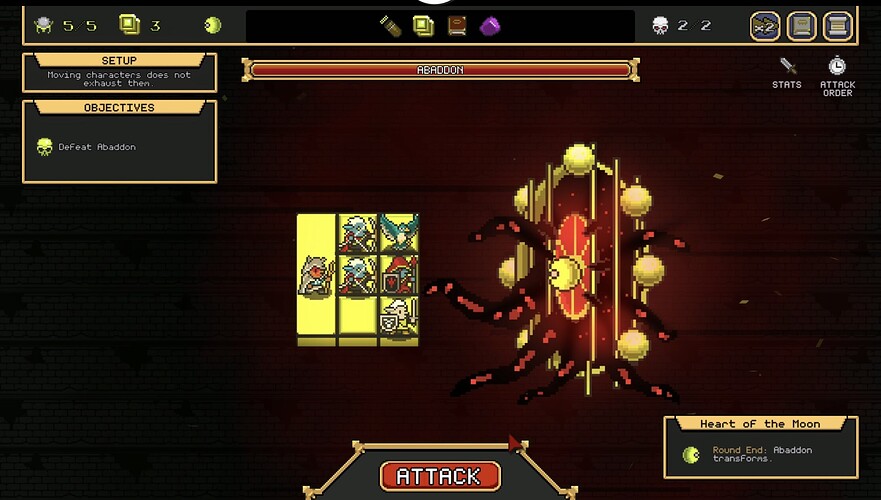 You will notice the two archers in the middle column are identical. I got lucky here. I used a potion on a fighter I didn’t want, to transform it into a copy of an existing character (without items). This gave me two level 3 night marksmen. When an enemy dies (Called Doom), these guys get +1/2/3 power for their next turn. The other critical piece is the Channeler at the front of the middle lane. That unit triggers all doom effects, giving the archers each an extra +3 damage every turn.

One of the things this boss does is poison the character with the lowest health, which took out three archers in the middle row eventually. The last round looked like this: 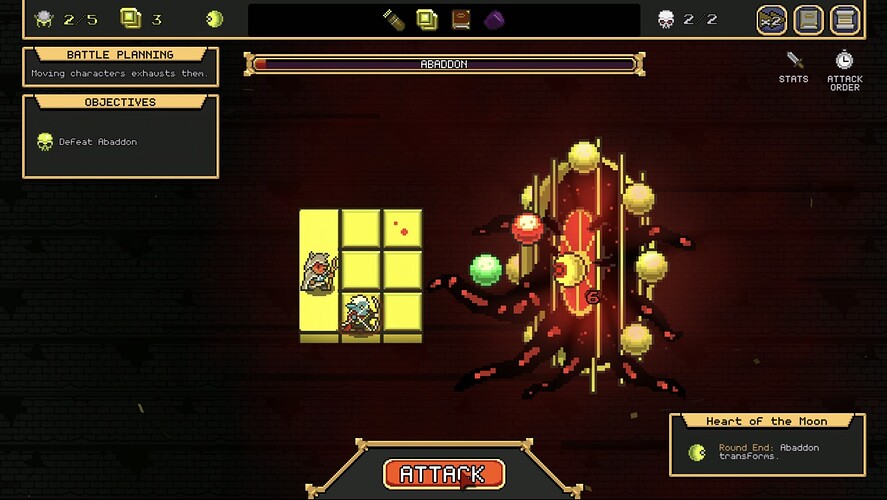 I don’t recall what ability the boots was going to use this turn, but given my damage was now drastically reduced, this was a very close call.

I was so bummed Astronach wasn’t on OS X - this one is, and also on sale. Perfect! I got it.

Didn’t even realize that.

Allright, got to sit down with this now. Does not really play like any auto battler I’ve played before, there are some decisions in between every round of attacks, and there is a strict order of attack based on initiative (looks similar to Into the Breach). Seems like the best option is to do nothing between turns most of the time, as any unit you move won’t get to attack. Lost a couple of times now, but this run I have one of these “trigger doom” guys, and two guys with doom effects. Seems like it’s going better now.

There are units that can move without being exhausted (labeled inexhaustible), both heroes and allies. The sword dancer is one that does good damage if you can keep his health topped off.

Ah, that was what that trait meant! I somehow made that out to be “you won’t get rid of whatever it says on the line above this text”. That surely will make the dancer more useful.

Yup, the boss was simply a walkover with a build pretty similar to @Misguided I realize now. Much easier than some other encounters that actually had scaling. I only had one frontliner, and the doom-elfs kept spawning new stuff, and that gave my archer +3 attack, and so I pretty much killed all the orbs the round they spawned, triggering more doom, etc. 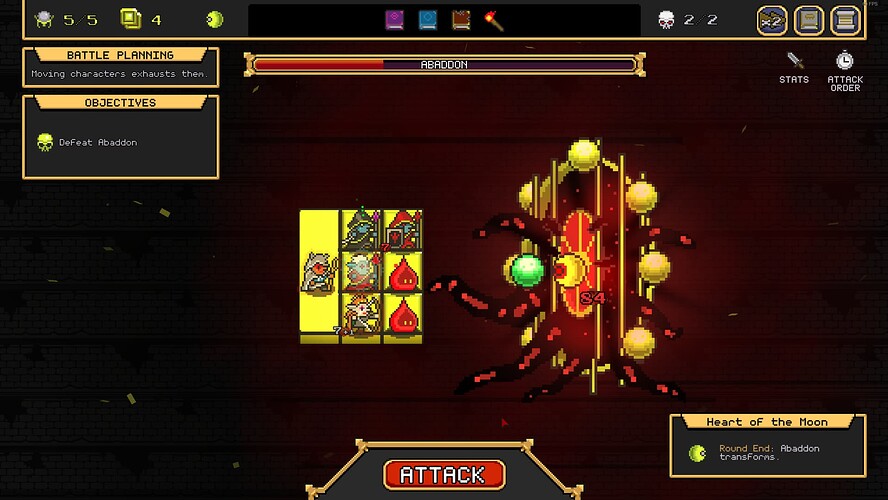 Aha, I see! You can tell what end-boss you’ll get based on the hero you select.

Yeah, there are already different bosses. And wow! I barely beat that guy but you coasted, nice!

Started in on this today. Runs are longer than I’d thought! Is there anything equivalent to the StS map to give you an idea of where you are and what’s coming?

My experience so far is that most of what you need to do is ramp damage. Killing shit before it kills you seems to be the bulk of what’s required to progress.

Slapping bosses for 12 with the “double damage to poisoned chars” witch is pretty great.

Yeah, you can’t go all in on defense, it doesn’t work. Of course, you do need to protect your damage dealers.

Ah, I did just discover the floor counter. So at least you know how long until the section boss.

Lots of variety in equipment and followers and heroes and artifacts! Good stuff.

Got my first win with that poison witch group against Abaddon. Man, poison definitely needs a payoff though - one extra damage per turn is just not that good in a lot of encounters, especially bosses.

Yeah, you have to find a way to multiply damage somehow. It would be different if you could stack poison