So I’ve had this since 2014 and I’m pretty sure I have all but the most recent two expansions (Greymoor, Blackwood). I think the cheapest way to get them both is to just get the Blackwood Collection. It appears to have all previous DLCs in case I missed one at one point. And I sub for sure anytime I play this for a few months. All the perks are totally worth it.

btw, did they do a graphics upgrade in the last year or so? I swear it looks a lot better (not that it was every bad).

btw, did they do a graphics upgrade in the last year or so? I swear it looks a lot better (not that it was every bad).

I don’t think they did an engine upgrade but definitely every DLC looks much better, perhaps they have higher quality textures.

@Vic_Davis I played a lot in Cyrodiil over the years as ranged DPS and lately a healer. They killed the fun for me when they forced healers to group up to heal. I always enjoyed being able to heal people on the fly and that’s gone now. Makes me sad. I’ve stopped playing again and don’t know if I’ll be back.

I thought they were talking about changing it so that you could get heals from non-group members but I took my break back in October and only skim the boards occasionally. I think their argument was performance but like so many of the tests that they have run, the results and any changes that they have made have had zero impact on the lag.

It’s a real shame because I love this game and I love Cyrodiil when it works. I admit to having a rose tinted / halcyon mythic love of the first two or so years. Maybe the lag was just as bad back then? I do know that I really enjoyed the game before the Champion Point system and the Great Magicka / Stamina split. I’ve stuck through it with all the changes over the last 7 years. It’s always been fun even if it was laggy or the meta sucked.

This no proc change is just not very well thought out. I haven’t even checked but I would suspect the server pops are terrible. They weren’t great back in October. By the time I take my break I literally know the names of almost everybody who plays when I do. Everybody likes to complain about how no proc doesn’t require any skill yadda yadda but the developers built a combat system where you have 90% sets having proc conditions. And skill is over-rated. Good ping wins when the players are close to evenly matched. Anyway, like you I’ll be taking a break. It does make me sad though. Usually I spend a good chunk of May and June ganking Tyros. :)

Healing has now changed back so you can heal others not in your group.

OK, good to know. Thanks.

The new champion points system is an enormous improvement.

I’m not coming back to play for realsies until I can get my very own Lydia though.

Latest update, ESO will be updated for XSX|S and PS5 with the Lydia expansion, coming June 8 on consoles (and June 1 on PC).

The Anniversary Jubilee starts tomorrow. That’s two weeks of double XP and extra rewards with each daily quest, amounting to an enormous influx of gold and loot for most players. If you’re thinking of coming back or trying it out, now is the time.

Greymoor is back on sale. $16.50 gets you totally caught up on expansions.

and Crowns is on sale, if that is your thing…

Is this real? really? A companion system is coming to ESO? Why isn’t this amazingly big news?!?!?!? If this is some sick, 1st of april joke, I will block you forever!

It is, really. They announced it back in Jan. And you could build rapport and customize their skills!

Build rapport, level their skills, and adventure across Tamriel with Companions - coming with ESO: Blackwood. https://t.co/BNUooBWYeI 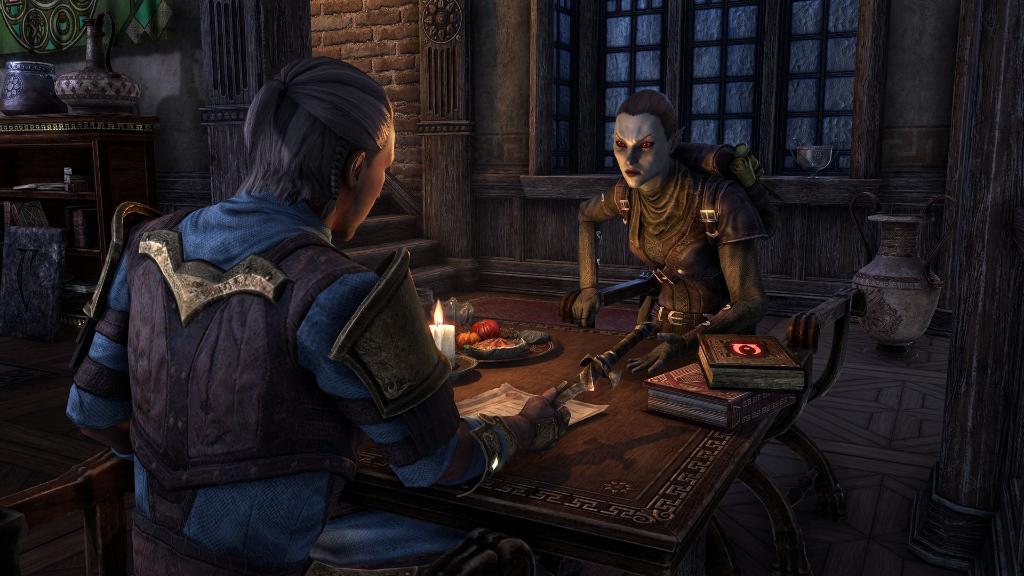 So, my favorite MMO gets my favorite system of any game, a companion system, and no-one called me to tell me about this?

I wasn’t aware you were expecting a call, but I did post about it in the thread!

So now you can earn a currency doing daily/weekly activities that can be used to buy stuff formerly only found in crates. Seems like an unambiguously great change. They should get rid of crates entirely and make those items purchasable directly for crowns too.

Complete new daily and weekly activities, called Endeavors, and you can earn a new currency to acquire Crown Crate items. Learn about this new system and currency here!

I mean, they should but lootboxes are unambiguously way better revenue generators than individual cosmetics purchases (and of course they do that too).

I don’t personally think grindy daily tasks are a huge improvement, but it’s still better than spending money. Especially if they end up being practical to complete ambiently while regularly playing, as they’re suggesting.