I’ve been playing The Excavation of Hob’s Barrow, a point-and-click from Cloak and Dagger Games, published by Wadjet Eye.

The main character is Thomasina Bateman, an archaeologist hoping to excavate a notorious barrow on the moors outside a small village. The townsfolk (you’ll be shocked to find out) are a combination of helpful, superstitious, and sinister. There are flashbacks to Thomasina’s memories of her archaeologist father, and eventually strange visions that her scientific mind can’t square.

The puzzles are not trivial, but I haven’t been stuck for more than ten minutes or so. It has the look of so many Adventure Game Studio games. If you’re familiar with Wadjet Eye’s oeuvre, you probably won’t be bothered by it, but it does have those stiff walking animations and a bit of hotspot hunting. But it also deals with a lot of the shortcomings with the smart application of fade outs and jump cuts, and it has a number of handy innovations (relative to the genre) like a map for fast travel and a key to reveal all a screen’s hotspots. It also has some unique pixel art close-up animations of its characters often grotesque faces, just to unnerve you that much more.

I’m about halfway through, and I find the unfolding mystery to be quite compelling. I’m also in the middle of the new Monkey Island, but I’ve wanted to see Thomasina’s next chapter a lot more than Guybrush’s. 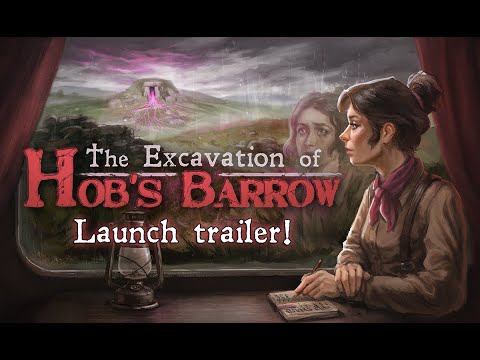 This is currently in my cart alongside The Case of the Golden Idol and Frog Detective 3! :D

Yeah, I forgot to mention that all their voice overs (which were directed by the Wadjet Eye head guy Dave Gilbert) are excellent!

This is currently in my cart alongside The Case of the Golden Idol and Frog Detective 3! :D

I haven’t played the third Frog Detective, but I did play the first two. And I would buy them in this order, if you’re looking for advice:

I thought you were a Game Pass member, you can play this there.

Oh I frogot it’s on there! It’s only a few quid though so I might as well support the dev, especially given I like Grace Bruxner’s sense of humour and the previous games.

Having finished it, it’s excellent and classic horror that ramps up quite a bit late in the game. I felt like the mid-late game got a bit fetch chain but overall more than worth it.

For those who’ve finished it, what length of gameplay are we talking? I recently played the new Monkey Island, on easy mode and finished it in 10 hours, which was honestly a nice solid and enjoyable amount of gameplay for my money without too much annoying hair pulling. What’s the range on this game?

I finished this, so some thoughts about the ending:

It’s not a happy ending, which felt mostly right to me. At the same time, the game reveals to you what Thomasina is being manipulated into and how bad it might be, but it doesn’t quite capitalize on that dramatic irony by showing her being meaningfully convinced or tricked into doing what she shouldn’t.

Similarly, and even worse, the character of Thomasina jettisons her primary personality trait, which is her desire to understand history and apply rigorous scientific scrutiny to the site of Hob’s Barrow Admittedly, I have a hobbyist interest in how real archaeology is done, so I was excited to see that portrayed. But once she’s in the barrow, it’s a string of contrived puzzles in a totally unbelievable space. Thomasina waves off dozens of pots (fragmented and intact) as unimportant… which is the last thing an archaeologist would do–even, I would say, in a site with unexpected structural features. In other words, it feels like a point-and-click puzzle fest; it feels a bit rushed; and it undermines the rest of the story, which is well set-up up to that point. I think the titular excavation could have been presented in a more realistic way and still had puzzle challenges and a spooky finale.

Overall, its sins are ones that plenty of other good-to-great adventure games have indulged in (arguably, Gabriel Knight does this elaborate ahistorical puzzle-space too). But because of how the first half of the game presented itself, I was expecting something different and more grounded.

Kind of a shame, but I still liked the game, especially as the work of a small team.

Overall, its sins are ones that plenty of other good-to-great adventure games have indulged in (arguably, Gabriel Knight does this elaborate ahistorical puzzle-space too).

I haven’t played this yet (it’s on my to do list) but reading your description I kept thinking on GK1’s snake mound. Do you think it might actually be an homage?

I haven’t played this yet (it’s on my to do list) but reading your description I kept thinking on GK1’s snake mound. Do you think it might actually be an homage?

That’s exactly what it reminded me of, so it might be partly that. But I think this is a little bit clumsier. Not that it’s fair to compare this with a Sierra classic.