The fall of the house of Nixon

Blumenthal article arguing that Bush is presiding over the crackup of the GOP’s Nixon coalition. It is interesting that no one’s really noticed a few long-run earthquakes in political issues; the changes have occured so slowly, the media never really caught on:

Basically, all the big issue changes on the ground since 1992 have been electoral catastrophes for the GOP; every one of these was used to browbeat Democrats in elections. Bush’s 1998 campaign against Dukasis would be impossible to even remotely replicate today - flag burning? Willie Horton? It might as well be from 1910 for all the relevance it has.

Throw this in with Teixeira’s observations about demographics and economic power shifts, and I’ve really got to wonder how the hell the GOP is going to win elections in 8 years or so. 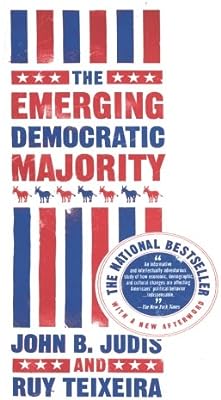 ONE OF THE ECONOMIST'S BEST BOOKS OF THE YEAR AND A WINNER OF THE WASHINGTON MONTHLY'S ANNUAL POLITICAL BOOK AWARD Political experts John B. Judis and Ruy Teixeira convincingly use hard data -- demogr ...

Well, break up the unions and government programs. Disperse federal power to states. This should ensure regionalism and dependance on locally influential corporate and religious sponsors. They seem more than happy to organize suppliers and clients into umbrellas of fundraisers and turn out parishoners as issue voters respectively. Divide and conquer.

I think that’d just about do the trick.

Aren’t people already constantly bemoaning that relatively poor southern men vote for the Republicans despite having seemingly no rational reason of doing so?

It seems like wishful thinking to me — “the fear of black people” is alive and well, in the country as a whole. Let any handgun enthusiast talk for five minutes and they’ll be in full Alamo mode by the third minute. Let any tax conservative talk and it won’t take one minute for him to say that certain shif’less elements are trying to leech his money away. Hell, the nation is crawling with zitty white teenagers in baggy pants whose entire identity is built around an attempt to get on the other side of “the fear of black people.”

And even if the crime wave is over, “tough on crime” won’t be any less effective a piece of rhetoric as long as people are scared of the criminal characters they see on TV. 50 Cent is coming for your daughter and your Buick! Vote Bush!

Yes, it still matters some. No, it’s nowhere near the nuclear importance it had in the 1970s and 1980s; Reagan won working class white guys on crime and welfare. The GOP can’t do it anymore because crime and welfare have more or less disappeared as top 5 issues for persuadable voters.

I wouldn’t be so quick to write off the GOP’s tactics. There are still plenty of wedge issues capable of hijacking the electorate.

Namely guns. As Bill Clinton so eloquently put it, it wasn’t Nader that cost us the 2000 election – “It was the NRA. They hurt us bad.”

I didn’t read where Clinton said that, but do you think its true? Yes Bush won the Southern states, but he lost all or most of the pro-hunting swing states (WI, IL, Michigan). Could Gore have really won in the South regardless of the gun issue? (Tennessee aside, he probably should have taken that.)

Jason, have you gotten around to reading “What’s the Matter With Kansas?” yet? Although I have a lot of issues with the book, Frank brings a very powerful analysis to the table that is related to the long term political issue you bring up. It’s worth looking at.

Yeah, it’s on the Amazon wish list. Opinion seems to vary wildly; from “damn he’s right” to “I saw that guy on TV interviewing wearing pinstripes”.

Yeah, it’s on the Amazon wish list. Opinion seems to vary wildly; from “damn he’s right” to “I saw that guy on TV interviewing wearing pinstripes”.

I used to publish in the Baffler, Tom Frank’s magazine. Once, at an issue-release party, his (unbelievably pompous) brother confided in me, “Thomas and I do come from money. But it’s socialist money.”

That still cracks me up…

You’re shitting me! Man, everyone here is wired. I’ll have to remember that line…