Also, the soundtrack is most excellent. I was only ten minutes into the video before I had to pause it and look for the soundtrack. It really stands out and is worth a listen by itself.

The history of video games might go back farther than you think.

My first was a “Pong” machine, followed by the Atari 2600. What are your earliest memories with regard to video games?

What are your earliest memories with regard to video games

I bought a pong machine at Sears…I am very old.

While this doesn’t qualify as a video game, here’s an Electro-Mechanical game from 1970 called “Invaders From Outer Space” by Midway. It was coin-operated. I don’t remember seeing this one anywhere, although I was ten years old at the time.

I put this here primarily because it was mentioned in the documentary as an example of the Electro-Mechanical era.

First one I remember playing was something very similar to this Star Trek game on a Unix system, in about 1977.

When I played it with about 30 others in a large computer lab, outputs were handed to us on paper from a Teletype which was screaming away in the corner. I was 6 years old so it’s a bit fuzzy, but getting those printouts was ridiculously exciting. I have no idea whether there was any networking of players going on, probably not.

Shortly after we got back from that lab visit, my dad bought this Grandstand 3000 games machine. It played several variations on Pong. 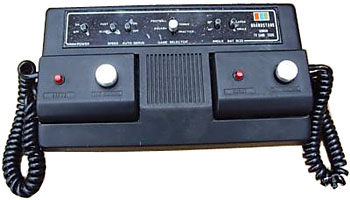 That was it for several years until we got a Sinclair ZX81 (Timex 1000 basically). In between my only exposure to video games was playing Space War in an arcade once a year. While I remember the arcade having some of those electro-mechanical games, I can’t recall any details at all.