The future of Quarter to Three's message board

Yeah, some of those names are a suprise to me as well, though I don’t follow some areas very well and generally stay out of threads I have no interest in. I guess we have to give the benefit of the doubt that those people have been given multiple opportunities to reform in the past.

Its going to be different, for sure.

I second this motion. Clean(ish) slate.

Definitely thirded, it seems appropriate to at least offer a probationary period first.

I can’t speak for the whole list (nor would it make a difference if I could, because I cannot know the PMs and such) but many of those on the list have been very vocal (or the writing equivalent) about Tom and his policies, despite repeated warnings against such behavior. I can almost guarantee that they would be continuing this course in this thread if they were not banned.

I agree that from my perspective many of the people on that list are good posters who have been respectful in my experience. I’m just noting why Tom might (rightly) feel that there is no need to give a clean slate to them. It would not be a second chance. In many cases, it would be a fifth or sixth chance.

Note that this does not mean I agree with the bannings (or disagree). I’m just trying to explain them a bit, especially since Tom dislikes doing so.

Oh, and welcome back!

Yeah, I think there should be some sort of amnesty in light of what happened the past few months.

Granted, there have been a lot of disputes. I just think it’d be nice to at least make the attempt. Why start the new regime with an unnecessary tide of blood when we could have flowers, right?

I was saddened to see Cubit’s name on the list after reading these posts:

I guess I’ll start 2012 off with a positive online dating story. Early in 2011 I came out of a bad five year marriage that was the result of being young and Christian. ugh. By June though I was ready to meet some new people. I knew from reading this thread that OkCupid was one of the better sites, so I signed up and messaged a few high matches including one that really caught my eye, but she lived an hour away so I didn’t think much would come of it. I’ll call her “ladyparts”.

I went on a couple one off dates that didn’t go anywhere, but during this time had been exchanging countless messages and soon phone calls with ladyparts. We decided to meet near her place and had some pizza and then went to see Super 8. I think we were both a little apprehensive, but after spending time together it became clear that we connected really well.

A quick anecdote: When I first started seeing ladyparts, my divorce wasn’t quite final. I agonized over how to disclose this. On our second date, as I nervously tried to bring it up over our meal, ladyparts jokingly asked “you’re not married, are you?”. I was shocked and responded with “actually…” and then went on to explain the situation. My worrying was ultimately for nothing though, as she was very understanding and accepting of it all.

Today, Ladyparts and I have been bf/gf for nearly six months, and despite the distance we’ve managed to see each other every weekend since we met. She has helped me repair relationships with friends and family that I neglected during my unhappy married years, and has gotten me excited to revisit some old dreams and hobbies that I had abandoned.

No relationship is perfect and we have our rough days, but I feel as though I’m growing and developing as a person for the first time in a very long time. I hope I’m having a similar effect on her.

Later in the spring she is moving towards better job opportunities, and we won’t be living so far apart anymore.

Here is a picture of us taken right before the holidays: 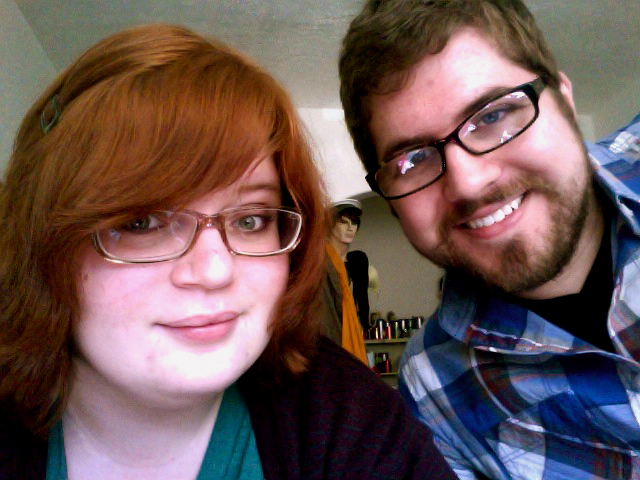 That is actually her mannequin, named Kevin, and he manages to perfectly photobomb nearly every fucking photo I try to take in that apartment.

Haha, in my defense that name is her own internet handle that she uses on a couple of different sites. It existed before I even knew her.

Like I mentioned briefly in the post, in my late teens/early 20s I was a fundamentalist Christian. This led to an early marriage based more on religion than an actual healthy loving relationship. After a couple of years I realized how batshit I had been, and began to feel trapped in a marriage where I was now an atheist and my wife was still a devout believer. At that point I kind of shut down for a couple years in a depressed state as I tried to make a relationship work that was based on something that just didn’t exist anymore.

Eventually we talked things out and separated followed by a divorce a few months later.

Thankfully, no kids were involved.

Once I escaped that religion and that relationship, it felt like a huge weight was off of me. I was free to explore who I was and what I wanted out of life without that shit hovering. I feel like I’m on a positive path now, one that ladyparts encourages me greatly on. For many years I was on a negative path and very unhappy, which honestly probably affected how I acted on Qt3.

I guess the important part is that he’s turned his life around for the better, not whether or not he can post on Qt3. But maybe there is more going on behind the scenes that I don’t know about.

Jeremy Johnson? Maybe you mean James Johnson as Jeremy is the most inoffensive person I know.

Then perhaps a one chance and done thing. I don’t want to speak for anyone on that list because I don’t know them, but at least one member on there was posting in the last few days about the reason for his poor behavior in the past and seemed apologetic and sheepish about it. I’m hoping some conversation can get him back on.

Wow, had no idea those folks were volatile or anything. Guess I missed those conversations. Whew! :)

I think this is a terrible move, it doesn’t improve the forum in any way, and it’s very telling that the handful of genuinely awful posters who screw up every thread they participate in are left untouched.

Thank you. Seriously. I work at a pretty open company that allows some surf time, but the NSFW posts were getting out of hand.

Jeremy Johnson? Maybe you mean James Johnson as Jeremy is the most inoffensive person I know.

I was thinking the same thing, actually, but I may be biased since Jeremy was my Secret Santa! He’s good peeps though, in my book.

BTW, Tom, I can’t see the infraction on the post. I can see why it was given one, and maybe that’s what you meant by ‘example’ but I expected us to be able to recognize when one was given.

2012 could be very interesting for Quarter to Three for reasons that I can’t talk about yet.

My take: Sounds like you have an affiliation deal in the works and the habits of certain posters could put a damper on that.

I think this is a terrible move, it doesn’t improve the forum in any way, and it’s very telling that the handful of genuinely awful posters who screw up every thread they participate in are left untouched.

I agree. Most of the banned people are what I consider to be quality posters around here.

Me neither, though Tom did link to a post with a GIF that featured huge, bouncing boobies. I have to say that while I appreciate and respect the rule against posting such images in the forum, I am not displeased that I saw the GIF.

I was directed to a blurred out sideboob from a magazine when this question was last asked.

edit: I think the linked boobs were an ironic example since they were posted a couple days ago as a joke about Tom’s mail.

Wow. That is really not the banned list I expected.

In the new regime, Octonoo is okay but Hans isn’t?

I can’t even begin to make sense out of that.

I definitely agree with the growing “wait, what?” chorus.

I had no idea about Hans and Matthew, I enjoy their posts.

Wow. That is really not the banned list I expected.

In the new regime, Octonoo is okay but Hans isn’t?

I can’t even begin to make sense out of that.

I definitely agree with the growing “wait, what?” chorus.

The logic appears to be that it is OK to piss off the entire community, but pissing off Tom is asking for the banhammer.

I agree that some of the people on that list have seemed pretty reasonable to me, but I also know that I read the forum fairly selectively, so I miss a lot.

I do agree with Tom’s internet living room ideal, and frankly it’s the kind of living room I want to hang out in too. What’s wrong with having a corner of the Internet where manners are still important?