Lol I got 2 keys and there was some random deal for paying with PayPal so 100 days of gamepass for an existing sub cost like $4. Already redeemed, so it works.

You can get free games for three years… or get half a tank of gas.

Should I be grabbing one of these deals now? I don’t have a Series X or any interest in xCloud so I plan to stick with PC Game Pass. Any advice on how I should handle my subscription for the best deal?? Thanks!

You gotta shut off automatic renewal IIRC. Then you can load up your account on “normal” subs. Then you can do the conversion to ultimate (for up to 3 years at a time).

Yes, convert to ultimate so you can take advantage of these deals.

Or buy three years of XBLG now and convert it into GPU after your PC sub expires. That would be even better.

Thanks, just bought 4 of them and topped of my Ultimate subscription for 3 years again.

Replaying Dragon Age Origins now through the EA membership so I can have the ultimate edition.

Or buy three years of XBLG now and convert it into GPU after your PC sub expires. That would be even better.

Be advised though, there’s always the chance that the rebate rate will change before September… But I’ve been assuming Microsoft works fix this loophole for ages, and they never do.

I doubt they’ll ever change the conversion rate.

I do expect them to stop selling XBLG entirely at some point though.

Thanks for the advice! I’ve been waiting to do anything until that expiration date in case anything changes. (Also because I think it’s confusing as shit.) Guess I’ll deal with it in September.

Converting an IRA is less confusing and better documented.

I’m so confused I can’t even tell if that’s sarcasm or if you agree with me!

I think we all agree with you, but the thing to remember is that we are exploiting loopholes in how MS markets and sells Gamepass. I am sure they are aware of this, but are turning a blind eye because its boosting their subscriber numbers and they aren’t confident they can bilk us for the retail price yet. I am sure that will change eventually.

But now I don’t gotta worry about it until 2025!
I’ll likely be dead by then! Joke’s on you, corporate fat cats!

Well look at that :) Gave Cloud a try with X-Ray Sniper and English Forza. Pretty cool tech but my resolution wasn’t great. Forza squandered all the goodwill of the immediate start with incomprehensible menus and unskippable DLC adverts, but thumbs up from me all the same.

MSFS works well too. I don’t know what settings the Xbox version is using but it looks great.

Origins won’t let me even try to start it though. Wonder why. Halo Infinite works well but the limited view (used to ultrawide) and gamepad control are challenging for me. Very nice how easy it is to check things out.

So what controls whether something has a Cloud version or not?

AC Origins definitely works on xcloud, at least on Android.

And now even cheaper yet! How low will it go?! 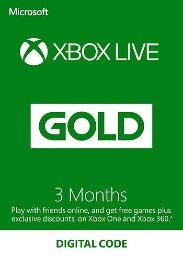 Multiple Sellers via Eneba have 3-Month Xbox Live Gold Subscription (Digital Delivery) for ~$6.33 when you apply discount code 10PAYPAL and pay via Paypal at checkout. NOTE: You may have to change ...

Must be Sweeps week.

Must be Sweeps week.

You’re correct, and for my part I’m hoping @stusser gets picked up for at least one more season, but either way I’m impressed he’s got this much sway with XBL code resellers!