I also lost my opening match as Medvedev vs [Spaniard] 0-6.

It is worth buying if you’re into oldschool CRPGs and want to own it permanently. That’s kind of the beauty of Game Pass, you can play highly anticipated games like Starfield on day 1 and then buy them a year or two later when they’re off GP and cheap.

True, that was a poor example.

Although I do plan to buy Starfield when it hits $30 regardless. I want to own all the big RPGs.

Maybe I’m just cranky and old, but i have a hard time believing that Starfield won’t be a mess like No Man’s Sky. Glad I don’t have to pay for it. I mean I love their games usually, but I’m super skeptical on this one.

It may or may not be a mess, but the budget is 10 if not 100 times larger than NMS, and the staffing is probably at least 20 times more. If it’s a mess, it’ll be a mess for Bethesda reasons, not because of any similarity to NMS.

Sure. I wouldn’t call that a mess, personally, but that could well happen. But I would be very surprised if there weren’t also a robust set of Bethesda style story and quest heavy locations within the universe.

I would-- it would be a reversion to Daggerfall, when Bethesda focused on an enormous play-space that was completely bland. That sucked.

Of course that would only apply to those 100s of generated planets, I’m sure they would still have hand-crafted play areas too, so not quite as bad as Daggerfall.

I also lost my opening match as Medvedev vs [Spaniard] 0-6.

I put the difficulty down from 2 to 1 (semi-pro to amateur, I think) and won the rematch!

After going up 2-0 I lost four straight games and was like “This some bullshit. Doesn’t seem very Amateur” then bounced back to 4-4. Saved three match points at 5-6 to take the match to a tie break and then won that 7-1.

The actual tennis reminds me a bit of Tennis Elbow with nicer graphics, which is quite the statement considering in Matchpoint Tennis the players look like they might have a skin disease, there’s a weird glow emanating from their hair like their scalp is covered in ghosts and cutscenes show a walking animation that suggests the players are actually aliens trying to convince passers by they’re human.

The matchplay has the same style of mechanics as TE - run into position as early as possible, start to power up a shot and then move an aim point for where you want it to go.

Serving feels underpowered though - too often you can place a fast first serve right in the corner and your opponent runs around it, gets into Karate Kid Daniel San position and hammers a return past you that looks four times faster than your serve.

On the plus side, career mode allows you to make your player look like this 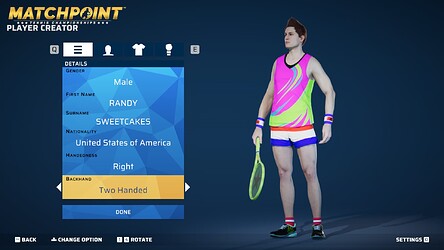 Oh, also, the in-game commentator sounds like he has been kidnapped and is in a dark room somewhere being forced to read political messages off of flashcards in a language he doesn’t understand.

Daggerfall came out nearly 25 years ago. I can’t imagine that project having any influence or impact on the what they do today.

I didn’t mean to imply it would, just using it as an example.

Really good timing for this tennis game. They have Kyrgios on the cover, and just as the game comes out, he reaches the final of Wimbledon.

Maybe I’m just cranky and old, but i have a hard time believing that Starfield won’t be a mess like No Man’s Sky.

Ya that’s what I’m thinking as well. I remember when it was first a thing and we were like WOW that’s going to be amazing. And then it wasn’t. Ever.

Agreed. One thing Bethesda is great at is locations and location storytelling. I wanted to visit all the locations in Fallout 4 just to see what was there. The main quest was silly and i skipped it.

Take the locations away and only have the quests (which I imagine will be more AI related gibberish) and what do you have?

x10 for me. The downfall of game design for me. There are situations it can be used, to help fill out some things, but when it’s relied upon for a large majority of content, it’s always felt really aimless to me. It was the difference between Everquest and DAOC for me. EQ had everything hand placed, when and where mobs were, and how you had to fight through them to get to bosses etc. It was really done pretty well, whereas DAOC was just random mobs arbitrarily strewn about, and the game really felt like that.

I think if you could use random generation to help you design levels/worlds, to speed that process up, it could be great. You could just cherry pick the good ones, and then design the play around that, sadly that’s rarely done.

Maybe I’m just cranky and old, but i have a hard time believing that Starfield won’t be a mess like No Man’s Sky.

The quid here is how much of the game is procedurally generated, in %, and how optional it is.

Anyone play Weird West? Just fired it up, looks interesting.