The General Magic the Gathering Thread

The name of my next band: General Magic and the Gathering.

General Magic and the Gathering.

You should be able to open for Edward Sharpe and the Magnetic Zeroes. 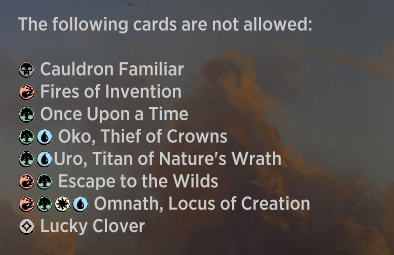 You know what’s badly overpowered in a 100-card format, much more so than regular standard? Yorion. Why they didn’t add the flying snake to the ban list, I have no idea. Played 6 games with my Yorion deck and faced 3 mirrors, which surprised me only because it wasn’t more.

Looks like WotC is really leaning into the crossover thing. Not sure I’m in love with the idea, but LotR Magic cards!!

The Warhammer 40k crossover will release in 2022, while Lord of the Rings characters will be included in unknown future sets.

Guy buys an old pack on a whim. Opens it to find a Black Lotus.

The story of how one man's questionable investment, and choices, become an unquestionably happy accident.

Phew, just scanned and colour sorted all my MTG cards. 4700 cards total, sans basic lands. I have not bought any mtg cards for 15 years, probably, and other than 600 or so of these that are from my youth circa '95, these have generally been bought on ebay bulk lots at various times and have been sitting in a cupboard forever. Whole lot of revised/4th/5th ed. Kind of want to sort them into a simple cube and simple mono decks to introduce my kids and nephews to the game.

No major surpises. No Black Lotus /sigh A few decent cards though, value wise. Several RL cards and a handful originals from The Dark or Arabian Nights or desired Revised cards. Maybe $2,000 in value, if you believe the collections sites’ valuations. Got a crash course in mtg card identification and ruled out most of the out-lying high value cards as reprints (white borders) rather than originals. Boo! Still, not too shabby given I don’t think there would be more than $500 of actual cash I put down for these over the years.

Congrats! That’s a big under taking - I did something similar when I scanned/sorted my cards into “stuff worth $10 or more” and “stuff worth $5-10” and put those cards (many of them sleeved) into cigar boxes for storage with me in my office, and the rest of the bulk rares/junk is sitting in a massive (heavy) box in storage. Of course, since I did that many cards have jumped in value and others have gone down, so I should really go through again and look for crazy valuable commons from old sets I bought lots of packs of, such as Rhystic Study is like a $25 card I know I had some of before, but now the only copies are ones I traded @ShivaX for. I also for example remember playing with Sylvan Library, but seem to have lost it at some point.

On the other hand, I buy new cards every set even when I’m not currently playing regularly - if nothing else we get together a several times a year to play Magic so it’s nice to have new/cool stuff to play around with when that happens, but it’s still fun to collect and maintain my decks and keep them up to date with the cool stuff I see come out. Hell, I’m taking off work early today to pick up a box of Time Spiral Remastered. Opening boxes and putting valuable cards in my cigar boxes (or my decks) will never not be a satisfying use of my resources.

There is no good reason on this planet that a Revised Braingeyser would be over $10.

It seems to have spiked in early 2021? Some Reddit thread suggested maybe off the back of Zaxara, a 2020 Commander with that can be abused with ‘x’ mana cards. None of these ‘valuations’ make any sense to me. /shrug 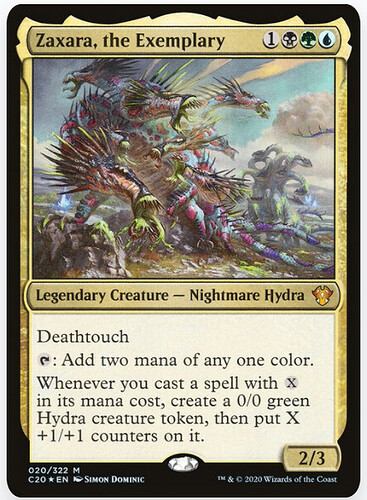 It spiked because it’s on the Reserved List. Any other reason is irrelevant at this point.

I cracked open a box of Time Spiral Remastered and pulled some pretty great cards - I got a very good value out of the box, over $360 worth of cards (summing up the value of cards worth $3 or more) but most of them are cards that will just go into my collection. Still, I did manage to pull about 20-25 cards that I very much want to add to my existing decks, and they totaled around the cost of the box ($180) so think I came out overall ahead.

Here are the top six value pulls I managed to score:

These time shifted cards look absolutely amazing in person, the card stock and print quality in the set is just perfect.

I miss the old format so much. 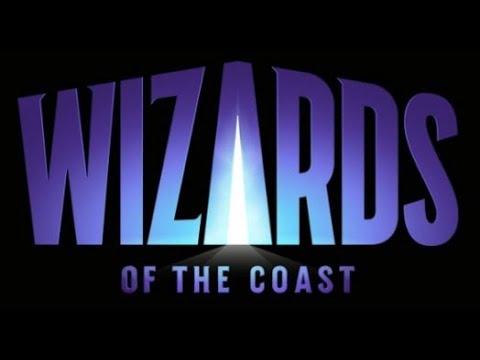 Finance/business side of things, which Rudy is generally pretty spot on about.

While I watch the above embedded video, let me share some gaming mouse pads I printed off for an upcoming draft I’m hosting with my friends - these are obviously not the original art, but rather my attempt at recreating the art. They turned out super nice - machine washable, incredibly vibrant, and the perfect mouse pad texture! 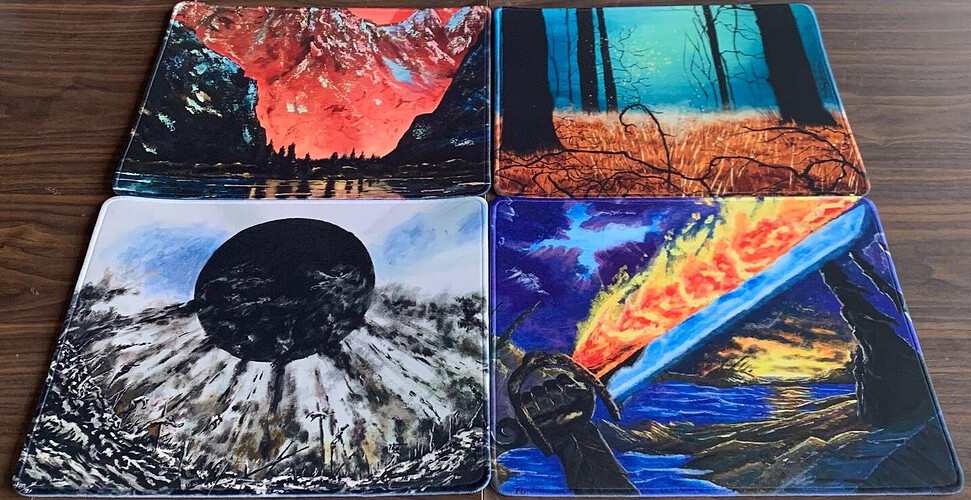 So, Strixhaven spoilers are rolling out. I hadn’t been paying any attention until Marshall mentioned it on LR, so it came as a surprise to me that the set theme is basically Harry Potter:The Gathering. Makes one wonder if there was an attempt to do a crossover - similar to Godzilla in Ikoria - that fell through.

Not like WotC has shied away from biting various steez over the years.

I was watching a Commander YouTube channel - it’s a decent channel, big following, called MTG Muddstah and while I’m not fully on board with their format (the four players are playing silently with edited footage to speed things up while a narrator records what’s happening in the game) it works pretty well to watch a quick game.

I commented on one video how it’s frustrating to see the one player put his equipment (and presumably auras) under the equipped creature leaving only the text box visible, seemed like a dumb way to do that. A reply asked me what could be better than seeing the rules text? My response was "no one can read rules text boxes from across the table, but everyone gets familiar with a card by it’s art/name which you can instead be what’s visible. I provided an example: 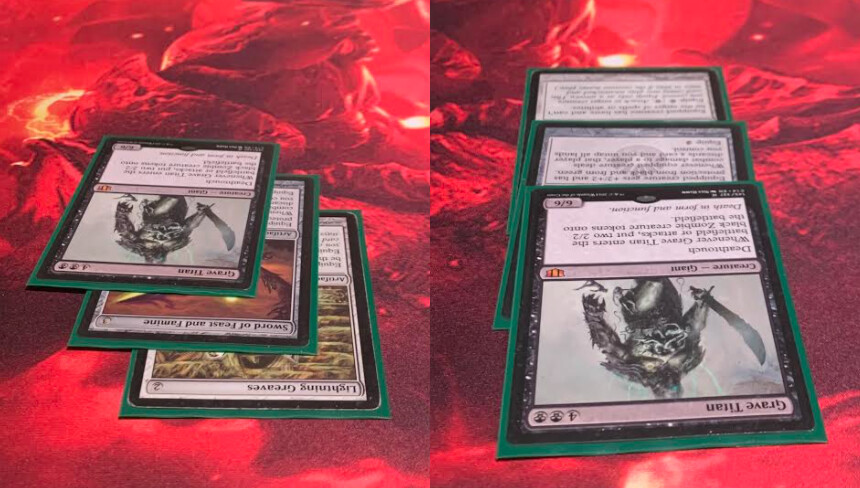 For those of you that do paper magic, how do you equip/enchant your permanents?

For those of you that do paper magic, how do you equip/enchant your permanents?

Always the first way. Only sociopaths and undesirables do it the second way.

Always the first way. Only sociopaths and undesirables do it the second way.

This is obvious on its face, and I’m honestly concerned for the well-being of anyone who thinks differently.

The Magic story writing has been inconsistent over the last few sets. War of the Spark was epic but overly reliant on older lore, Eldraine was great, Theros was practically nonexistent, Ikoria and Kaldheim were mediocre (IMHO). So I wasn’t sure what to expect from Strixhaven. Thus far, I’ve been pleasantly surprised. The main story is decent, though only half-finished so we’ll see where it goes. The two side stories they’ve put out so far are really good, I’ve enjoyed both. Assuming the remaining stories continue in the same vein, this set’s lore is looking like one of the good ones.