Seriously. Is Flappy Goat rigged so you can’t get past the first obstacle, or do I just suck?

I got to 3 so I assure you it is possible. But the frustration of it erased all the other fun I had in this silly little game.

Play it in slo-mo mode (press F on the keyboard) and it’s a lot easier.

I managed to glitch the game so my character was flyiing to the sky (collecting billion points and achievements) escaping the solar system at interstelar velocity. Then somehow I was again on the ground, and my score was 0 or something normal, not the absurd numbers I collected. Super anticlimactic.

I got this game to play it with a cousin, but he was not interested in it at first, or maybe he was stubborn into playing LEGO avengers :P

Who play a mobile game in a TV?

Everyone who ordered an Amazon Fire TV today, including me… 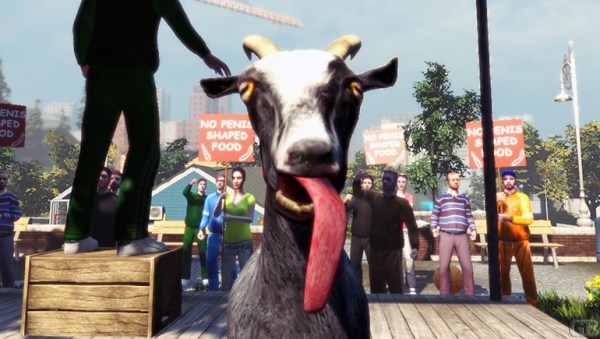 Goat Simulator: How to beat all quests, find all trophies, and unlock all...

Tips to accomplish all quests, unlock every Achievement, as well as the location of all golden goat trophies.

Who play a mobile game in a TV?

Ouya owners trying to feel better about wasting their money.