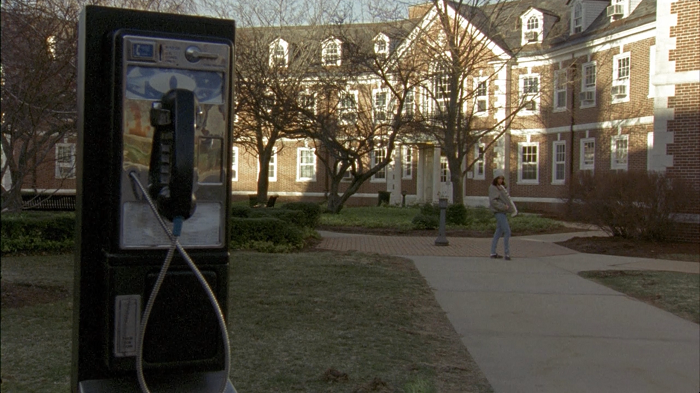 Chris: The great triumph of this bravura bit of filmmaking from American horror auteur Ti West isn't that he almost effortlessly creates a perfect facsimile of an early 1980s horror movie..

" Her every mannerism and facial expression registers everything every second she’s on camera."

Earlier you mentioned when she opened the door to the basement. I love the "no thank you" appraisal she gives in a facial expression before she turns the light back off.

Both had amazing flip-dos, but yeah, Greta's was spectacular. That's a lot of curling iron time.

Thank you for noticing this gem of a movie.. could not agree more that the lead actress in this movie is magnificent and Ti West creates a simple and powerfully tense mood that starts right from the opening credits.

Yup, pretty much everything about this movie is tremendous. You guys nailed it all in the write up. Where has Jocelin Donahue been all my life (and what the heck has she been doing since this?)? The entire cast is fantastic. And Tom Noonan, boy oh boy, you don't make them any creepier than him. He does a great bit in a recent episode of Louie that I couldn't help think of watching his performance again here.

And the dancing sequence...it sticks in my mind evertime I think of this movie. Ti West and Adam Winard have perfected the use of one perfect song for their films. Whether it's One Thing Leads to Another in House of the Devil, or Looking for the Magic in You're Next, or The Knife's Heartbeat's at the start of West's latest, The Sacrament, they just nail it with the music.

I hear the soundtrack for The Guest is equally great, but alas, I can't find the damn movie anywhere.

I could go on forever about this movie, but I'll leave it with one last thing: the face of the devil lady/witch. Holy fuck.

(Is the Innkeepers really any good? I tried to watch it a few times and couldn't get very far into it, am I missing something really great?)

I liked The Innkeepers OK, but thought it paled in comparison to this. On the movie podcast, Tom, Christien, and Kelly savage it pretty badly, and I can't fault any of the stuff they say. It's much more of a YMMV film than this.

It has stuff to appreciate, but yeah, I don't think it works nearly as well in the end. And I'm not as sold on House of the Devil as some, though I did like it. So I can't say as I'd really recommend The Innkeepers on the whole. Certainly not as a horror experience. It almost never reached the point of being frightening to me.

Finally got around to seeing this. Delightfully understated and it burns just right. I quite like that the ratcheting tension was not aimed at the audience but rather at the lead, which is where some films sort of cheat sometimes (e.g. From Beyond, which I did like despite all the jump scares, very much does this).

Weird how a movie thread is in the Games category.