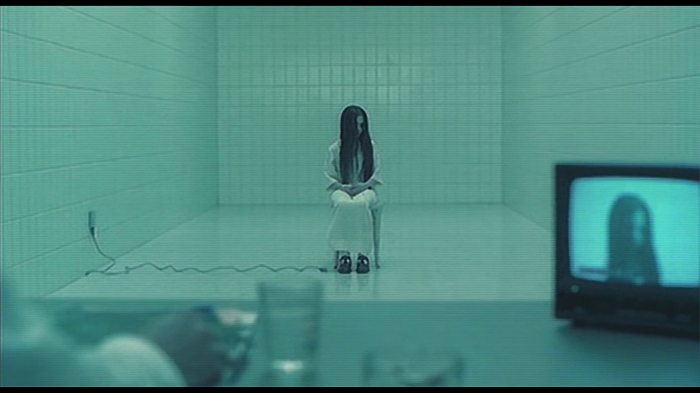 Chris: I need to give you all something, so we'll talk about this movie in just a moment. Let me find it...here we go. This dog-eared thing with the peeling lamination? Yeah, it's my horror movie credibility card. I'm afraid I have to hand that in..

This movie has always had a special place in my heart (considering that my last name is "Ring", I might be biased). I remember first seeing the movie in high school on Saturday night, opening weekend...and then bringing a bunch of friends to see it with me for my second viewing the following Friday night (you know, just in case).
I also saw the American remake and later saw the Japanese original. While I really enjoyed the original, I felt that it took away some of the agency of the main character by having the secondary ghost characters trying to give her hints and such. I admit that some of her inferences (in both movies) and such don't make all that much sense without those hints, but it just didn't work as well for me.

She is ~awesome~ in this film.

BTW the trilogy of books the films are based on are a fantastic read.

Good, someone said it. I was wondering what was going on...

Well. The first two are. I felt like Loop kind of retroactively wrecked the entire series.

Ouch. Too soon on that Seattle PI joke. Maybe it's just that I can see its globe right outside my window. MY REAR WINDOW. This comment started bad and has gotten worse. I guess I just wanted to say that I like The Ring. It's kind of a modern day Poltergiest; a sort of family friendly horror movie. I also like the idea of ghosts using "modern" technology to freak us out (ala Poltergiest). Haunted castles and ancient demons are creepy, but when they invade our safe space we've carved out of science, LOOK OUT. There is no escape.

I blame me for that, actually. I love Naomi Watts a lot, and think she's terrific in this. I realized after we were pretty much complete that we'd not talked about her because we got carried away with other stuff in the piece. I didn't want to go back and force something in there after the fact.

That's the nature of these pieces, for good and bad. It's two or three of us basically sitting around yammering our thoughts at one another, sometimes in stream of consciousness manner. The process makes for a more entertaining, less-calculated read. Sadly it also means that we're prone to realizing the next day that we left out the PERFECT thing to talk about. That's why I'm so thankful for the comments section, where I can mention that Ms. Watts makes her reporter character and motivations quite plausible here.

Sorry for the PI backhand. It was too easy a shot not to take (said the guy with the family who works in print journalism; it's the gallows humor that those still in the biz all seem to have.)

You make a great point, Brian, about the ghost and technology. One of our forum regulars, CL Wheeljack, messaged me a few days ago to tell me his wife studies Japanese culture and folklore. In that folklore, spirits regularly can and do invade, possess, and inhabit inanimate physical objects. That Samarra would be able imprint her thoughts onto videotape is a chilling example of that at work I think.

Yay, the Ring! This means I can tell one of my favorite stories!

I was in college when the Ring came out in theaters. One evening, I came home from classes to find an unlabeled VHS tape sitting outside our door. Looking at the spools, there clearly wasn't that much content on it, so it wasn't a full length movie or anything. Whatever could it be?

I'd seen the Japanese film already at this point, so it surely lost some effectiveness as a result. But still, a very inspired attempt. There's another account of receiving the same tape here: http://thehairpin.com/2011/10/...

Unfortunately, I don't have the tape any more. One of my friends was involved with the anime club at our school, which had a lot of their material on VHS tape. Of course, most students didn't have a VHS player, so they had one of those to borrow along with the tapes. We left the Ring tape in the rental VHS player. I'd like to think it's still floating around unlabeled in the anime club library somewhere.

Another thing that seemed trivial to mention, but which I enjoyed: the fake refrigerator door non-scare here. In that opening sequence, I was trying to remember when everything goes higgledy-piggledy, and then the fridge door is open and I'm all tense and expecting it...and no. It made me wonder if the refrigerator door scare trope is younger than 2002, or if Verbinski was just nodding and winking at it here.

I think it's younger but I probably need to go digging to confirm it. But I loved that he avoided it. The entire opening sequence is drawn out just the right amount, I think.

Not sure if she'd been in anything beforehand, but The Ring is definitely the movie that made me aware of Naomi Watts.

Glad you gave some love to the horse on the ferry scene, Chris! It's easily my favorite "animal senses the supernatural" scene in any horror movie ever. I vividly remember seeing The Ring and how the [email protected]#%$ climax had me practically hyperventilating. I also remember Debbie Harry(!!) was in the audience. I have a soft spot in my heart for big budget horror, probably because I saw Poltergeist at such a tender young age during my horror-puberty years. Naomi Watts followed this up with Mulholland Drive. Back-to-back scream-queen classics.

I will avoid making obvious Videodrome references here...but I'm thinking about them.

Was this the first film to give us the twisted jacob's ladder faces with large black demon eyes?