Who will take one for the team?

I was gonna be playing it anyways :)

You’re the man. Europa 1400: The Guild (what’s the deal with the names anyway, euro vs international?) is one of my favorite games so I’m eagerly awaiting your reports.

Also, what’s the status with The Guild 2? I bought it ages ago, including the Renaissance dlc/expansion but never got around to playing it because a lot of people said it’s a buggy mess.

Same here, its one of my fave games ever. Guild 2 is seemingly better but still to much work to play imho. Fingers crossed Guild 3 will be good. I will find out later and report back!

I was gonna be playing it anyways :) I watched a bit of a Let’s Play, and, other than improved graphics, I’m not seeing anything different from 2. In fairness, I only watched about 15 minutes, so I may not have given it enough time,

Well if it’s 2 and working as designed then that could be a good game. I never found 2 to be stable enough to actually play.

I really hope this turns out well as the first Guild is one of my favourites too. And even the sequel had its moments, eventually.

But there’s no way I’m buying in before this thing is finished as it looks especially early. And yet that release schedule seems extremely optimistic… 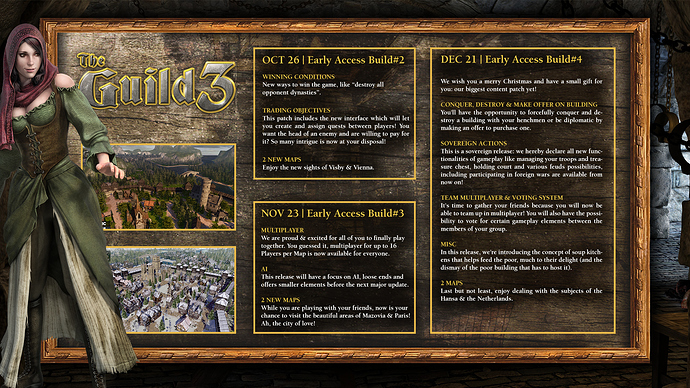 Also, what’s the status with The Guild 2? I bought it ages ago, including the Renaissance dlc/expansion but never got around to playing it because a lot of people said it’s a buggy mess.

But how can the new one be a true The Guild game without being a buggy mess?

haha, thats so true. I mean, LOVE the Guild, but man - its the most buggy games ever. Wasn’t there a lot of ruckus about the first one, distributors who swindled, programmers…head something, that were profilic on the net saying everyone tried to screw them over and so on?

Did anyone, like me, try playing a lot of multiplayer Guild 1400? Talk about buggy! We basically knew we’d never get through a full game, but it was so fun while it lasted, we basically didn’t care. I hope the new one is good, but we’ll just have to see if they understand what made the first so great and the second so mediocre!

Man, I only tried MP Europa 1400 a couple times. It was a blast for a bit - it had a bit of the feel of an Imperialism game - very cutthroat.

Biggest bug I remember was the people you condemned to be burned at the stake weren’t actually killed. Later fixed.

As for guild 2 I think I bought 3-4 expansions (didn’t get pirate one). It’s less buggy than the original. My main complaint was the design - they changed it to be more of an RPG/Sims style where you controlled founder, wife, children all in real time. It was kind of fun to make the eldest son be a murdering thug who waylaid passerby outside the town borders but it was stressful to play in real-time mode.

haha, thats so true. I mean, LOVE the Guild, but man - its the most buggy games ever. Wasn’t there a lot of ruckus about the first one, distributors who swindled, programmers…head something, that were profilic on the net saying everyone tried to screw them over and so on?

JoWood. I was very happy when they went out of business.

I have never played any of the guild series and wondering how this one is? Does anyone know what the price will be when it comes out of EA status?

I’ve read a rather detailed preview / early review piece on the EA version at Gamestar.de. They advise to be wait and see, and think the intended development schedule to full release is quite ambitious. I guess that’s as far as a reasonably fair publication can go for a not yet released product. So I wouldn’t rush to spend money on this until there’s visible progress.

Has anyone played this in the last year? I’ve got a hankering to play a “The Guild” game after listening to Apprentice: Scarlet City on Audible. These games were so unique, I was a big fan of The Guild 2, even though I only played the base game and that was ultra buggy mess.

Looking at the reviews for TG3 it still looks very “early access”, so I’m not sure if I should try that or TG2: renaissance?

Ok I got round to playing the latest version (since the new dev team took over). This is good, really fun actually. I will post a little write up at some point* but till then this play through is pretty good.

*summary: this is really fun for me right now but if you hate the jank then stay away for at least another six months, probably a year.

(since the new dev team took over).

I had no idea this had happened. This is looking good, thanks for posting about it!

Very glad to hear this is shaping up well! The original was like nothing else at the time, and almost revelatory in multiplayer… until it would crash and everything was over. A solid, less janky version (which hopefully this will eventually become?) would be a real delight.