Tommy Tallarico, (yes, that Tommy Tallarico) is the new president of Intellivision Entertainment and the company is getting ready to launch a new version of its retro home game console…

I didn’t exactly remember who Tommy Tallarico was (I KNOW, right??), so I looked up his bona fides on Wikipedia, and I couldn’t not be struck by the last of these facts about his personal life:

Besides video games and music, Tallarico is an avid baseball and Spider-Man fan, and collects balsamic vinegar.

Good balsamic vinegar is amazing, it’s a shame we don’t use it more. So I totally respect his niche collection, and would love to sample some of his finest.

I remember this guy from the game review show he did with another guy on G4. They both seemed like goofballs but in a good way. But I feel zero nostalgia for the Intellivision system, so eh.

It had a Dungeons and Dragons game I’m fond of. Probably not worth buying this remake for, and probably won’t be included anyway, but it was cool in the day.

Tommy’s 007 soundtrack was amazing. Tomorrow never dies I think. Still have one of those takes in my game geek mp3 rotation.

I recall two AD&D branded games. The first was Cloudy Mountain, which didn’t seem to have much to do with Dungeons and Dragons. The second was Treasure of Tarmin, which was the first (faux) 3D dungeon crawl that I ever played: 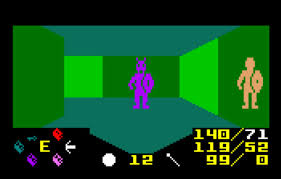 We had the other one however I thought it was just called Advanced Dungeons & Dragons as I don’t remember anything about cloudy mountains. Anyway, it was awesome, one of my favorite Intellivision games.

You have to be a bit older I think, to appreciate the Intellivision. I had one and liked the voice module with a B-17 bomber game. When you dropped on the wrong location, a voice with a really heavy southern accent would admonish you, “that wuz nawt the tarrget”. Good times.

Or you were on the other side of the ideological divide - before PlayStation vs Xbox, before Sega vs Nintendo, there was Atari vs Intellivision. And you had to pick a side. Unless you had both, in which case you were a rich kid and I would have spit at you.

I used to bomb England regularly just to hear that.

Haha, the subject is Intellivision… leave the class warfare in P&R.

I don’t remember having to pick a side when it came to those systems. Some people had one or the other and we’d go play whatever system was available to us depending on where we were. I do remember not liking the George Plimpton ads where he declared the Intellivision “clearly superior”. My group loved them both.

Had to look it up now so here it is:

Can’t seem to find a “not on target” example though. :(

Well you and your friends were clearly hippies. That’s not how you do a console war.

Tron: Deadly Discs was awesome on the Intellivison. It also had the best hockey game by far, for years. It was a controller killer for that crummy intellivision disc controller though. It had the best sports games in general for that era. There was also a pretty great top-down racing game for it.

I had the 2600, but actually preferred my buddy’s intellivision - we had a years long after school hockey rivalry.

You know what stands out to me is the sounds of the Intellivison games. Like when you mention Tron the first thing that comes to mind is the sound the game made when you through a disc and hit one of the robot guys in the eye. Also on the D&D game I can still remember the growling sound you could hear as you got closer to the monster in the dungeon.

They came out with a console a little while back preloaded with a handful of games. A lot of the games are actually still a lot of fun like Night Stalker and Astrosmash. I actually played Astrosmash for like 2 hours straight and set my all time high score but the little side buttons killed my fingers by the time I was done.

If they do come out with a new console I wouldn’t be opposed to them maybe making those controllers a little more user friendly. Maybe round the corners of the side buttons off for starters.

Are they going to pay me $200 to use those utterly terrible gamepads and play 40 year old bleep & blorp games?