I’ve gone through a few iterations on hotas setups.

Original saiteks were okay. I mean okay saiteks = kinda shit, but they functioned. Post logitech they are horrible.

Like upsettingly bad. Flimsy, and awful, and you are better off having nothing. I’ve bough and returned 2 diff sets. X52 as a stopgap that was so flimsy i didn’t even unpack it, and an x56 for my son that was so bad it made him cry from frustration.

Curently I have 2 different setups. One for me, one for my son. Both use the VKB Gladiator which is great. Priced well, customizable and good support. I thought it was mushy, but in actual use it’s just stable.

2 diff throttles. First is a virpil CM3 which I use. It’s a great piece of hardware. Solid, well built. Software is decent. It’s vague, so no 1:1 buttons to hardware.

My son has a Winwing orion throttle with the f18 handle. I LOVE this one. It’s goofy and overly specific and just fun to flip buttons on. Software isn’t bad per-se, but it’s not documented. Has some good binding stuff for dcs.

I also have a set of the vkb rudder pedals which are nice, but I haven’t used them much.

For future purchases, I’m going to probably go with winwing throttles and VKB sticks. I’m really impressed with VKB (and their customer service after i busted a cable). Winwing is just a hoot. Very much ticks the “lets’ pretend” buttons with the hardware.

For any Canadians looking for the cheapest one, the Logitech one goes on sale for $39.99 on Amazon Canada every few months, down from $49.99.

My son has a Winwing orion throttle with the f18 handle. I LOVE this one. It’s goofy and overly specific and just fun to flip buttons on. Software isn’t bad per-se, but it’s not documented. Has some good binding stuff for dcs.

Any issues with the Winwing throttle? It looks like the perfect replacement for my old Saitek throttle.

Excepting it being about 20 times the price of your Saitek, I’d be curious to know what issues it’d have then ;D

Yeah, when I said replacement I meant upgrade, so I expect to pay more. It’s $235 in their store not including shipping, so that’s still cheaper than a TM Warthog throttle and much cheaper than a Virpil throttle.

I’ve heard of Winwing before, but the last time I checked their product lineup the only throttle was a beast of a device: Anyone have a towel? I seem to be drooling uncontrollably.

Just to be clear, I’m not looking at the one in the picture above, it’s $650 here. The one I’m looking at is this: It’s also out of stock (of course), but is available for backorder I think.

I can visually feel the proper resistance of that throttle.

I’d lend you my towel but… you know.

Aah, okie. I was about to throw a revolution.
(I like the one you posted before a lot though, cold war kids and their glowing mechanical titties…)

I was looking for an article I had read with some extra extravaganza (probably an oxymoron, but I get easily excited with sexy gaming hardware): 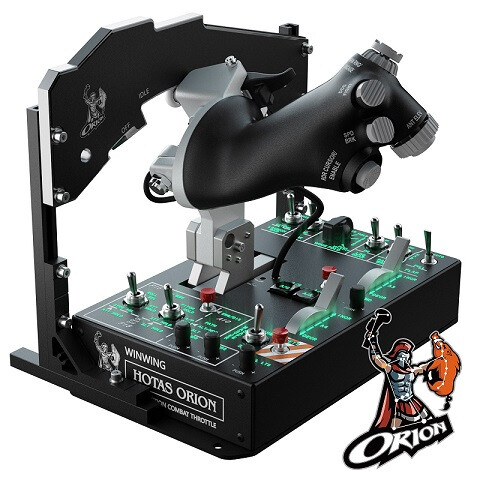 This is supposed to represent the actual physical resistance of the various errm… triggers of an original throttle.

I’d take either one and not even plug it in. Just play with it.

I confess to having doing that once upon a time - and relatively more recently with the silly Steel Battalion stick.
I think a driver was in the work for the Steel Battalion controller actually, many many years ago, but I guess that project flubbed, or we’d have pictures of virtual cockpits featuring that hardware everywhere.

Nope. It’s super solid. Arma3 hates it, but it hates everything

Thanks, I went ahead and ordered one already.

In fact the handle arrived today. The base unit, I have no idea where that is. Fedex tracking shows it leaving the facility in Chengdu, then stops. I really wish Winwing would have shipped them together as a single package. Probably would have saved on shipping costs too.

Disappointing to hear Arma 3 has problems. That’s one of the games where I wanted to use it. Not a deal-breaker though.

The base unit, I have no idea where that is.

Turns out it was caught up in the backlog of goods coming from China. Finally arrived yesterday, just finished assembling the throttle this morning.

Between the time I ordered and the time it shipped Winwing released version 2 of their Orion throttle, so that’s what I received. One of the big changes is an adjustable idle/afterburner detent, which seems like a neat feature, but the moving parts there are plastic on plastic so I’ve ordered some synthetic lubricant to preserve them and make them operate more smoothly.

It’s a little bigger than I expected, but that’s not a problem. Fits nicely on my desk. 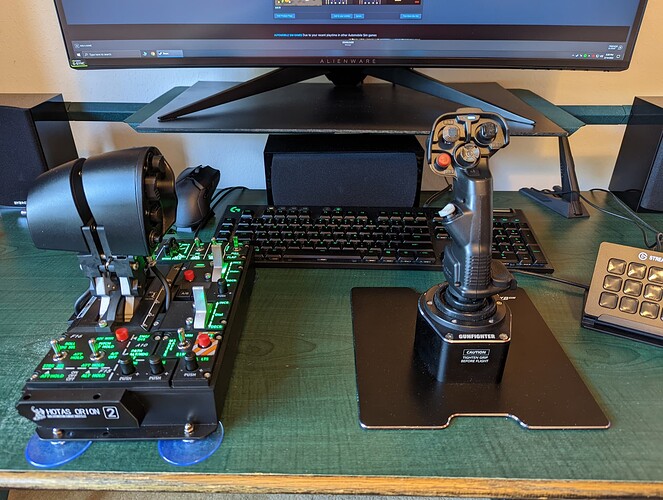 So what do you fly with those godly things? DCS F-18?

Seriously, I do chew on the edges of DCS from time to time. I need to make more of an effort to get into it in earnest.

Mostly MSFS, IL-2 BoX, Elite Dangerous. I don’t play ARMA 3 much anymore, but I tried it over the weekend and the throttle seems to work ok. I’ll happily use it in other games where I can justify a HOTAS setup, even if it’s overkill. (Haven’t actually tried Ace Combat 7 though)