So a couple of folk picked this up recently in the Steam Summer Sale and I figured it would be better to have a dedicated thread for any discussion. A huge part of the experience is discovery so be generous with your spoiler tags! 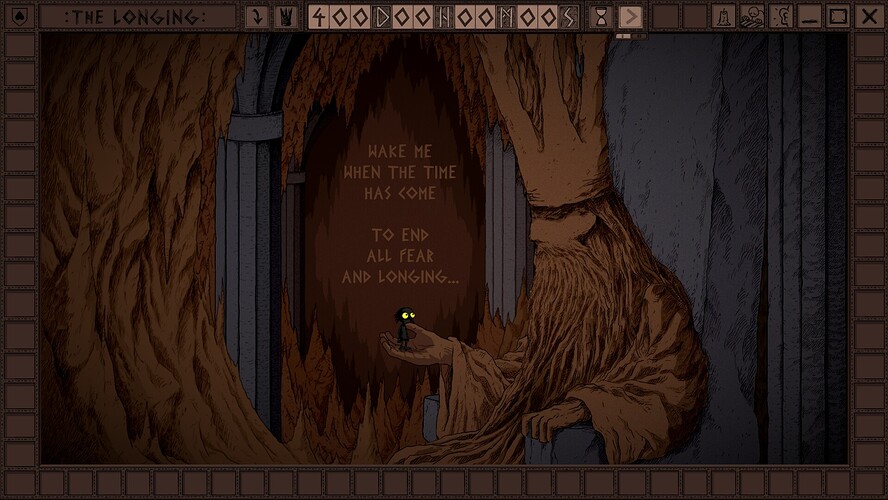 In The Longing you play as a shade, deep, deep underground, whose task is to wake the king from his slumber after 400 days so that he can end all fear and longing. That’s in real-time. You’re also alone and told not to leave the caves.

It’s crazy to me that The Longing was released in early March 2020, around the same time we were all going into lockdown, into our own caves with our own fears and longings.

As I mentioned in the Steam Summer Sale thread: The Longing isn’t for everyone but it was totally for me. I wrote this about it:

Singular, beautiful and probably one of my all-time favourites now.

The Longing put the adventure back in ‘adventure game’ for me, not just because it’s so mysterious and strange, but because it harks back to a time when you’d spend months with one single adventure game, trying to work out what to do to progress. In The Longing, however, you don’t get ‘stuck’ so much as you just have to… wait, for things to happen, whether it’s for some moss to grow or indeed to wake the king after 400 days.

Although it’s described as an ‘idle game’ mixed with an adventure game, I think that term undermines just how engaged you have to be to uncover its many secrets, and that’s not to say you have to be watching the game constantly either–the game quite happily ticks along when you exit.

It’s not for the impatient or for those wanting something to do all the time. It’s slow, meditative and rewards the observant. There are some tough, introspective decisions to make here and while the length of the game makes these heavier and more final (you get one persistent save), The Longing has plenty of clues if you’re paying attention.

It must be said too, that the game’s muted but detailed and evocative visuals are complemented by an incredibly atmospheric (and unique) dungeon synth soundtrack. It all works together so well and I’ll be listening to it for a long time to come.

I’m sad it’s all over now, as is often the case when you finish something so absorbing, but the longing had to end.

Gotta admit. I grabbed it after reading your posts about it. I generally don’t like its sort of art style but it really looks great once I jumped in. Since I know it’s a slow burn going down in I’m not worried about always doing something. I thought it was cool to watch it take a minute or so to accomplish something in my room. I do wonder how I’ll feel as im down to under 100 days and the end is in sight.

No steam page link?? The injustice!

Thanks for this thread, @geggis. I’m glad you made it instead of just leaving your comments in one of those godawful catch-all threads where conversations go to get lost and die. I especially love how you didn’t just describe the game, but described your experience with it. I’ve downloaded The Longing and I’m not sure when I’ll ever get to it, but at least you’ve put it on my radar.

Although I’m not sure how I feel about its abuse of colons. You can’t just put a colon at the beginning and end of your game’s name. That simply isn’t done!

Alright, I have to know three spoilery things before I continue:

Because if the answers aren’t no, yes, yes I’m probably going to have to refund it. Way too slow for my tastes. And I want to like it, I’m a willing longinger.

I’m not sure when I’ll ever get to it

It plays itself when you’re not even around!

Way too slow for my tastes.

My impression of everything I’ve read about this game is that slow is the point. It’s one reason I suspect it’s not for me, though I can totally get that it would be very much for other folks (it’s certainly very different, which at least makes it interesting to read about).

Your first answer is “yes”

I went through stages and looking back I’m kind of amazed how many feelings such a quiet experience managed to provoke. Ennui is obviously one of the ‘main’ feelings but that’s kind of the negative space of the game, if you like.

No steam page link?? The injustice!

I try not to link just to Steam when it’s available on other systems and storefronts! :-)

There is a location bookmarking system so if you go somewhere you can bookmark it and tell the shade to make his way there at the press of a button. He’ll still have to walk so it’ll take time, but there’s no rush. He’ll walk to places even when the game isn’t running too.

My impression of everything I’ve read about this game is that slow is the point.

Yeah, it totally is. I think if you just had to wait 7 days and the shade was faster and everything was just snappier, you’d be losing an emotional dimension that only emerges when you’ve spent a long time waiting and wandering those caves and halls. Not to mention, folk would happily replay it to wring out the experience. As it stands, the length, pace and single save of The Longing means for 99% of people, they get one shot at it, which in turn gives the experience (and your decisions) more weight.

It’s also worth mentioning that I don’t think The Longing wastes your time! Things like location bookmarking and the game still ticking when not running make the game so much more accessible, but it’s more that the time you spend with it, even when you’re not doing much, still matters in the broader design or intent of the experience. I love that.

Day 397 and I booted this up to see what’s what. I’ve done the random walking thing for about a half hour I think yesterday. Then sent my shade home. I sort of watched him as he walked home, but he didn’t get as far as I’d hoped so today I went out to my farthest saved location and after a little while of finding a whole lot of nothing (as usual) I stumbled across a nice little thing to pick up and then at the next location found a few very nice things I could pick up. And a new sort of cave area. Don’t think anything above could be spoiler so I’m not going into any more detail. Except to say I’m a little bummed I need more of some things I’ve already found and still need to figure out how to make and/or find some other things from the home area.

To those that have played this already, I’m just sort of exploring and picking up anything I stumble across (not much so are really until today). Just want to make sure I’m not missing some obvious toggle or something.

Still not sure I’m ‘enjoying’ it yet. But thank God I found something new today, because I was seriously getting a little annoyed with the ‘whole lotta nothing’ vibe and very similar locations until today. So now it’s piqued my interest to the point I’m glad I picked it up.

I am really loving this so far and think it will probably remain among my favorite game experiences for a long time, although I am not that far into the big four oh oh. It was on my radar, but big thanks to @geggis for pushing it back to the top of my mind and persuading me to dive in. I can see why others would be repelled or annoyed by it; you really have to be into the whole “games as experience” thing, I think. The aforementioned push caught me at a great time, when I’m more interested in games where you don’t shoot/kill things so much. Too bad Ebert didn’t live to play this one.

Oh, I’m so happy to hear that! Yeah, it’s definitely not something I would recommend to most folk, but if you’re anything like me then it’s a rare treat. 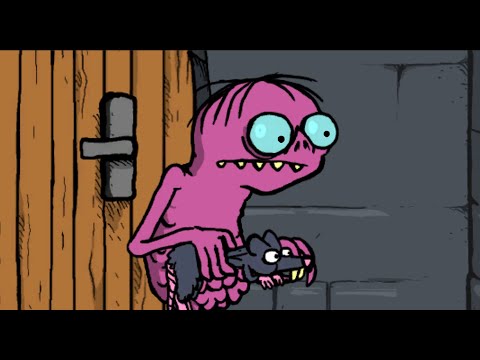 Here’s the first teaser for our next, monstrously BIG game!

It plays itself when you’re not even around!

I bought it expecting this, but as far as I could tell, I had to move the little guy around myself, and I just wasn’t willing to invest that much.

I was hoping for a throwback to idle games from the 1990s where you’d jump in and mess around for a bit, then leave and be surprised by what had happened when you opened it back up.

He’ll keep doing things he was doing when you turn it off, including walking places if you’ve set h a waypoint.

He’ll keep doing things he was doing when you turn it off, including walking places if you’ve set h a waypoint.

Yeah, that’s what I thought.

I think I made him read Nietzsche, and then I ended up refunding. I couldn’t picture spending all that time figuring stuff out and ordering him to do everything.