Saw it the other day. I’m just very happy that there seems to be a new willingness to invest substantial money into this kind of film; between The Green Knight, The Last Duel and this, the last 12 months have been very good for fans of fantasy / historiy-ish type movies!

That said, I was very suprised by how straightforward the story is, especially coming from Eggers. There is very little character development to be had, and the story goes more or less 100% into the direction one would expect after having seen the first 20 minutes. Also the movie hit a bit of a snag for me in the middle, where very little is done to actualy move the plot forward.

That said, the images and the sound were amazing, many scenes were shot on location and I am happy to have seen this film in a movie theater :) 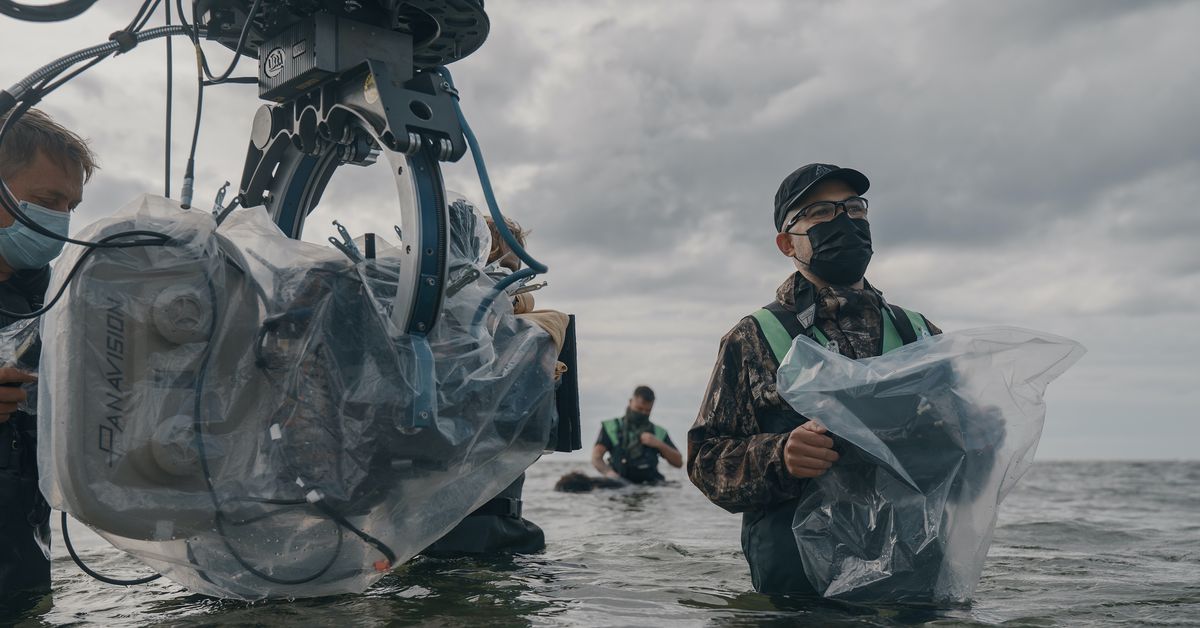 The Northman’s Robert Eggers on using CG: ‘I whip myself every night’

No, Alexander Skarsgård didn’t catch a spear and throw it back in The Northman — but Eggers says that’s not ‘sinful’

The question of CG in The Northman is only relevant because so much of the film was done practically. Eggers prefers to work with natural light when he can, and to build entire villages where his actors and cameras can explore at will. He used a single camera throughout the film, rather than the traditional multi-camera setups that cover all angles of a scene, because that style feels more focused and real. The four-minute single-shot Viking raid in the film was meticulously planned and carried out without hidden edits. Skarsgård wore a single pair of boots throughout shooting, and the film’s designer hand-repaired them when they were damaged. In a village where lines of fish were hung up to dry, set decorator Niamh Coulter used real fish, rather than plastic mockups: “The stench was absolutely authentic,” Coulter said about the handmade sets.

Bolding mine. Nice. A lot of single-shot action scenes in movies nowadays feature a ton of cuts hidden with CG blending.

I liked The Northman, though not as much as The Witch or The Lighthouse (though The Lighthouse is probably the one I’m least likely to re-watch). Lighthouse was insane in a captivating way, with amazing performances. Witch had such a feeling of dread and an amazing atmosphere. The Northman had elements of both, and at times was every bit a match for those impressions. And Eggers’ cinematography was as gorgeous as ever when it comes to these almost alien landscapes of bleak isolation.

But the action in The Northman was hit or miss for me. Sometimes Eggers’ style gave a unique perspective to action (the shot of the river boats passing by that transitions into a shot on the river boats, the ascent of the fortress wall). But other times, yeah, maybe it was the actual fight choreography that didn’t quite work for me, or even Skarsgård himself. Sometimes he felt like a hulking, relentless, force of nature as he methodically, unflinchingly advanced through a battle. But other times the same style didn’t work and instead he felt a little stiff and slow, marching, shoulders hunched, from one mark to the next.

Also sometimes he just looked like a young Jeff Daniels.

It liked the combination of a very “gritty, realistic” portrayal of viking life and a very straightforward embrace of norse mythology. It made me appreciate having played God of War (2018) and made me want to play Assassin’s Creed Valhalla!

Anya Taylor-Joy gave a very Anya Taylor-Joy performance, and Björk probably just showed up on set like that and the wardrobe person shrugged and walked away.

In all three movies Eggers incorporates elements of the fantastic because that’s how his characters’ minds work, but in the previous films the audience wasn’t asked to share in the suspension of disbelief.

Hard disagree. In The Witch the supernatural elements are clearly real. They do come into the film towards the last third, unlike here, where they are present from the beginning. So there’s that.

I loved this. Story might be simpler (maybe? Perhaps just more distant and harder to connect with?), but it does take you “really” there.

I liked it the more it went on. It’s like the origins movie to Shakespeares Hamlet. And it had really interesting character arcs… I did not recognize Willem Dafoe, who was he? The witchdoctor I could imagine…

It is really asking good questions about keeping a long lasting hatred, about vengeance, about self delusions.

Nice to see Nicole Kidman again, and Claes Bang was great like always.

For my taste, it felt a little too raw. For example I liked The Green Knight more, because it was more artificial and beautiful to watch.

The Northman has a lot of beautiful images, too … but a really rough and raw feeling that is harder to enjoy.

I liked it the more it went on. It’s like the origins movie to Shakespeares Hamlet.

Well, as someone mentioned earlier, it is basically based off the Nordic legend of Amled from the Gesta Danorum of Saxo Grammaticus, which is the original inspiration for Shakespeares Hamlet.

Whoa that was quick! 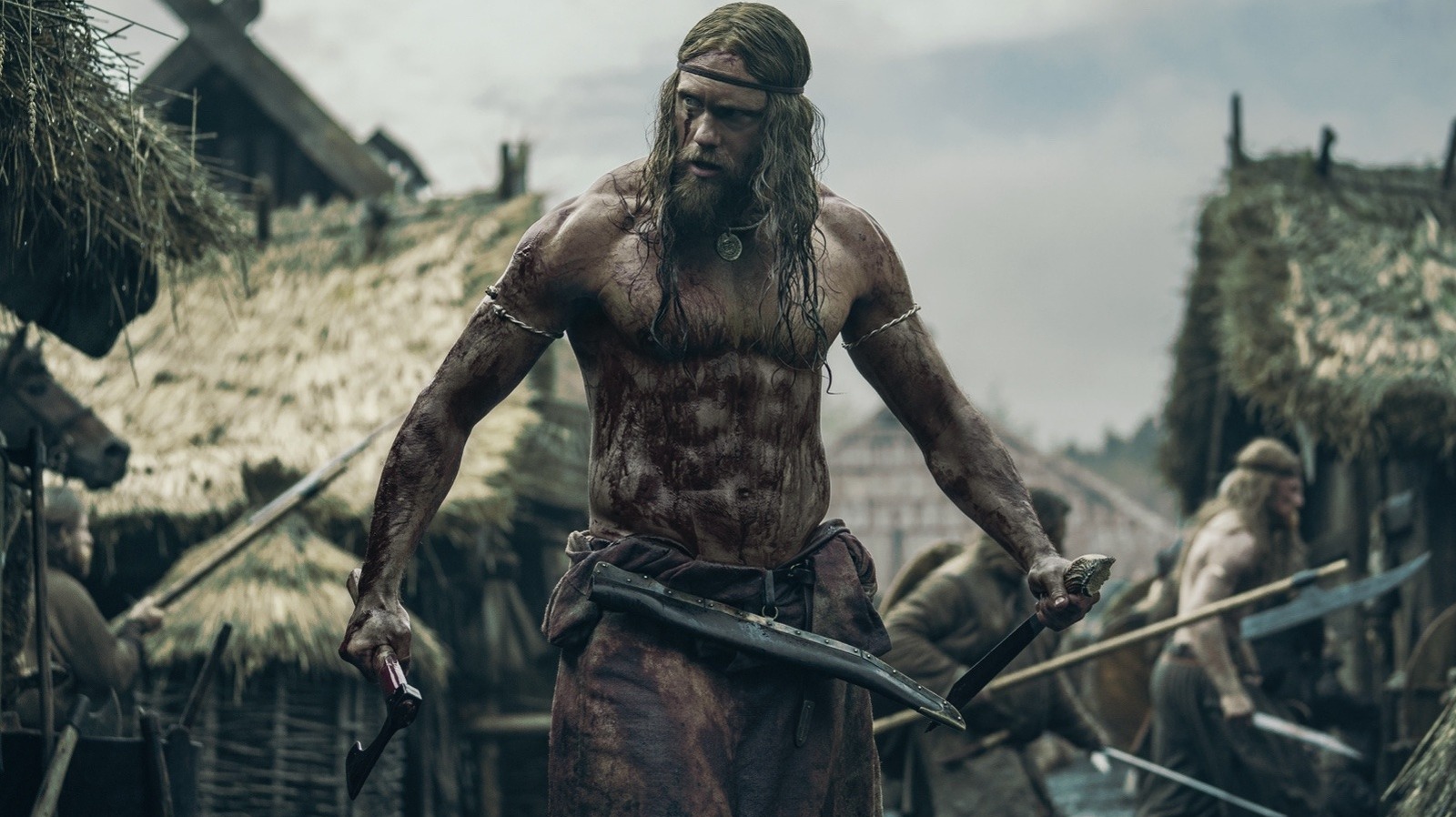 Here's When You Can Watch The Northman At Home - /Film

The Northman is coming to VOD very soon.

Yeah, it didn’t really do numbers at the box office. I would assume the quick move to VOD is to help make back some of that money.

Yeah, it didn’t really do numbers at the box office.

Unfortunately, it seems to be a bomb at the box. It’s made about $51 million worldwide, but the budget had ballooned to around $80 million before marketing costs, so it’s not a financial hit at all.

Well, as someone mentioned earlier, it is basically based off the Nordic legend of Amled from the Gesta Danorum of Saxo Grammaticus, which is the original inspiration for Shakespeares Hamlet.

Only the plot has nothing to do with the stated plot of the original Nordic legend, per the Wikipedia article at least.

Guess it depends on what one considers the core of the plot (I guess it doesn’t include the “insanity” aspect in any major way, but beyond that I think it has the core beats). I don’t think this is much further removed from the Nordic antecedent than Shakespeares version. In some ways, I feel it is closer (the glorification of violence, for instance). But that’s just a point of view, YMMV.

I liked that he named his magic sword “Mr Ax”

I just watched it. I liked it, but a bit less than his two previous films (then again, I liked those two a lot).

As it has been said many time, the story is a very straightforward revenge story, not a lot of character development either… but I’d say even more, the entire story is an excuse here.
The film feels as it has been done because the author wanted to do a ‘authentic’ viking film. That, together the cinematography, is the main dish here, the story is more in the 3rd or 4th place.

A funny thing is how I remember reading some comments re-contextualizing the film under modern optics (i.e toxic masculinity). Googling it up, I see few articles with the same idea 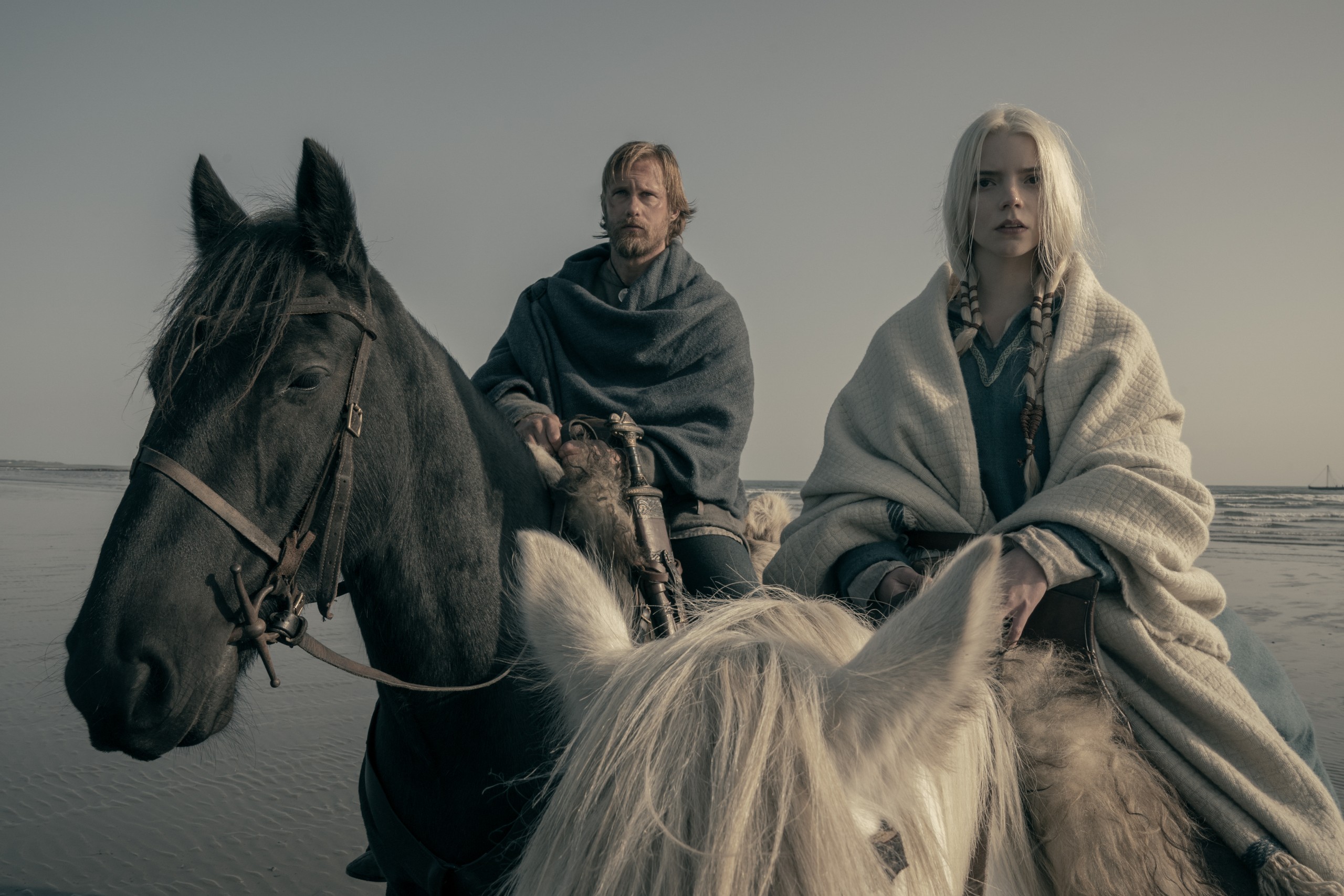 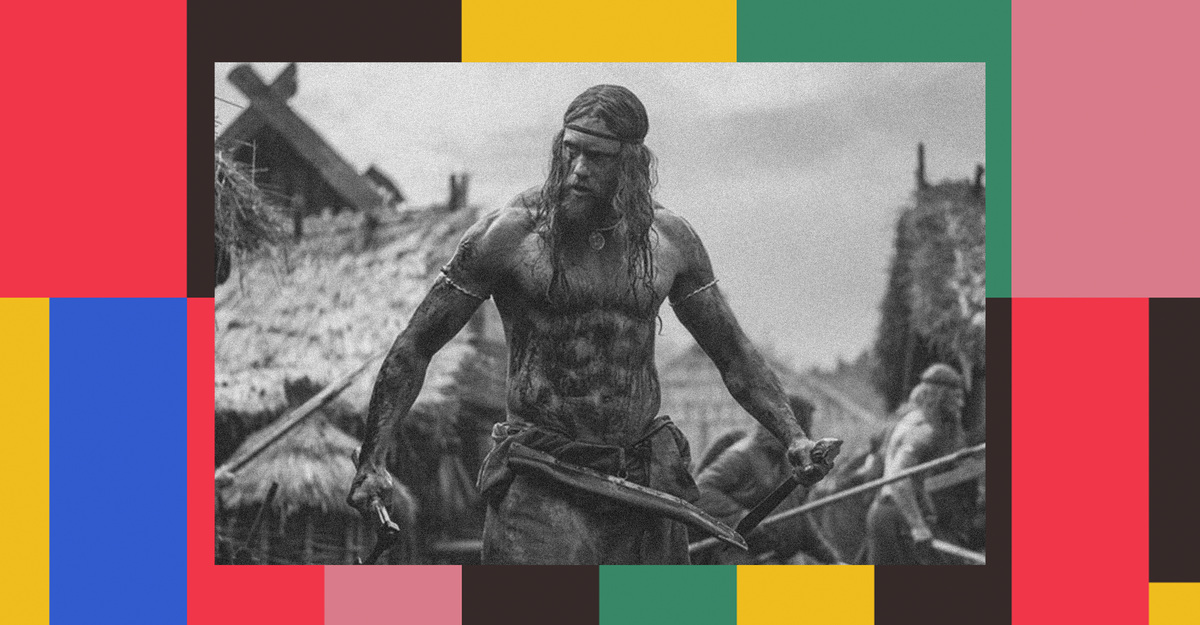 How the brutal Viking blockbuster uses a millennia-old tale to undermine the toxic masculinity of myth. 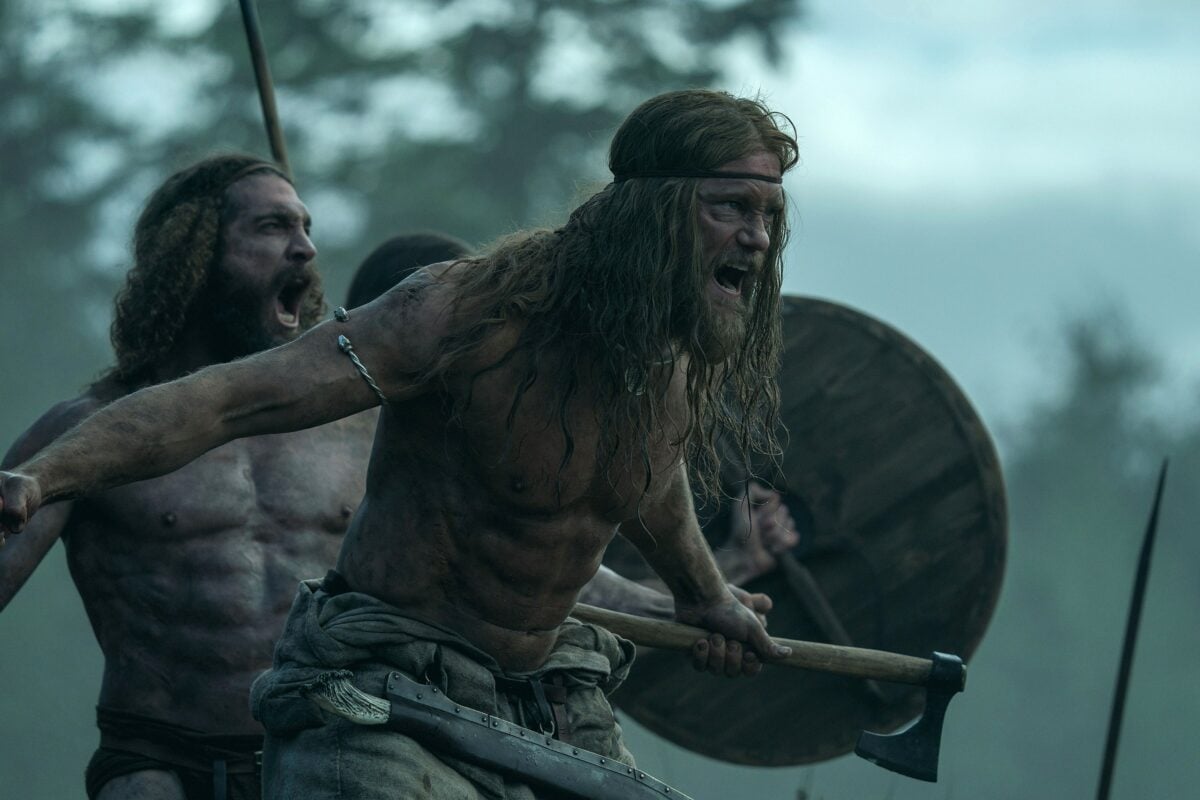 The Trope is the Point: How The Northman Uses Hamlet to Critique Traditional...

A deep dive into tropes, archetypes, why they are useful, and an examination of how these tropes work to critique masculinity in Robert Egger's The Northman.

The thing is, in reality, this story occurs not in the real world, but in the mythical world where ‘vikings were right’: it is realistic historically speaking, but in addition magic and gods exist, as prophecies, curses, etc. Under that paradigm, the protagonist actions are pretty logical: of course you have to avenge your father to save your honor as a man, and that way reach VALHÖLL upon death. This is a world where that afterlife exists. Doh.

The Medievalist’s review said the original story it is based on is “…less violent and more complex”. Sounds like they got the setting right, but then went over the top on the violence part of the story. 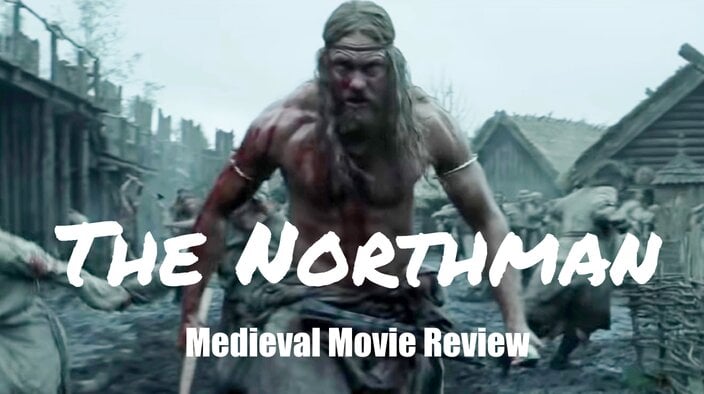 Robert Eggers’ take on the Norse tale of Prince Amleth may offer movie-goers some impressive visuals and historically-accurate details, but ultimately it is another bleak and bloody view of the Vikings.

Time for silly complaints. The story can be simple, but even then, I’d like that in that simplicity (that I accept as is) it could be more… believable. The idea of feigning to be a slave and hiding in a ship of slaves is so silly. Why not go buy a passage, saying you are from Iceland? Why not present himself as a warrior for hire to the king? There has to be many other alternatives.
Many other dumb scenes follow from that decision. When they examine the slaves and they consider them all unworthy and weak until he shouts like a beast, wtf, the man is clearly a big hunk of meat, bigger than most of your guards, who could think that he won’t serve as a slave? are you blind?

A couple weeks ago, I did a presentation called History and Spectacle in the Films of Robert Eggers at our local arthouse theater. I had fun doing a deep dive into the film and all the interviews and articles surrounding its release.

This excerpt from a Smithsonian Magazine article was probably the most enlightening quote I found.

I thought that was a pretty interesting storytelling approach that helped me look past the ways the film wasn’t conventionally satisfying to our modern sensibilities. Between that and Eggers’s approach to dialogue, it’s hard to believe they gambled so much money on this film. It’s an uneven viewing experience but it has some genuinely extraordinary moments.

Woah, this is already streaming on Peacock. Heads up!

Finally saw it on Peacock.

Cons: it’s … pretty basic for an Eggers film? It’s literally Hamlet-as-revenge-action-movie with the philosophizing taken out.

Re: that Smithsonian quote. I get what they’re saying, and it’s on point regarding the way the supernatural flits in and out of the story, which does sometimes happen in the sagas. But the actual Icelandic sagas are way more like The Sopranos and way less like an 80s action movie - that is, the sagas are way more lengthy, lumpy tales about quirky humans with idiosyncrasies and complex histories behind their violence, and way less about storytelling archetypes with gleaming muscles and perfect teeth executing a simple and well-structured five-act plot.

The biggest shock was the end, where I expected Eggers to make the point that what was waiting in the glorious warriors’ Valhalla our hero imagined was … more brutality and savagery like we saw in the first two acts of the movie. Going on for eternity. That seemed more, well, Eggers-like, and also true to the lore. But instead we got a traditional Hollywood/Christian style “go into the light” afterlife.

Still, it’s perfectly solid for Hamlet*-as-action-film and it has amazing visuals. But I liked The Witch and The Lighthouse way more.

*I lol’d at the “Yorick’s skull” and “hiding behind an arras” scenes.