I’m having some trouble really pinning this down. It’s something I absolutely love, but am not really sure how to explain it.

The best examples I have for this are True Detective, Zodiac, The Red Riding Trilogy - In the Year of Our Lord 1974, 1980, 1983 . . . you might be able to stretch it to Seven. These are stories that have a very specific feel to them, where there’s a weight around all the scenes, as it pulls all of the characters down into the muck, destroying all their lives in the process until the revelatory ending.

Are there more movies/series like these? Am I crazy or is there a specific sub-genre I can look up to get more of these?

On a side note, if you check out the amazing Red Riding Trilogy, I generally relate them to the Dark Knight Trilogy, in that the best story is the middle film (1980), whereas the actual story is in the first and last films.

A bunch of noir movies end with the obsessed main character torn to shreds. Many times there is a femme fatale involved. Not all of them, every noir trope has exceptions. Exceptions even for basics like, is it in color or B&W? Is there a crime involved, even? Hitchcock movies, too, might not technically be noir, but noir wasn’t a term used by noir filmmakers. It was coined by French movie buffs years after (many of) the fact(s).

These are classics, so you’ve probably seen them already, and some skirt the noir line into other genres, but…

You’re right. It might just be noir, and the neo-noir spin off. As you said, there’s a lot of exceptions and inclusions that makes noir such a mercurial genre.

For me, this feeling is what made True Detective so mesmerizing. It was interesting to see an interview recently where, I believe it was Nic Pizzolatto, said he had no idea why people were so into True Detective, that it was simply two detectives in a car who didn’t like each other. He questioned what was so original about that? I personally have to disagree, that it was the mood.

Yeah, you’ve basically described the archetypal noir story. The (usually a flawed anti-)hero investigates a dark secret, opens a can of worms, usually destroying the hero or someone he or she loves in the process.

Djsc’s list is a good place to start. More recent examples to check out: obviously Twin Peaks and Mulholland Drive from Lynch. Movies like Brick, Memento, No Country For Old Men and Drive all have noir-ish elements with doomed heroes.

Brick was so good.

…these also have the distinction of having some solid '80s T&A.

I found this on the web back in the day. Per the credits at the bottom, it’s courtesy of Adam Frost and Melanie Patrick, see? 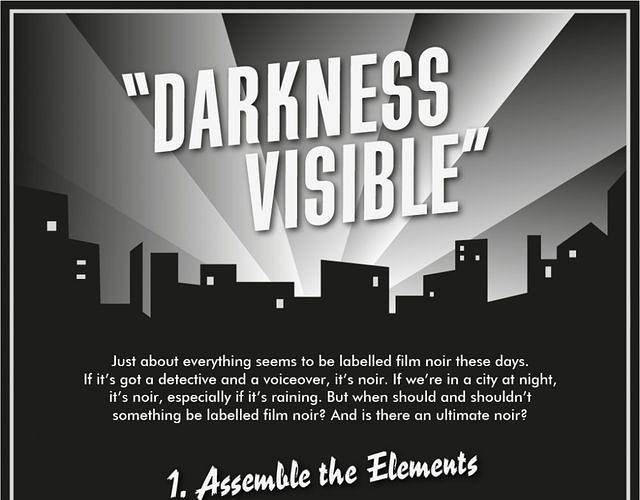 One great, recent example is the TV show The Killing, now on Netflix. Three seasons about how a lead detective gets so obsessive about solving a crime, she destroys her own life.

Just saw Wind River, and I think the film might fit here. It was very well done, but a hard watch.

Sorry I don’t have visual media to add to the list, but the description reminded me of two good books in case anyone is interested:
The New York Trilogy by Paul Auster (Fiction)
Homicide: A year on the killing streets by David Simon (Nonfiction)

The difference is the feel and tone. I wouldn’t call Twin Peaks a moody piece that pushes down on you. It takes the Noir tone and switches it for quirky moments and a lot of crying. While I love Brick, I don’t get that same feeling as I do watching the beat down of Zodiac. I need to rewatch it.

Drive near the end starts to get that feel, but it is only after he’s lost Carey Mulligan.

While this has switched to a Noir discussion, most of these examples (excluding the classics because I’ve only seen Double Indemnity, Chinatown, and Rope) don’t have that oppressive feeling I’m looking for. Part of the reason it’s so hard to describe.

I’ll have to check it out. I just started Broadchurch, while actually has the feeling, but also seems to be like a serious version of Twin Peaks. How does the Killing live up to it?

I love this and want it as a poster, damnit.

A Simple Plan
Irreversible
Requiem for a Dream (not really a crime movie per se, but fits your parameters)

I watched the first season of Broadchurch. That felt a little more standard to me, in that it hits the expected points. Rogue detective wants to solve the case, but everyone else is working against him. Police commissioner wants him to take the easy way out, but he won’t. The case winds up relating to his past in some way that compromises him. And so on. We’ve seen that story so many times.

The Killing takes a somewhat different tact that I haven’t seen done before. Here the detective blames herself if there are loose threads. She needs to pick at them. She is obsessive in every sense of the word. She makes piles of bad life decisions to enable this compulsion she has. Among them, she tells the victim’s family things about the work in progress, and that causes all kinds of secondary problems.

I could be reading more into your use of the word “obsessive” in the topic title, but I think The Killing is exactly what you’re after.

(It’s actually based on a Danish TV show called Forbrydelsen, but I haven’t seen that one. I’d like to.)

No, I think you hit it clear on the head. I’m about to start it. I’ll let you know if the feeling hits me while watching it. But damn, awesome way of explaining the character. Got me excited.