The Ringer’s The Watch podcast did a segment on the first few episodes of this today, and they were highly enthusiastic. Now they tend to be a little excitable so I’m not considering that the canonical take. But considering how much I love Bridges and how he recently came pretty close to death, this might be his last thing. So, I’ll be watching.

It’s on my radar for sure!

I didn’t even know he had been ill. 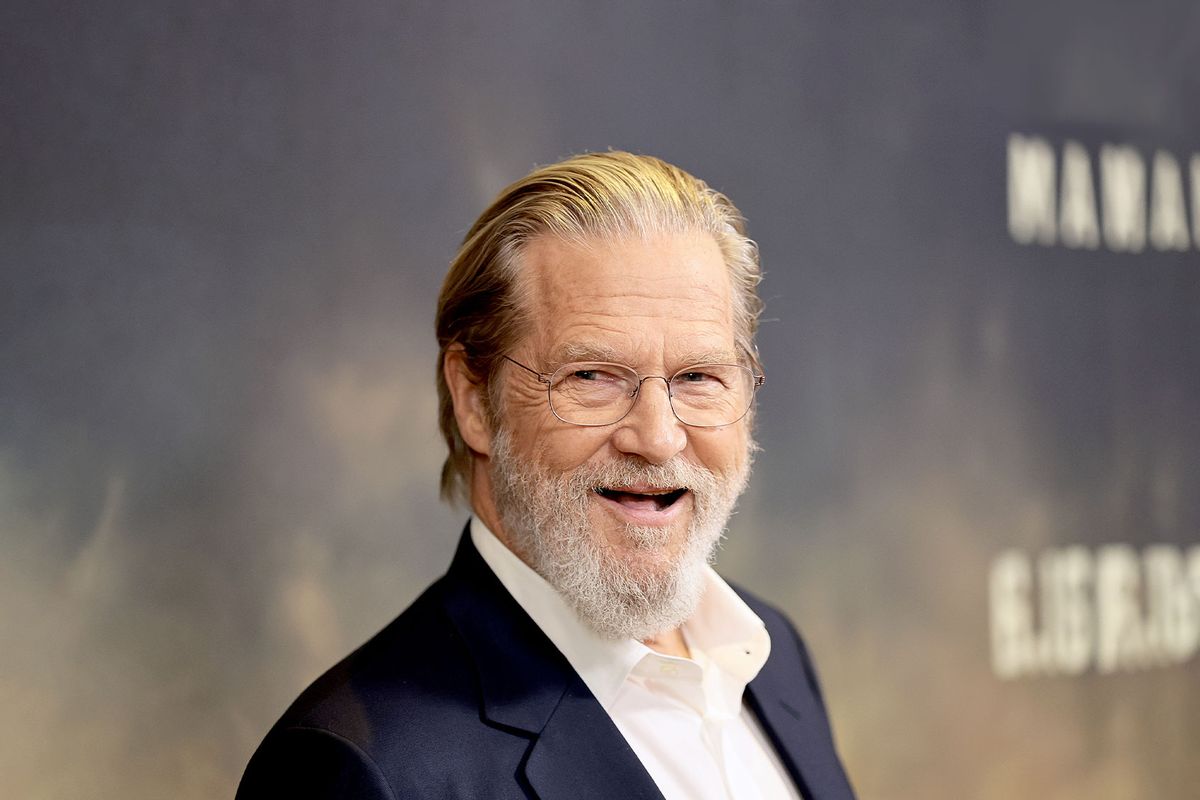 Jeff Bridges on the Dude, making "The Old Man" and the experience of "dancing...

Old Jeff Bridges is one of my favorite actors. Day 1 for me!

Never heard of this before stumbling across this thread - I’m in! And the first episode is on Hulu now, so I’m definitely watching it this weekend.

I noticed this morning that Hulu has the first two episodes. I’ll try to sample it this weekend as well.

I don’t know if this is going to be a core part of the show or not, but it’s one of the more intriguing elements of the first two episodes of this weirdly quiet but weirdly violent “thriller”.

It reminds me a bit of the concept in Logan, where Professor X goes senile and his powers threaten to destroy the world. This is that, but writ smaller because our hero isn’t an all-knowing and all-powerful mutant, he’s just a brutally effective Cold Warrior who’s really handy with his weapons of choice, and hoo boy, what weapons they are!

Animals attacks in movies and TV are difficult because trained animals are so often eager to please and therefore eager to play and therefore harder to make look savage. So sometimes CG has to take over. Can you imagine how goofy or quickly edited The Revenant would have been if Leo had been rolling around with a trained Hollywood bear? But sometimes, you can train an animal well enough and shoot a scene carefully enough that you don’t have some playful beast happily wagging its tail while a stunt man rolls around, hugging the dog and screaming as if he were being attacked. All the while, the dog is having a grand ol’ time and it shows. But then there are movies like Green Room, that know enough to work around this, that know how fearsome an angry animal can be. I really love this element of The Old Man. Which, thankfully, isn’t shy about giving its animals screen time. I’m constantly on the lookout for Dave and Carol, and sure enough, I’m constantly surprised that, yep, they’ve got 'em in the shot!

I was worried the series was going to shift focus to the younger version of the characters. So far, there have only been a couple of flashbacks, and I can take occasional short flashbacks, because I really like the guy playing a young John Lithgow. He’s basically Mark Proksch, but bad-ass, which is perfect for the character Lithgow is playing. But the guy playing the young Jeff Bridges is a total and complete miss for me, mainly because I have such a strong frame of reference for Jeff Bridges at that age: Starman, Cutter’s Way, Tron, even Big Lebowski. So this smarmy TV actor playing the young Jeff Bridges is nothing but a distraction to me. There’s also a woman playing the young Hiam Abbass, who’s a stately Palestinian actress many folks would recognize as the wife in Succession. And if I’m reading the plot trajectory of Old Man right, she’s going to get to do some cool stuff. So I really hope these flashbacks only ever get minimal time, because they have three tremendous actors who are perfectly capable of crafting intricate characters without being swapped out for flashbacks. :(

I don’t know the show creators’ other stuff, so the tone is new to me. But it’s got a slow and methodical pace to it, with occasional explosions of very matter-of-fact violence or brutality. It feels like a Coen brothers adaptation of a Cormac McCarthy novel so far, although there’s plenty of room for that to go catty wumpus in later episodes. But the groundwork being laid is so far very compelling and there’s not a lot I can compare it to.

Who else is watching this? It’s on FX, so I know it’s available to a bunch of folks!

I was already in when I saw who was starring, but fell deeply in love with it during the prolonged fight scene. I was also charmed when Dave (or was it Carol?) snuck onto the warm patch on the bed while Dan was in the bathroom. And the casting seems to be very promising across the board. Some inspired choices, imo.

You should probably merge this with the existing thread.

After two episodes of this, I’m absolutely sold.

I was on the fence but this tips me to checking it out.

The Ringer’s The Watch podcast did a segment on the first few episodes of this today, and they were highly enthusiastic. Now they tend to be a little excitable so I’m not considering that the canonical take. But considering how much I love Bridges and how he recently came pretty close to death, this might be his last thing. So, I’ll be watching. Premieres tonight (June 16, 2022 for posterity) on FX. [The Old Man | Official Trailer | FX]

Tom is the worst at searching for threads!

Shoot a dang monkey! I definitely searched the subforum and discovered there was no “Old Man” thread! Which was surprising, because I’d thought I first heard about the show from a thread here, but I guess not. So I started my own thread, took my time writing it, and then posted it. Only to realize I had posted it in Movies. Oops. Fortunately, I can avoid embarrassing myself thanks to my admin powers of moving the thread where it belongs! No one would be the wiser…

Except now it was posted in the subforum where I hadn’t searched for an existing thread. Doh. In my defense, it’s exactly the sort of thing Jeff Bridges’ character might have done!

So…No Country for The Old Man?

So…No Country for The Old Man?

I’m facepalming for not having come up with that myself!

One moment where the Cormac McCarthy thing hit me is the shot in episode two, after “Dan Chase” has been captured, tossed in the car, and is being driven away. He looks out the rear window and sees his two dogs following the car because they don’t know any better…and as the car speeds away, the dogs fade into the distance.

I had taken it for a wistful moment, when he would be separated from the dogs, and it reminded me of a similar moment in a Cormac McCarthy novel called The Orchard Keeper, when the main character is arrested and driven away, and the last he sees of his faithful basset hound is the hapless beast dutifully plodding after the car to follow its master.

But the twist in The Old Man is that it was instead just “Dan Chase” noting that the dogs were on the way just as soon as he could get the car stopped. Which, frankly, I’d lost sight of in the ensuing tussle, so when the frame pulls out and we see Dave and Carol flanking the mercenary, it was a total “gotcha!” moment for me. Of course! The dogs had been on the way the whole time!

I actually thought it was a little odd that he whistled for the dogs “too late”, as he was being dragged into that car, for them to be able to actually do anything, and I wondered while he was being driven away (even though I understood that they were following) if I had missed something, or if it was just intended to frustrate us. Then at one point during the car fight, I found myself feeling (not for the first time) like the struggle had to be taking a huge toll on his old man endurance, and I wondered if he had a plan for dealing with that. Then, when it appeared that he was losing the fight for like the second or third time or whatever, I remembered the dogs again and laughed as I finally realized what was happening, and sure enough, all that tension paid off. And then, as I was reading Tom’s comment just now, I remembered that the whistle wasn’t actually an “attack” command (we were already shown what “attack” sounds like), and that the writers were probably hoping we might make that incorrect assumption.

Looking back now, I think Dave and Carol understood from their training that they were not to join the fight unless ordered to, and that Dan was intentionally having them stay back until he knew that he was about to enter the car. At no point during most of the fight did they do anything more then approach the fighters and then follow when he ordered them to.

Looking back now, I think Dave and Carol understood from their training that they were not to join the fight unless ordered to, and that Dan was intentionally having them stay back until he knew that he was about to enter the car. At no point during most of the fight did they do anything more then approach the fighters and then follow when he ordered them to.

I wonder if we’ll find out more about how he came by these formidable beasts? I wouldn’t mind if we just have to accept that he has them, but if we’re going to explore his backstory, let’s at least get the Dave and Carol origins story. So far, that’s the only flashback stuff I’m looking forward to!

And I’m really glad that Alia Shawkat has been drawn into the fold as a whole new layer of intrigue. Pretty sneaky development! Although the last time she acted alongside vicious dogs, it did NOT go well for her. :(

I’m probably really going out on a limb here, but the close-up shot of a copy of Le Morte d’Arthur sitting on the shelf next to a Quran in the first flashback scene caught my attention and brought a theme to mind: failures in love, in loyalty, and in religion. In that scene, Dan confesses to Hamzad his failure in loyalty to the US (and to the CIA), and the next scene (in the present) seemed to focus on some of his failures in love. And later, Harper describes how Dan had stolen Belour from her warlord husband (Hamzad), which reminds me of Lancelot and Gwenyvere.

So I’m enjoying this and I appreciate the cool discussions and insights. The end of episode 3 kinda hurt and I wonder if anyone else felt that way? Who thinks the divorced landlady is in the trunk? Well, I suppose she has to be in there with how that episode ended, but I guess the real question is whether she is dead or alive.

This old man, he played knive
He carves Knick Knack in a merc’s hide
Knick knack! Paddywack!
Give a dog a bone
This old man came rolling home