@ArmandoPenblade are you watching this? If you liked The Princesses of Power, you’ll like this.

Never heard of it, but I’m down to give it a shot. I got pulled into Voltron on Netflix but, like Dragon Prince, it’s just not grabbing me super hard, so I’ll probably give this a try soon. Looks like I get the VODs through my YTTV subscription, which is currently surviving its absurd price hike due to the return of NBA games. . .

Princesses of Power’s creator’s wife is a writer on it. Gravity Falls is also great

I wanted to like the Owl House (the creator was a writer for the new Duck Tales, which had me optimistic), but felt there isn’t much there, there.

The world building is fine, but characterizations are all pretty minimal, and there’s little, if any, overarching storyline either. There are some good jokes here and there, but they’re just good jokes, there isn’t much else there. It’s very much a kids, probably pre-teen? show.

I watched the first half dozen or so eps, but didn’t even like it enough to show it to my 7 year old.

Yes, story-wise it meanders and really doesn’t go anywhere in the first dozen or so episodes but character development finally moves after those episodes.

The new Duck Tales has a character with 2 dads. Disney’s TV branch is probably one of the more progressive wings of the company, or at least the stakes are low enough that they’re willing to give a little more freedom.

Without any additional info, my guess for the Owl House character would be Eda? She seems like she’d be pan, since she’s not much for following other peoples rules. Also, most of the younger characters seem pre-sexual.

I would just like to see Dave the Barbarian available to watch again.

I haven’t seen the show, but the character in question is Amity. Back when I made GF Disney FORBADE me from any explicit LGBTQ+ rep. Apparently “happiest place on earth” meant “straightest” But as of today, thanks to @DanaTerrace & team there are explicitly queer ANIMATED MAIN CHARACTERS on DISNEY TV. Im so proud & happy to say that #OwlHouse twitter.com/danaterrace/st…

I'm bi! I want to write a bi character, dammit! Luckily my stubbornness paid off and now I am VERY supported by current Disney leadership. (Thank you @NashRiskin and team!) Not to mention the amazingness of this crew.

In 2012 the Disney censor note on this image would have been: “inappropriate for channel, please revise, call to discuss” (to avoid a paper trail) Now in 2020- there’s no note at all. Props where props are due! This time, Disney- you did good. https://t.co/HLDux1jNUk 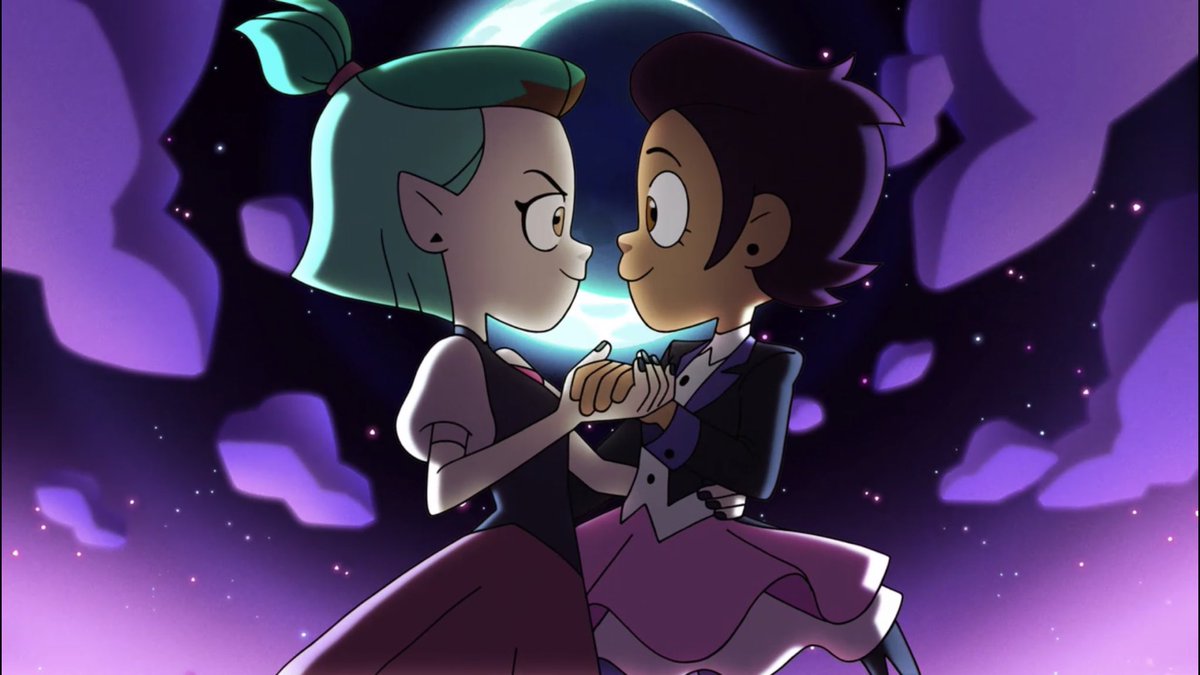 Also if you have a problem with this stuff, take it up with your therapist, or whoever in your upbringing taught you to fear something totally normal. They did you a disservice, and you can still grow. Gay people exist. They live with your bullshit, you can live with theirs
CLWheeljack August 10, 2020, 9:34pm #9

I haven’t seen the show, but the character in question is Amity.

Ah. Makes sense. She was barely a presence in the episodes I saw, but she was pretty clearly being positioned as a friend/rival to the main character.

Show is alright, I enjoy Amphibia more as the heir to Gravity Falls.

Will probably check this out whenever it shows up on Disney+.

Yeah it’s kind of bullshit how they delay the shows going to D+ until after they finish their run on cable Disney Channel. Gotta make the paid subscribers wait to milk that ad money.

The Dragon Prince (Animation From Head Writer of Avatar TLA)

Of the “uplifting young adult fantasy series with mild but very sweet romance” series I’ve binged since the lockdown, only the Arcadia trilogy from GDT is failing to hold my attention more than Dragon Prince did.

Did you give the Owl House another shot? Just curious, since I didn’t feel it landed super well either.

It’s on my list, though I’ve been sidetracked badly by the NBA playoffs and Hades the last little while. I also really loved the pilot or short ep of Infinity Train that came out online a year or three ago, so if it’s in full production now, consider me interested!

There’s 3 seasons (“Books”) but the scuttlebutt is that it’s been cancelled before 4 was greenlit. Everyone has been fired/let go but that could just be part of COVID-19.

I was so happy to see this thread bumped because I figured it meant that it had finally come to Disney+.

But no. Just disappointment.

I was so happy to see this thread bumped because I figured it meant that it had finally come to Disney+.

But no. Just disappointment.

Disappointment reversed! This is on Disney+ now.

The Dragon Prince (Animation From Head Writer of Avatar TLA)

Of the “uplifting young adult fantasy series with mild but very sweet romance” series I’ve binged since the lockdown, only the Arcadia trilogy from GDT is failing to hold my attention more than Dragon Prince did.

Did you give the Owl House another shot? Just curious, since I didn’t feel it landed super well either.

I’m about two episodes away from the finale so far. As a big Harry Potter nut in my late teens / college years who’s kinda soured on the series thanks to JK’s relentless shittiness, this show is perhaps more up my alley than it otherwise would be. Lots of great little hooks, amazing representation without being ugh about it (no dead gay tropes here yay), some really intriguing little bits of world building that are accumulating, and a surprisingly tight cast of main and supporting characters that’s actually been really skillfully assembled. Some early eps had lots of what felt like jokey, one off side characters, and some parts of the main cast felt pretty flat initially, but episode by episode, they’ve been pulling back more and more and those little nobodies keep getting rolled back in in fun ways, and the main cast is developing really well.

The animation of the, uh, dance in the Grom episode in the back half of the season was really breathtaking and the whole scene was just…everything I like in TV.

It definitely took awhile to get going. I spent two months slogging through the first few eps, with weeks long breaks in between each as my interest flagged, but I’m really glad I kept with it.

It actually has a vague Disenchantment feeling for me, in that it was a silly and seemingly ephemeral gag take on one of my favorite fantasy setups that swiftly developed into an unexpectedly endearing and heartfelt character study.

Okay yes this season ends on some epic ass notes and reveals some really tantalizing lore questions. The dark n spooky elements also get dialed up to 11 there, and there are a couple of AMAZING magic duels in the last batch of episodes. Hell fucking yeah, now give me season 2!