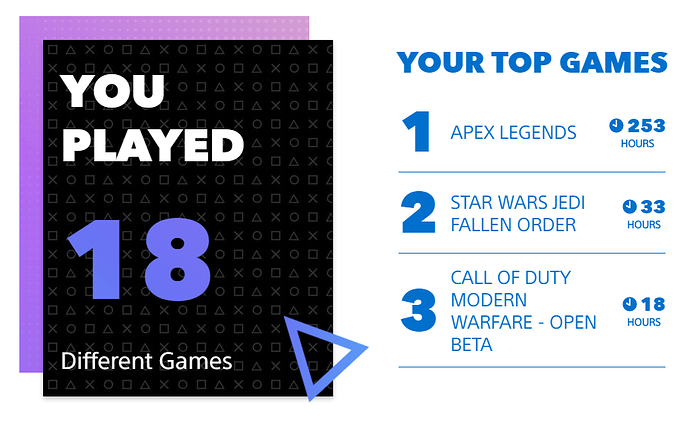 I played a lot of Apex. Probably put another ten hours in on PC if I had to guess as well as at least three or four on Xbox One. Jedi time is interesting to me. That’s my playthrough without doing a lot of backtracking to find stuff I missed on Jedi Master difficulty.

We were talking about this on Twitter and apparently Free To Play games and those that don’t require PS Plus are not considered online even if they are.

I forgot I played Soma on Playstation, not PC 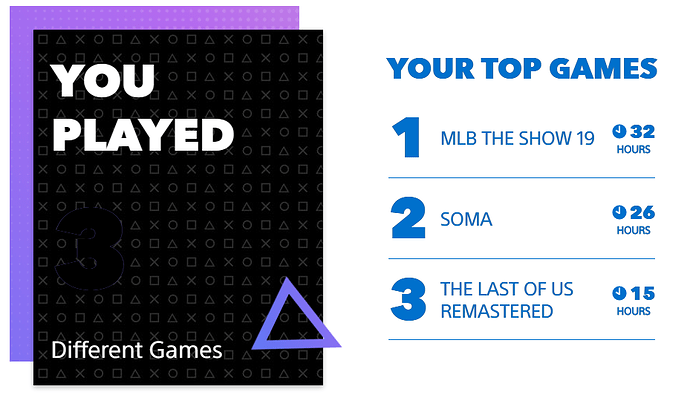 I played my consoles more in 2019 than any year since probably…Sega Genesis or maybe even the Atari 2600. 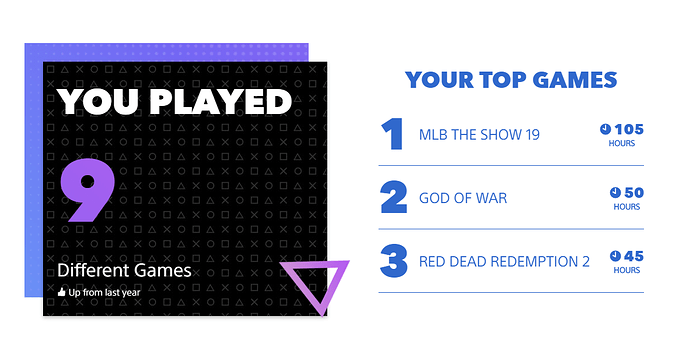 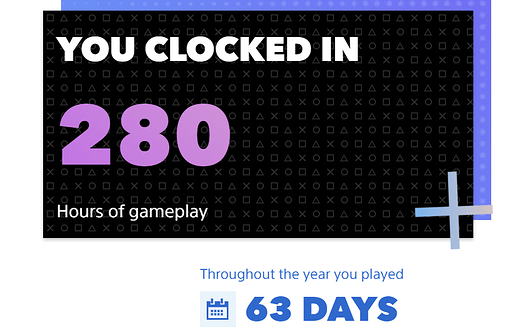 Does this only work if you pay for PS+ (which I don’t) ? I tried, and it gave me a message about minimum amounts of playing online, etc. I nearly beat Horizon:ZD and kicked NMS around in VR a bunch, so I definitely put hours in…

2019 was the year of [Daytona USA music] PERSONAAAAAAAAAAAAAAAH! [/music] 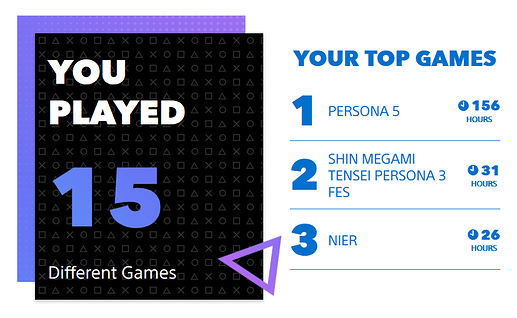 I wish I could see the rest of my list, though, because…good lord… 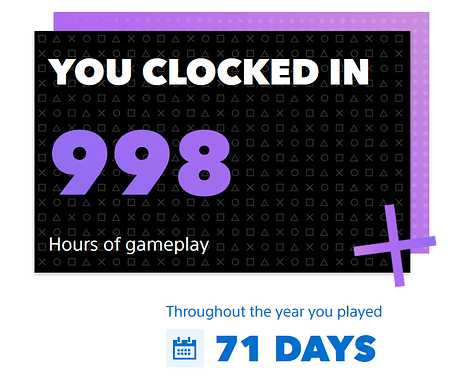 that one…and that one…no, played Horizon: Zero Dawn in 2018…add 3…carry the 1…
…yeah, I have no idea how I clocked that many hours.

998 hours in only 71 days. That’s some serious poopsocking right there.

Does this only work if you pay for PS+ (which I don’t) ? I tried, and it gave me a message about minimum amounts of playing online, etc. I nearly beat Horizon:ZD and kicked NMS around in VR a bunch, so I definitely put hours in…

I have the same problem. I haven’t played much in the past 3 months but I definitely put in more than 10 hours last year.

I just got the same notification, but I was unsure if I hit 10+ hours or not. I certainly don’t have PS+

What do I win?

A paperweight, that’s what.

I got a theme. It’s kinda cool. Nothing you can’t live without though.

A paperweight, that’s what.

Only available in US and Europe and those are two different links (see above).

Oh different links. Hey this worked for me then.

Check out your personalized 2019 Wrap-Up #MyPSYear2019

But the one above didn’t.

Got my PS4 around Black Friday 2018, almost finished Spider-Man in 2018, and then my kids mostly took it over, but still managed in 2019 to use it as my Dead Cells machine: 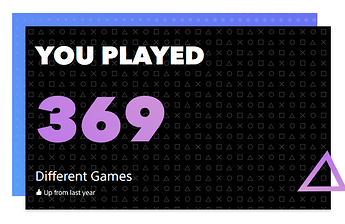 I’ve been trying to go through the backlog (Almost done!).
That’s 6 years of PS+ and whatever else.

…yeah, I have no idea how I clocked that many hours.

Maybe it counts the TV apps? 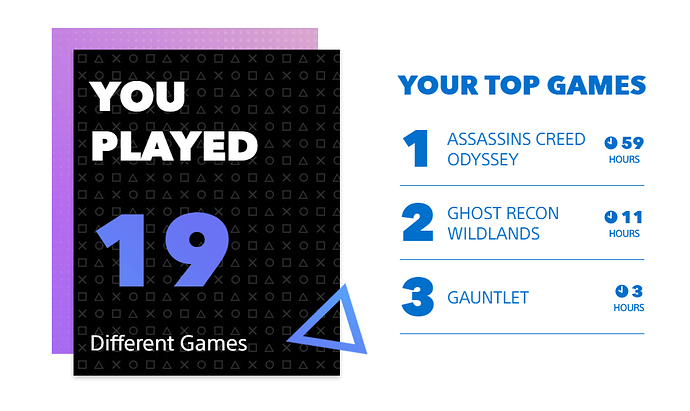 Not bad for a console I only use for exclusives (all multiplats are played on the One X). 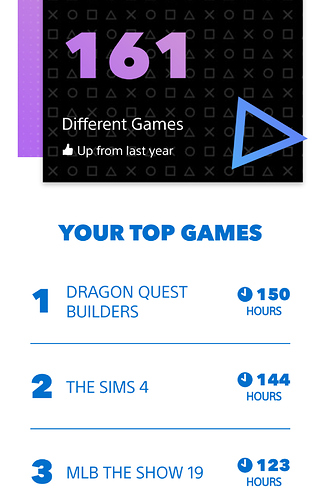 I’m going to turn this around. 2020 is going to be the year of Playstation 4 for me.

I guess I played Horizon Zero Dawn and Spider-Man in 2018, not 2019. I thought I played a lot of Injustice 2 after that, but maybe because I deleted the game for hard drive space, it didn’t count? And because Untitled Goose Game, Lovers in a Dangerous Spacetime, Overcooked, and Jackbox was usually booted up through my wife’s account, that’s why it didn’t show up here? The baby came in early February, and came home from the hospital in June, so it was hard to get to much console gaming. I think at least five of these RDR2 hours were spent asleep in front of the TV, still logged in. 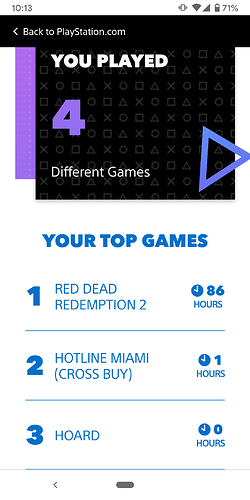 But Hoard and Hotline Miami from my PS3 I turned on one afternoon for old times’ sake? Why are you on the list?

If Netflix and Amazon Prime Video counted for hours, they would have been the big annual winners of timesinks, no question.