The Psychology of Launch lines 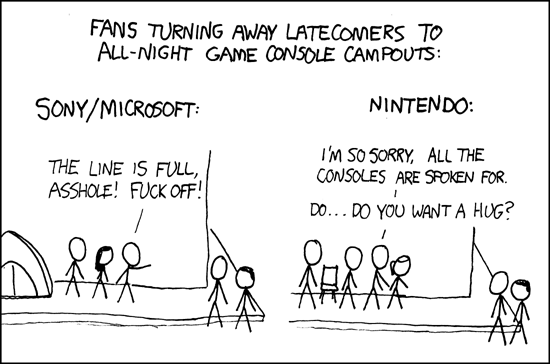 If I get a Wii, it will be the first game console I've owned.

Now, an article about the same trend:

Both basically pointed towards the fact that the ps3 launch had violence, and the wii launch was a more laid back affair.

Any reason for this besides the scalpers?

Any reason for this besides the scalpers?

High demand with few available units, simple as that. If you go by that article’s logic, are Tickle Me Elmo fans also hyper-competitive?

(Edit: Oh, and having almost been trampled by Nintendo fans when the Gamecube debuted, and having our booth trashed by the rampaging horde, I’m going to go out on a limb and say if the Wii had 150,000 units available, it would have been uglier.)