So I should skip the prologue? I thought that was the tutorial? I guess maybe that’s why the prologue option was below the single player campaign option maybe.

Oh god, is it really Dark Souls style of play? I was interested in trying this up until I saw that.

No no no, its not like Dark Souls, lol. Tom is playing and enjoying it I believe. And he is the worst at anything Dark Souls. :)

It’s not that style. It’s a tower defense game. But in order to build the towers and the walls, you need to build a base and mine resources, and the world has no clear places to put the walls and the towers, so you just have to put them where you can. I’m sure it will just take me some time to adjust. Tower defense games are usually a lot more defined, in that there’s obvious places to put towers, etc.

The dev made X-Morph: Defense before, so I guess you can expect something similar.

BTW, this is available on GOG as well:

You play the role of captain Ashley S. Nowak - you are the Riftbreaker, an elite scientis

Yes, you need to place wall in front of the tower, preferably in double layer. You need to find choke point in map to place wall and tower to maximize the return of resources. In this regard, this game is like “they are billions”.

Woah, it already has its own thread! Looks around in wonder. Impressive.

I was about to come start a thread because this game is going to need it. I’ve been played a review build for the past few days, so I’m not sure how it differs from the demo/prologue that was released earlier.

I always knew from @Steven_Peeler’s excellent games that an action RPG with a wider context is better than an action RPG that’s just about killing stuff and taking their loot. But it never occurred to me that there was a hole in my life shaped like Mindustry/Anno as an action RPG. Ye gods, what an insidious invention for how it spans multiple maps, not to mention multiple genres. The crafting, the fighting, the resource management, the base-building, the intricate tech tree, the lovely graphics! I’m in logistics heaven!

Holy cow. If you’re that passionate about this, it’s got to be amazing.

One question. After looking at this and their previous game X-Morph I’m concerned it’s got too many action arcade shooty bits? Kinda hoping it’s at the same level of Factorio.

After looking at this and their previous game X-Morph I’m concerned it’s got too many action arcade shooty bits? Kinda hoping it’s at the same level of Factorio.

The action is very much like an action-RPG or twin-stick shooter. Lots of running backwards while you shoot/punch oncoming swarms. But the difficult combats aren’t about reflexes so much as figuring out vulnerabilities of specific enemies, ammo management, and navigating the environment. There are also some parts of the game that are a bit like the “commando” levels in an RTS, where you go in to fight rather than build a base. Nothing you can’t handle if you’ve ever played an action RTS.

I bought it “blind” after Tom’s reaction to the game. But I’ve heard lots of good things about X-Morph, so it’s not a “totally blind” thing - the devs definitely know what they’re doing.

Played about an hour on the XSS. Runs good, graphics are pretty. I don’t really like twin stick shooters but I enjoy base defense type games. Playing on Easy to get used to all the systems. Thought it was more of a quick mission kind of thing but built the Communication Hub which enables you to research more items to build and use and wow, it’s a pretty large research tree. 3 trees actually. I need to change my mindset and think long term now. It’s cool so far.

Thought it was more of a quick mission kind of thing but built the Communication Hub which enables you to research more items to build and use and wow, it’s a pretty large research tree. 3 trees actually. I need to change my mindset and think long term now.

I’m not sure what kind of expectations the prologue/demo set up, but that is absolutely the right way to think of Riftbreakers.

It’s a long-term proposition built to be played as a campaign game on a set of procedurally generated maps. In the course of playing, over many hours that will probably include lots of setbacks, you’ll progress through the tech tree and the bestiary, even if you stall your economy and have to rebuild everything. But those two elements – the tech tree and the bestiary that unlocks much of the tech tree – are your progress, more so than whatever your economy is doing or how your character build is ramping up. Normally, in this kind of colony management sim, you might be tempted to restart. But in Riftbreakers, don’t restart! Gauge your progress by the tech tree! As long as time is passing and you’re queuing up tech, you’re making progress.

Also, keep in mind that it alternates playing style a fair amount. You’ll explore the ecologies, clear out hostiles, expand your base, and optimize your economy, but not all at the same time. Oftentimes you’ll only be doing one of those four things at a time, ignoring the other elements entirely. That’s as intended! Don’t feel like you have to play this as an exercise in keeping spinning plates in the air. Feel free to just focus on one type of gameplay at a time.

Don’t feel like you have to play this as an exercise in keeping spinning plates in the air. Feel free to just focus on one type of gameplay at a time.

That’s reassuring for me, multi-tasking is not my strong suit.

This is sounding cooler and cooler. I should give it a spin since it’s on GP.

I tried the demo during that big demo bash over the summer I think it was? But I found it pretty darn difficult, or at least got overwhelmed with choices pretty quickly and I got kind of bummed out and quit. Maybe the full game’s tutorial is better at easing you into things than the demo did.

Hmmm. I actually dislike twin-stick shooters quite a bit. If the demo is a good representation of the game I’ll give that a try.

Oftentimes you’ll only be doing one of those four things at a time, ignoring the other elements entirely.

This changes my perception of the game entirely, and make it sound much more palatable. Very good to know - time to grab that demo!

The prologue / demo is a holodeck style training mission for your character to learn the basics, even with graphical glitches! It has nothing to do with research though, so that stuff is all saved for the campaign.

I’ve played it 4 times now, and it always ends like this for me: 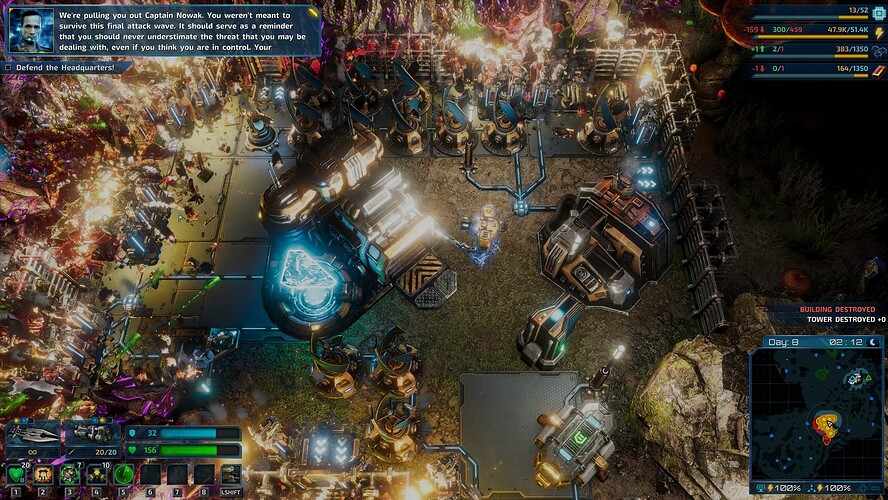 Whoever survived it I think is lying! :P

Played a few hours this afternoon. Pretty decent, but I find the controls to be a bit clunky as you switch between weapons, abilities and construction.

I like how your base naturally grows to accommodate nearby resources, but I don’t think I’ve played far enough in the campaign to get the hooks into me. Plan on playing another few hours tonight.