Played a few hours this afternoon. Pretty decent, but I find the controls to be a bit clunky as you switch between weapons, abilities and construction.

I like how your base naturally grows to accommodate nearby resources, but I don’t think I’ve played far enough in the campaign to get the hooks into me. Plan on playing another few hours tonight.

…got overwhelmed with choices pretty quickly and I got kind of bummed out and quit.

The “orbital scanner” screen – this is basically a list of all the instances you can visit – tracks your overarching objectives. This is the place to go if you find yourself lost in the moment-to-moment weeds, which is easy to do. There’s a lot going on at any given moment, but the game is built to let you focus however you see fit. Which is easy to do when you look at the list of objectives. Just pick one when you’re ready and run with it.

That said, there’s been one constant for me: you can never have enough carbon and iron. Err, excuse me, carbonium and ironium (it seems like “ironium” was “steel” when they recorded the voiceovers, since the robot sometimes bitches about not having enough “steel” when he clearly means ironium, and I’m, all, like, “dude, I don’t have any steel because we’re not even making it!”).

These two things are the foundation for your economy, and most of your resource crises will be a shortage of carbon or iron. Or energy, of course. You can also never have too much energy. There are plenty of mid-game sinks for extra energy, so you’ll be glad if you overpower your bases.

So, the first rule of Riftbreaker is A.B.B.C.I.&.E. “Always Be Building Carbonium, Ironium, & Energy”

I find the controls to be a bit clunky as you switch between weapons, abilities and construction.

God, so much this. But I think I finally figured it out: Riftbreaker is a game in which you climb in and out of a vehicle.

When it’s time for combat or exploration, I climb into the vehicle, which means taking up a game controller and playing an action-RPG/twin-stick shooter. Simple and intuitive. But when it’s time to build stuff, manage resources, and tune the economy, I climb out of the vehicle, which means putting down the controller and playing a city-builder with a mouse and keyboard.

I don’t think either control scheme works well for both types of gameplay, so for me, it’s always one or the other. I’m either in the vehicle and driving around with a controller, or I’m out of the vehicle and managing my economy with a mouse-and-keyboard.

I’m used to playing Grim Dawn like that - controller when I’m ARPG-ing, mouse and keyboard any time I need to do inventory management or anything of the sort - so I guess I’m golden. ;) 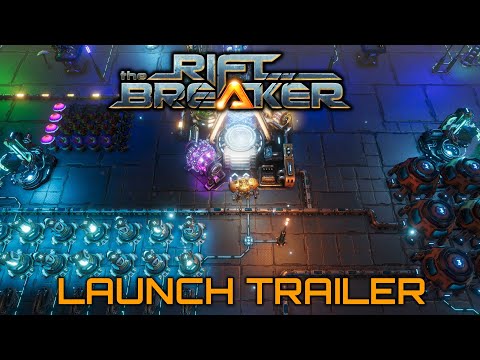 I tried this again yesterday, this time picking the campaign instead of the prologue. I lasted a little longer, about 10 minutes instead of the 5 minutes in the prologue, and I saved my game and quit. It just seems really complicated and hard. I guess I’ll give it one more shot tonight, but it might just not be for me. I wish it had more hand-holding so I could understand it better on how to play it.

5GB? What kind of game fits into a poxy 5GB?

Only played the demo, but I’m not so sure it is ‘hard’ vs just very ‘busy’. There is a lot of stuff on the screen to try and parse. It gets a little easier deeper into the demo just with experience/familiarity but some stuff certainly is left unexplained. It is quite pretty though!

It seems like a fine TD game, but I’m finding I need my games to be pausable nowadays. I don’t need the hectic stress!

Well, for instance, when I started the main campaign. I had to explore a little for the first resource that you need. And I tried going north, more north, more north, didn’t see it yet, figured it would be not that far from my starting position so I went East a little and ran into a huge group of enemies, and so I tried firing on them but my guns weren’t firing for some reason so I eventually died.

So then I thought, no problem, I know when I was backing away from the enemies where they are now, and where the starting resource is now. But no, when you restart it puts you on a new random map so you have go find the starting resource all over again. I did find it without running into the enemy this time! But when I setup my base, and an extractor, I setup a tower and put some walls in front of it, so my north side was protected, and my west side I was covering.

The enemy attacked from the east, which was all wild forest and I thought a natural barrier, but apparently not. Anyway, my guns fired this time so I killed them (I think I must have been in build mode in the first game, somehow, in which your guns don’t fire). So now I setup a bunch of walls to the east a tower behind them. But I couldn’t finish the wall because I didn’t have enough resources. Then the game told me to build an armory, but that requires a second resource, which is very close to where I initially spawned, but that’s too far away to build an extractor to. So I went there myself to manually extract, but then my base was under attack from that incomplete wall, and I went there and got rid of them and went back to manually extract some more because I still didn’t have enough resources to build an armory.

Anyway, that’s where I saved and quit. It just feels overwhelming, yeah.

my guns weren’t firing for some reason

You probably spazzed out and entered build mode. I’ve been there, man. Died several times, too. Just remember CTL key on a keyboard and Y on a gamepad. Alternatively, you might have run out of ammo, in which case switch to another weapon. An armory will replenish your ammo over time, but you still want to slot weapons that fire different types of ammo, just to be safe. Although that may not be an option considering how early you are in the game. Ten minutes into the campaign isn’t going to get you very far in any game!

When you die, you’ll respawn at your HQ or Outpost. If you haven’t built one of those, I think the game feels sorry for you and lets you choose “reconstruct” if you don’t want to reroll a new map.

Ten minutes into the campaign isn’t going to get you very far in any game!

I just want to point out that 10 minutes into any other tower defense game I’ve played, I’ve already finished one map, possibly two maps.

This is not a tower defense game. It’s an action RPG fused with colony management.

But creating some vertical structures to go on anti-offense did come in handy.

I love building walls in this game, and there is plenty of resources to do so.

But creating some vertical structures to go on anti-offense did come in handy.

Well, yes, you definitely use towers to defend your base, so it’s got that going for it! In fact, one of the towers is actually a platform your stubby little robot can stand on so he can shoot over walls. It’s like a booster chair for mechs.

I love building walls in this game, and there is plenty of resources to do so.

Really? What am I missing? Can you put multiple extractors on the same resource node to speed things up maybe?

It’s like a turtle mode, base building game. You can fit multiple extractors on most nodes. I often do two carboinium miners and one carbonium generator for power. Then I spam wind and solar when resources get full. Radar and the map is helpful to understand the area but the icons don’t make complete sense.
I just jumped to the next area. It was neat to see how the desert environment puts different pressures on your mech and base.
Took me a long time to figure out Q and E switch your left and right handed weapons. Grenade launcher is good for taking out those armored packs or big golems.

Can you put multiple extractors on the same resource node to speed things up maybe?

It depends on the surface size of the node. The extractors are 3x3, so as long as they’re touching the resource somewhere, they’ll fit. As for there being plenty of resources, as @lordkosc says, you can see exactly how many resources are in any given node. You’ll routinely find nodes with 20k carbon or iron, and given that a wall section only costs 5 carbon, yep, there’s plenty left over for building walls!

Radar and the map is helpful to understand the area but the icons don’t make complete sense.

Which ones are confusing? I can probably help.

Also, there’s an early tech for radar pulse on your mech, which is a huge help during exploration and if you want to avoid packs of enemies.

When you play the start mission once you kill the first wave, it doesn’t spawn a new until missions are done, use that time to build and explore game.

Go to crafting and make a second machine gun, then dual wield those suckers with one on each arm for max awesome