Sorry, I’m a little unclear. I have never tried any of these games on Netflix, I just remember when they were being announced or released. So, this game for example:

I assumed that since they had the same title that they were essentially the same game.

In that specific case I am not 100% sure, as I am not familiar with the telltale game. But from
What I’ve read fit is a distinct, and largely simplified, version. There is no character control in environment navigation, for one.

Yup. The Netlfix “games” so far have been similar to basic choose-your-own-adventure books. Go left or go right? Say “I love you!” or “Can we just be friends?” Pick from these four options. Etc.

That seems like a nice niche for them to start with. Now that Telltale is no longer churning out half a dozen of those kinds of games, Netflix could fund some more. 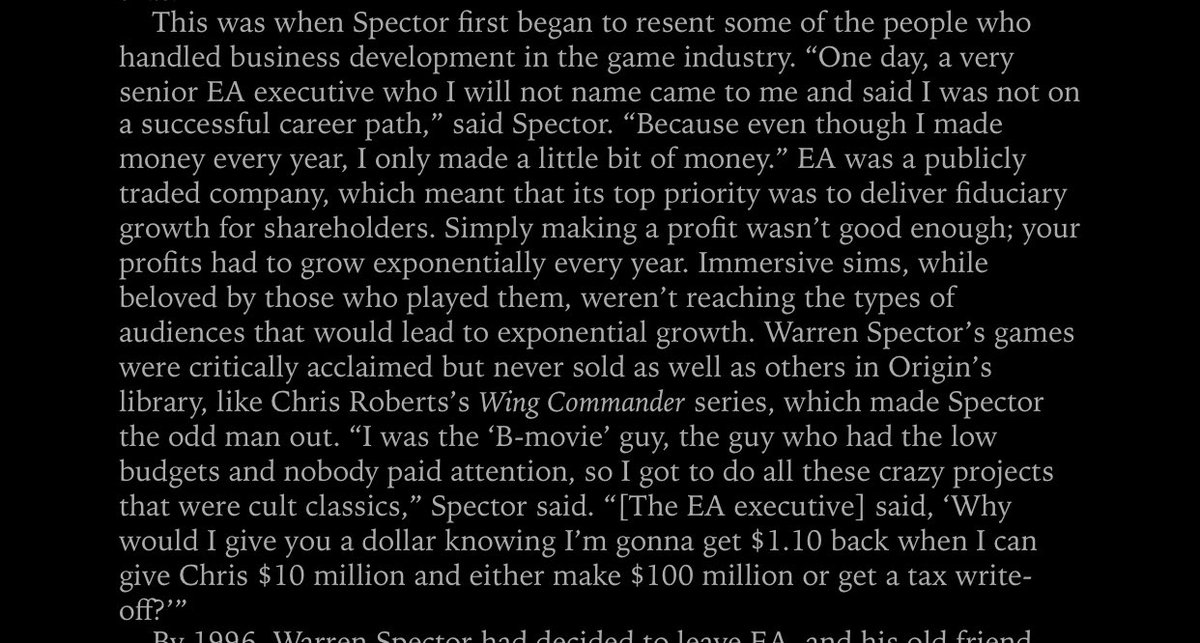 Infuriating, sure, but surprising? Nope.

Is this a different Chris Roberts who is able to finish projects and not mismanage them by paying for stalkers-turn-exwives’ vanity Hollywood careers or vacations and houses?

It’s the same Chris Roberts who knows he can keep making his spaceship games as long as they generate massive profits, but before he discovered delivering an actual finished game was unnecessary.

Isn’t that pretty much also how the movie business works? WIth the added caveat that some executives are also all about doing “art”, so they’ll sometimes give some money to people to make Oscar stuff or some high concept Art with a capital A movies, while games executives couldn’t give a damn about the art of games?

Nowadays big movies made by big studios are toy commercials that go on for 200 minutes. But traditionally, a big budget movie was a huge risk, because box-office success was tough to predict, successive sequels often generated diminishing revenues, and the studios needed to release a lot of movies to fill the theaters for 52 weeks in a year, and they couldn’t all be made by James Cameron.
The MGM or Universal or whatever executives were always looking for the profits, no different than an EA exec, and that meant spreading the eggs around. Just about every Oscar winning movie has been a financial success.

Any properly run con never reaches the end and requires an endless stream of fresh capital injected into it. Chris isn’t original in the idea he stole it from Silicon Valley.

Any properly run con never reaches the end and requires an endless stream of fresh capital injected into it. Chris isn’t original in the idea he stole it from Silicon Valley.

That’s…not actually how a good con works. A properly run con lands the blow, and ends with the perps walking off with the money.

The part you’re forgetting is white collar criminals are hardcore recidivists who are drinking their own Kool-Aid, so an essential part of the con for them must include that it doesn’t end or it has a reset.

A quick blow as you describe while it would indeed be the smartest play, is almost never the actual way white collar crime takes place.

It sound like you’re arguing with me, but I don’t think you actually are? I mean, yes white collar criminals don’t plan in blows or resets because we as a society don’t enforce those crimes and they’re buying into their own bullshit and don’t think of themselves as conmen. I’m just saying that’s sloppy tradecraft and not the way to run a “proper” con.

I dunno, I guess I’m just a stickler for definitions.

Not trying to provoke an argument, but it just so happens this a topic I have first hand experience with because in a previous life I prosecuted white collar criminals for a living. So I’ve seen all of this first hand.

“Proper” cons are something for movies, in real life con men are on a wide spectrum in terms of how well they plan their cons, but they all share one trait: they never stop. And as you say this is likely in no small part because they believe their own stories and becasue we as a society don’t give a damn about prosecuting them (part of the reason I moved on).

Wait, you mean The Sting wasn’t a documentary?

A properly run con lands the blow, and ends with the perps walking off with the money.

They call that an IPO or buyout nowadays.

I still don’t disagree with anything you’re saying per se. But even if they can’t stop themselves from doing it, to actually run a proper con, you have to actually understand that you are running a con to do it properly. Like, you can’t tell me when for instance Joseph Weil swindled Mussolini out of those millions, he didn’t know what he was doing. (All my actual crime references will be about a century old, because that’s fun as opposed to depressing to read about.)

My condolences on trying prosecute white collar crime by the way.That must’ve been a rough gig.

They call that an IPO or buyout nowadays.

Is anyone else reading Jason Scherier’s latest book, Press Reset? Really fascinating look at game development primarily focusing on the people and their journeys from one studio to another, instead of focusing just on the companies.

One chapter is about the folks at Big Huge Games who worked on Kingdoms of Amalur: Reckoning, and how they got caught up in Curt Shilling’s 38 Studios mess.

I had forgotten that Epic Games hired 40 of the laid off BHG leads and team members to start a new studio, and that Epic closed them up again just 8 months later. Tim Sweeney seems like the asshole responsible for the whole thing.