The Steam Machine is quietly dying

It’s a damn shame. I was really hoping to get an Alpha down the line sometime. Maybe not even for the TV, but as my main computer. But I was hoping they’d have a better video card in it by then.

Yea, they had something special. But this was a custom engineered PCB and Dell’s just not going to spend that kind of money for a $400-600 product.

I was hoping against hope they’d throw the Intel Hades Canyon parts in it, but alas.

Steam OS sold hardware manufactures on the line that it could “outperform” Windows PCs with weaker hardware. I remember videos of Left 4 Dead 2 running on tin cans and string at 200 FPS and everyone was excited for Steam OS. The Alpha was literally built to take advantage of that opportunity. And either Valve was lying or something happened, but Steam OS performed the same or worse. So weak PC hardware just meant weak performance and Steam OS died on the vine.

Honestly the Alpha was kind of in the worst place possible with cryptomining destroying the video card market.

Edit: I do think Valve burned a lot of OEM bridges with Steam OS. Steam OS 2.0 - if there ever is such a thing - is going to be very much a DIY thing. Maybe they’ll have a “fun” guided self help page with characters from TF2 and DOTA2 to help you install it.

The former owner of Alienware. He sold it to Dell, and at that point lost control, but can soak up his tears with millions of dollars.

Maybe he blew it all on sweet RGB water coolers and loot crates then, cause he sure didn’t look like he wanted to be part of Alienware anymore. I can’t imagine he has any employment restrictions forcing him to stay at this point. 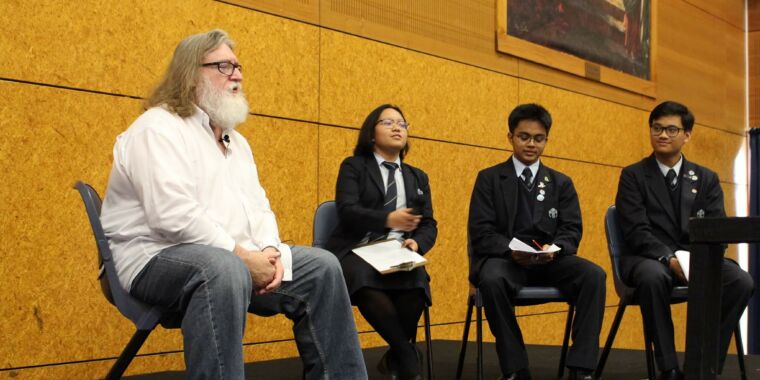 Isn’t that article simply hinting about Valve possibly releasing a game on console, rather than creating some kind of new Steam Machine console?

Possibly it could be HL Alyx appearin on PSVR2.

I don’t think Valve made Underlords.

Man, Artifact doesn’t even register as a butt of a joke at this point.

I don’t think Valve made Underlords.

AFAIK it was developed in-house at Valve. The player numbers are pretty miserable, and that despite it being available on iOS and Android. Seems hard to believe they’d bother with a console port.

Thanks for the correction. I must have been thinking of one of the other dozen autochess variants that were popular briefly before they all collectively fizzled out.

Although many would say it doesn’t actually release games.

Seems like this could be one of a couple things:

So color me intrigued.

Valve has a lot more market power than Nvidia when it comes to this. They could e.g. make it part of their standard contract going forward. Or even if they don’t make it mandatory, they could offer extra promotion slots on Steam to streamable games. The latter kind of indirect subsidy has worked for them before, the number of games with native Linux support is kind of crazy in comparison with the market share.

In fact, a cloud streaming service would neatly explain they’re still continuing to invest into Proton (and Linux gaming more generally). At this point it can’t be just be insurance against Microsoft closing up Windows.

The fact that their Steamboxes ran on Linux is one of the big reasons why they failed, same with Stadia. If they’re counting on Linux gaming to help power their way into cloud gaming, they are doomed. Doubly so because they seem unlikely to even go to the somewhat muted lengths Google went to get people to port their games.

But yes, I agree that Steam has massive scale, but like Nvidia they have a vested interest in keeping publishers happy. Would they mount a lawsuit to force companies to let people play their Steam library in the cloud? Hard to say. I guess I think it’s marginally more likely than Nvidia because Gabe is a purist a bit like Tim Sweeney.

Using Windows for cloud gaming is doomed at scale, due to both the licensing costs and the licensing uncertainty. Microsoft has already done some brutally anti-competitive things around Windows licensing to win in the public cloud market. They’ll do the same the moment game streaming becomes a big business on any competitors stupid enough to build around that.

Steamboxes failed because they were far more expensive than consoles, and with access to a much smaller games library than an equally priced computer would have.

That doesn’t apply to the streaming market. Amazon Luna lets you stream games from a umm… 75 game library. Xbox and Stadia have ~200 games. PS Now has 700 games, but they’re mostly obsolete trash. GeForce Now has 1k games. Steam has 6k Linux native games, and 6k which Proton is claimed to run perfectly.

Linux won’t be the limiting factor around getting a competitive library.

Would they mount a lawsuit to force companies to let people play their Steam library in the cloud?

No, of course not. Lawsuits would be silly: they take ages to resolve, and the outcomes would be uncertain. Instead they’ll leverage their near-monopoly around PC game sales into this new market. Maybe by force, maybe they’ll be a bit gentler and use non-monetary incentives. Hell, maybe they don’t even need to do get their hands dirty, and can just count on gamers to review bomb games that opt out.

Hell, maybe they don’t even need to do get their hands dirty, and can just count on gamers to review bomb games that opt out.

We’re not talking about hitting a button to make a Linux port. Developers can barely get their games out on the mainstream platforms in time. Telling them they have to also make a Linux version isn’t going to win many friends.

Sure, and odds are that this is why they’ve been investing in Proton. They certainly haven’t been doing that for the Linux desktop users.