The Surge: sci-fi Lords of the Fallen

I’ve watched videos, so I know about “the thing”. Getting Pax vWhatever to do the projectile attack is so random. Sometimes I go minutes trying to kite him around the fucking arena and he won’t do it. My understanding is that maybe Cerebus stops bringing them in eventually if you just defeat them (I’m not clear on that) but that’s tedious garbage too. I’ve gotten Pax to destroy the thingies three times but twice died to moves I had never seen before catching me off guard and I can’t even recall the third thing. And yes I’m doing the concussive drone strategy. But I usually die trying to get Pax to blow the shit up, frequently after minutes of trying and failing to get him to try and blow the shit up.

This fight is so dumb and so tedious. And the run back is occasionally subject to weird random bullshit (the first Creo security guard sometimes seems to snag me on the way by and there’s nothing I can do about that).

@Rock8man how far are you?

Not as far as you! Like I said upthread, I found the first boss, but I didn’t get past it. I went back to Bloodborne. I’ll come back to this one after Dark Souls 3, I think.

That one took me many tries. Very annoying. None of the boss fights are very good.

So I thought I digured it out. Some walkthrough mentioned “powering up the boss to shoot his thingies”. So I said “ok I’ll wail on him for a bit and he’ll just start shooting from far away I guess?”.

First attempt: first run of the day: works, but I managed to dodge into a wall next to stompy foot #2 and kill myself.

Second attempt: I got him to fall, wailed, and then went through knocking him down twice again without finishing him and he never fuckinb shot the rockets.

Third attempt: I wail on him some but before I even knock him down he deides to start shooting. Beat him and beat Cerebus. No idea why he decided to do it this time.

Gah what garbage. I did figure out why I was occasionally getting tagged in the run over to him, the two armored security in thd first toom have those shoulder mounted stunners, which are pure cheese.

Anyway I’m at Mk IV staff, Mk IV gorgon head, and two Mk IV gorgon arms I think. I got the Peacekeeper staff from my ex BFF, but I’m not sure why I would use it over what I am using. For Energy Gain, you want the highest possible percentage right (I mean, other things equal)?

I am progressing but haven’t encountered Black Cerebus yet, I am still messing around in R&D. I am looking mighty cool though with my shades I went back for after getting the poison air filter. I still can’t get in any security doors, there is gonna be a lot of stuff to go back and open eventually. I am gonna try out this new saw weapon I’ve had awhile, ugh level 1 proficiency though… Many will have to be killed to level it up, lol. 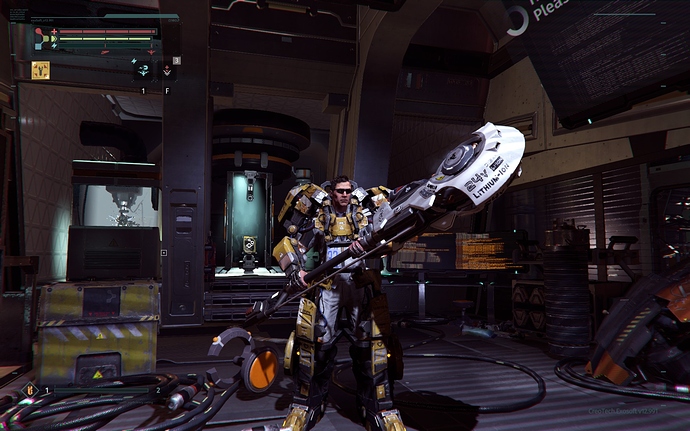 Well I reorganized my installed mods and went back to a weapon that is easier to use and leveled it up a bit. Heading up to the Executive Forum finally, after I get some security clearance.

Maybe I will just uninstall and watch the ending on youtube.

Maybe I will just uninstall and watch the ending on youtube.

But there was quite a bit of “why won’t the stupid pax bot shoot his thingy so I can get the tubes blowed up”. Couldn’t stand this fight.

Cohh Carnage is streaming The Surge 2 right now and it looks amazing.

Fucking hell glad I"m not the only one. Came in here to bitch about Black Cerebus.

I have enjoyed the hell out of this game. This is the first Souls style game that has clicked for me and I have loved the atmosphere, the combat, story, and pretty much everything about this game. Every time I have died I could tell what I needed to do to improve and felt it was fair.

Now I"m at the brick wall that is Black Cerebus. I wouldn’t mind it if I wasn’t doing complete crap damage with any one hander I try, so it takes me forever to widdle him down, and just one mistake causes a 3 hit stun lock kill unless I’ve overhealed myself in preparation. I think I’ve gotten him down to half health. All my gear is MK3, the highest I’m getting components for so far so it’s not a gear problem. I"m using a high proficiency scaling weapon with level 19 weapon proficiency. I can only take one swing at him before I have to dodge because otherwise the 2nd hit has a very very high chance of causing me to get 3 hit comboed.

The mech is also complete bullshit as well and having to try and line him up so I can get both of those tanks blown up is utterly terrible with the camera we have.

So aggravated right now. I think I’ve been on him for 3 hours with at least one break in between, it’s been so long I have 110k scrap laying at his feet (I gain ~4-5k each time I walk towards him). I have zero idea why I can’t kill him faster, all my gear is mk 3 (highest I’m getting components for).

If it wasn’t for the fact I"m 25 hours in (played through the first DLC too) and have loved everything up until now I would have dropped it, though I’m getting to the point where I still might just nuke it out of anger. I’ve never been so angry at a video game before.

Edit 45 minutes later and finally beat him. I had several times where I would have beaten him but I couldn’t line the rockets up right so he kept summoning more mechs while he healed.

Edit 45 minutes later and finally beat him. I had several times where I would have beaten him but I couldn’t line the rockets up right so he kept summoning more mechs while he healed.

I was doing the running light attack dash attack on him. It was good damage for my staff, and it helped me avoid getting caught. I only occasionally did combos and never more than 3 light hits at a time. He’s just too dangerous and dying is so frustrating not because of his (ample) health pool but having to deal with the stupid mech again.

Also, Surge 2 looks terrific, and we’re like 7 weeks out from it. It’s going to be an amazing fall.

I was doing the running light attack dash attack on him. It was good damage for my staff, and it helped me avoid getting caught. I only occasionally did combos and never more than 3 light hits at a time. He’s just too dangerous and dying is so frustrating not because of his (ample) health pool but having to deal with the stupid mech again.

Yeah I had to give up on the idea of ever hitting him more than once. I just had to do the dodge his attack, slide towards him, swing, dodge backwards and repeat that over and over and over again.

Every other boss I felt a very real sense of accomplishment after I beat them. I did not feel that after being Cerebus. I did get all his armor pieces from him though (though apparently with my current build 80 CP isn’t enough to wield all of it).

Oh well now I’m back to enjoying the game again. I definitely will need a break before getting Surge 2 though, my blood pressure can only handle so much.

Finally eliminated Black Cerebus. Would you believe I did it on the first try? Hehe or more like 2 weeks later after multiple tries… and what a long ass fight it was.

Other things I did that are spoilery: Got to enjoy some art. Hung out with the CEO a bit. Fixed a server error. Met the board of directors. And now am up in Nucleus. I should post more pics, but its hard when combat is so intense and enemies like to hide around corners.

Other than a few difficulty spikes I struggled to get over. I am enjoying this game very much. I might grab the dlc for it when its on sale again.

Other than a few difficulty spikes I struggled to get over. I am enjoying this game very much. I might grab the dlc for it when its on sale again.

I enjoyed A Walk In The Park

Finally beat the game (31:58 playtime, that includes one DLC though). That was a good time, though I doubt I’ll do NG+.

I need to go through a bit of the thread now to see about story cues I missed, cause I feel like it ended abruptly while leaving details out.

Other things I did that are spoilery: And now am up in Nucleus. I should post more pics, but its hard when combat is so intense and enemies like to hide around corners.

Where did you hang out with the CEO? I went into his office but all that was there was a recording

There is a room near his office, somewhere in the lobby area, it has recording studio equipment / green screen backdrop.

Oh the guy that hung himself? That wasn’t the CEO that was the director of PR I thought.

I’m having a lot of fun with this game. I just read the whole thread and needed to chime in because nobody had addressed my most pressing concern. That goddamned song playing in all the Ops rooms!

Not a bad song the first dozen times I heard it but I spend a lot of time in Ops. Give me a couple more tracks on the radio! Or a way to turn it off! It’s driving me mad. I’ve resorted to mute whenever I’m in Ops. It’s an absolute tragedy.

I just killed the third boss and fell into R&D. Y’all have got me worried about BLACK CEREBUS.

Oh that song drove me nuts when i played it. Especially since i heard it a lot when i died.