Not only an unexpected request filled, but Tom also fills as a bonus my request (that didn’t win) to write about diving!
Amazing treat.

PS: noted a small typo on an “attribute” midway through.

I’m pretty sure Armageddon Empires came out no more than five years ago, and you cannot tell me differently. (Or I will disappear in a puff of age.)

Had a hankering to play AE again as I am so fond of that game but kind of forgot it. Could not find my old copy so rebought it. Looking forward to playing again!

I am glad that despite the horrendous UI, resolution and some very rough edges that people still like to play the game even today. Also, if you lost your download just email my info or support email address found on the website and I will resend them. If you bought a second copy in the recent past (last month or so) I can probably still refund you through the control panel. Send me an email if that’s the case.

Tom, that first paragraph is pure poetry. Now to read the rest. :)

The two stars are just a matter of finding the interface so insufferable after all these years. Ultimately, I really like what’s under there, but if I’m going to wrassle through an Adobe Director front end, I’d just as soon do it in Armageddon Empires. Or Six Gun Saga, which is my favorite tablestop game with a Western setting this side of Shadows of Brimstone!

Unity has progressed over the last year and a half when I looked at it and now includes hex map stuff. @Vic_Davis I hope one day to send you a prototype of the basic UI and whatnot for a remake of this and provided it’s to your liking we can talk a proper remake.

I had one extraordinarily memorable game of S.I. back soon after its release. I even wrote a detailed AAR (found here, in my ancient blog: https://fenrisjaw.blogspot.com/2010/02/solium-infernum-aar.html), because these were the days when i didn’t have children and had time to write detailed AAR’s. So much to love about the game, and I’ve never seen some of the social dynamics that it achieved replicated in anything else.

I agree with @tomchick that Armageddon Empires is extraordinary, and was ahead of its time, and it still a joy to play. If only the AI could compete! Hey, just for the heck of it, here’s my detailed AAR of an AE game: https://fenrisjaw.blogspot.com/2008/02/armageddon-empires.html

@Vic_Davis, we miss you in game design! All the best luck to you in writing and whatever new creative endeavors you come up with. Your design blog and game oeuvre were a great inspiration to me.

Great review. Well written as usual. To be honest, I’m just here to remark on how disturbing that Bene Gesserit artwork is. I’ve had Lynch’s Dune in the back of my mind whenever I think of them, even when reading the books.

This is such a departure.
That is some effed up Hansel and Gretel cautionary tale shit right there.

Hey TeeCee @tomchick
I didn’t expect you to go through (interface) hell for this review, but I appreciate it nonetheless. :D

In my memory, it’s such a great game. It’s so dense with systems and ideas that evoke the theme so brilliantly. I wouldn’t want to spoil that by wrestling with the reality of the horrible tech. Thank you @Vic_Davis for making this game, and thank you @tomchick for reviving those memories with this review.

How unfun the Bene Gesserit would make a game if their ability straight-up prevented another player from winning, full stop. But it doesn’t. To win, the BG have to predict both the winning faction and the turn on which the faction will win.

Tom talks about the issue with the game with the small map that also wraps around and I can understand it, it can be pretty confusing to figure out where you are. Does anyone have an example of a map like this that is done well as a counterexample? I wonder if the problem is inherent to the map style? A typical civ style 4x map works pretty well but that only wraps east-west, but this wraps north-south as well.

Most JRPGs overworld did.
I didn’t find it confusing in the slightest in Solium Infernum. If anything it helped me locate myself in regards to others, instead of some predetermined reference the game was throwing at me.

Does anyone have an example of a map like this that is done well as a counterexample?

Only when the “map” is a playfield wrapped around a 3d globe (with unique identifiable features) you can zoom in and out from, like Planetary Annihilation.

I wanted to like the idea of Solium Inferum more than I liked the game itself.

Aside from the interface nightmare, it was so damn hard to parse what was effective strategy. In all the game I fumbled through, it seemed that only 3 demon builds had a chance.

Go all in on Charisma to start off crazy weak, but hope your high income would close the gap.
Go all in on one of the two stats that would start you off with an extra order
Go all in on evenly distributing your points to non-charisma stats to start off with the strongest possible legion, hope that carries you enough before the specialized players overtake you and your crippled growth.

Doing good? A random event nukes your strongest legion that you were pinning all your hopes on. GG, Satan!

That obtusity and sluggishness you describe are both part of the interface nightmare to me: the first one because the manual detailed all the mechanics (which is why I had printed it, in those pre-tablet days), but looking up informations over and over for what particular space of the games you were in was quite bothering, and the second… well, all those darn clicks. A Director issue that will also mare Occult Chronicles — it’s the first game where I distinctly remember experiencing physical pain to my hand because of all the mouse clicking.

Between Tom and Dan Thurot writing about Solium Infernum, I’ve been compelled to re-install it. Things are going about as expected:

I played my last game of Solium Infernum last year, and have played it a lot async since it was released. Still blows my mind that it was forged in the fires of Adobe Director because I used to use Director at uni for animations and the odd interactive piece. Making a game like this in… that.

Anyway, yeah, Solium Infernum does have a rough interface which requires a lot of clicking to access different panes of (critical) information. If you play it async then that keeps a lid on it somewhat because once you’ve done you’re turn, you’re done. In single-player I can imagine using the UI turn after turn being death by attrition.

It’s funny you mention Dominions, Tom, because I picked 4 up a few years ago and played an async game with some folks here thinking ‘Well, if I can handle Solium Infernum, I’m sure I can handle this’. Oh lordy, no. Say what you like about the SI interface, the Dominions UI felt so much more fiddly, compounded by all the army and unit micro-management. I sunk 40 hours into that one async game(!) that was eventually declared over after the first fight more or less decided the game! (We’ve just finished an Age of Wonders 3 async game and that ended similarly (the UI in that is lovely though)). In all my games of Solium Infernum they all played out fully because there’s enough concealed information and enough backstabbing and dramatic power shifts that it’s difficult to call until it’s over. I love that.

One of my favourite things about Solium Infernum though is the art and the writing. It’s all so evocative. The location icons and playing pieces, the portraits, the manuscripts, the barren ashen grey hexes, the flavour text and titles. 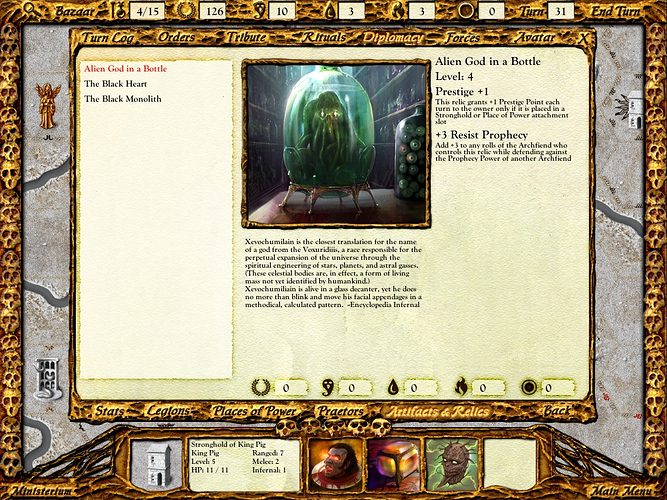 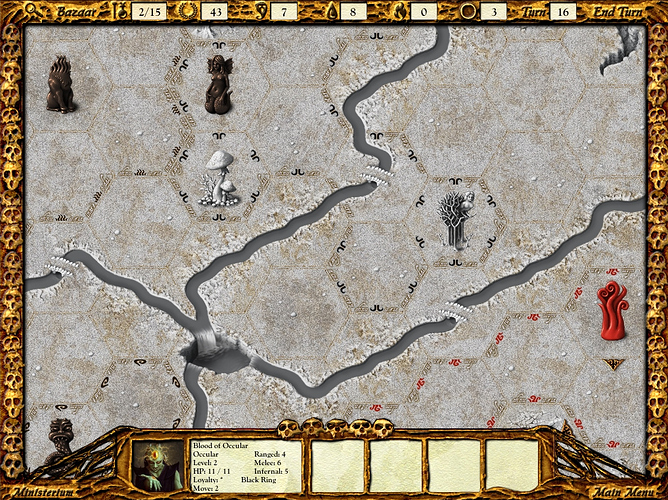