I finally finished this up and I figure it’s worth having a thread of its own, though it’s already been discussed a bit in the Netflix Thread (my first post was here). As I mentioned earlier there, the beginning of the show was a little bit of a back and forth for me between cautious optimism and slight disappointments–the latter mostly in regard to things in the comic that were cut or minimized in the show.

But I liked it more and more as it went on, and by the end I can certainly say I liked it and I’d recommend it. I think everything that was changed from the book or expanded upon was either an improvement, or at worst, a justified change to better fit TV. I don’t think I ever said “I wish they’d gone with the original version of this plot/character/event instead of <whatever>”.

There were still some things omitted from the book that I would’ve enjoyed, but I can mostly get behind this adaptation. Lest I end a recommendation on weak praise, I should reiterate that my early impressions held up and the cast was excellent across the board. I’d love to see more of their adventures, and I really hope this is back for another season or two. I don’t think the material would be served by more than three seasons at most, but I really hope we get more of this.

I started watching this last night. I was a bit put off by the use of music from Phantom of the Opera, but that’s more my general disdain for all things Andrew Lloyd Webber, than anything else. I’m only two episodes in and I’m not familiar with the comics, so I’m still struggling to get a grasp on what the rules are for this world. Planning to watch some more.

I thought it was quite good, and I hope they come back for season 2. I was pleased with the actor for Five, which had the possibility to ruin it as child actors are a gamble (granted he was teenage, I guess). It also had the best usage of music in a TV show that I’ve seen in a long time (don’t let the early Andrew Lloyd Weber put you off, iirc it’s the only one).

Hazel is the guy, right? So Hazel yes, Cha Cha not so much. Very annoying.

Surely you meant Hazel and Klaus :)

Klaus was definitely my favorite in the family. He seemed to be the only genuinely nice person.

I liked Hazel and Cha Cha a lot, though I wish they’d explained their immortality more, or at all. Like when Number 5 slits Cha Cha’s throat in an early episode in the department store, but later she gets up and continues to shoot at him. This happens again and again throughout the show, but they never did explain it. Maybe they’re not immortal, just have really strong self-healing, since they clearly imply that they can be killed.

I also love the way they make you hate certain characters. Like the cop who would rather not listen to her ex-boyfriend than to follow a lead that could have saved someone’s life. Or the general jerkiness of various family members and their blindspots.

One of the best characters was Ellen Page’s character, and the way the show makes me hate her so much in the first couple of episodes. She’s being setup as a character who clearly is very sensitive and always the aggrieved party and always ready to be the victim. And they make you think at first that she’s being setup as some kind of savior, and you’re super annoyed by that concept, that someone like her would even be a savior. But of course, the show knows what its doing, and they keep her character so consistent. Later in the season she asks someone “Did you know?” Because she’s the aggrieved party again, and of course, that’s all she selfishly cares about. Did you know? Nothing else.

Number 5 is definitely the heart of the show. I was never in love with him or hated him, but never could take my eyes off him. The early scene where he skips forward through time is one of the most memorable in the series and was extremely well done.

Overall, a wonderful series. I was very hesitant after the first episode, but I’m glad I stuck with it. This is no bore-fest like Marvel’s Netflix TV series like Daredevil or Jessica Jones. This is a well told story with fantastic music and sound work and beautifully choreographed and shot visuals. And they found a fantastic cast that really make all the flawed characters come to life.

I was very surprised at how much I liked this! I had no exposure to the comics at all, but I really dig the show. It’s like Watchmen crossed with X-Men.

I liked it but it never really grabbed me like I thought it would. I’m not sure why? Overall, I’d say it was worth watching but it’s not something I’m likely going to watch again, and I’m not even sure I’d watch a second season. Just maybe not quite what I was hoping it would be.

I’m on the 5th episode watching this me my daughter and we both love it. Agreed Klaus is the best character with Hazel a close 2nd and the kid who plays number 5 is very good.

I think it does a better job than other shows and movies in portraying how being a super hero might not be such a good thing.

One thing I’m really surprised never came up during the series is that in the initial setup the patriarch of the family said 32 children were born on the same day, or something like that. And he was able to get 7 of them. So I was just always expecting to find out during the series what might have happened to the other children that he wasn’t able to get. You’d expect them to have powers too, perhaps. Unless it was something the patriarch did in addition that led to the powers. (Which is also possible).

You’d expect them to have powers too, perhaps. Unless it was something the patriarch did in addition that led to the powers. (Which is also possible).

I kept waiting for this as well. I think the number was in the 40’s, so over 30 kids might be out there with powers, I assume that’s a topic that gets tackled in the comics or something at some point.

I thought it was quite good, and I hope they come back for season 2. I was pleased with the actor for Five, which had the possibility to ruin it as child actors are a gamble (granted he was teenage, I guess). It also had the best usage of music in a TV show that I’ve seen in a long time (don’t let the early Andrew Lloyd Weber put you off, iirc it’s the only one).

I enjoy the comic, and it’s short enough it’s not much of an investment to read it. Right now there are two six issue volumes, Apocalpyse Suite and Dallas. Netflix season 1 covers more or less the main story of Apocoalypse Suite, while mixing in a good chunk of Dallas without actually dealing with the central conflict/threat of that story (for example, Hazel and Cha-cha don’t show up until Dallas in the comics). So you might as well just read both if you’ve got a couple hours to kill.

I think the comic and the show each have something the other lacks, and my suspicion is that most people might like the show better. There are some key changes to the story—swapping out a character here and there in some pivotal moments—but even in the storylines that don’t stray far from the books, the show spends a lot of time filling in gaps in motivations and relationships that the comic doesn’t slow down for. It’s the rare case of a Netflix show that feels improved by moving a little slower.

And the comic on the other hand, as I’ve said elsewhere, brings a lot more fun sci-fi “wackiness” to the world. To its credit the show embraces more of the insanity of the comic than I expected, but it still doesn’t go nearly as far as the comic. For example, Number Five’s handler isn’t a blonde woman in the comic, it’s this fish: 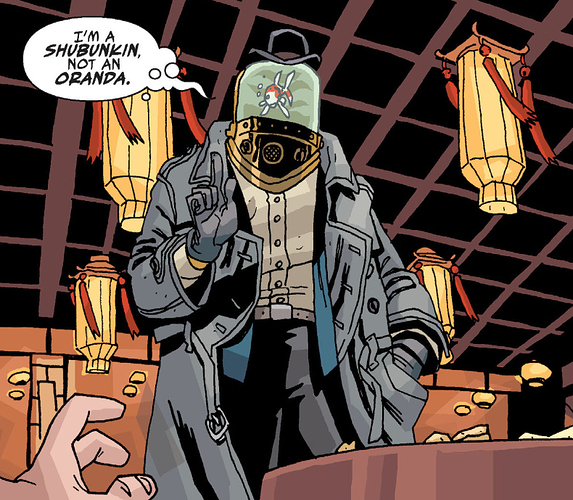 It isn’t addressed in the comic either (at least not yet, there’s a third volume in the works).

Number Five’s handler isn’t a blonde woman in the comic, it’s this fish

Does the fish speak Yiddish in the comics? It was an endearing trait of The Handler in the show. 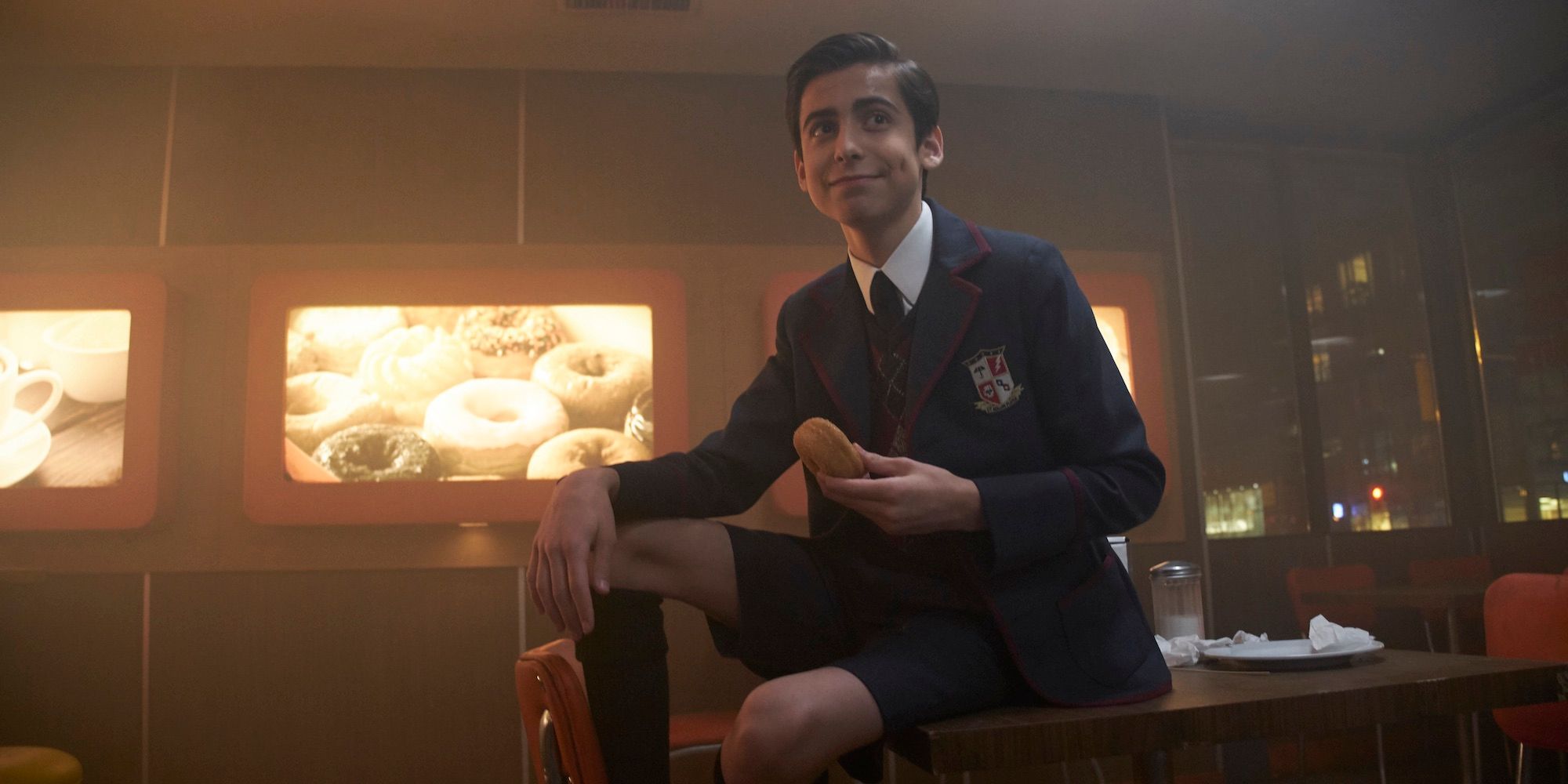 After Ars Technica’s negative review I wasn’t expecting to like it, because they harped all over the shows short comings, which read like a critique of the Marvel/Netflix series. But half way through I am enjoying more than I thought I would.

I could listen to Hazel’s voice all day. He seems so friendly and introspective until the mayhem starts up.

I could listen to Hazel’s voice all day. He seems so friendly and introspective until the mayhem starts up.

He has a very distinct voice and way of speaking. I didn’t recognize him by his face, but when Hazel started to talk I immediately went “Now why does he sound so familiar?”. A quick IMDB stroll helped me remember that Cameron Britton had played Ed Kemper on Mindhunter.

For anyone other than me that watched Stitchers, I was shocked when I looked up Hazel on imdb and saw he was a regular on it.

I’ve never seen Mindhunters, but I did hear Hazel was in that. I’m tempted to watch just for him.

Ditto. Part of it is that it’s made out of recycled parts. After the first couple episodes I was thinking, “They’re not just gonna straight-out rehash those two famous X-Men storylines, are they?” and … yes, they did just that.

Not that the X-men were the only thing pilfered. You could make a good drinking game by swigging every time you spot a recycled part. Oh hey, those assassins are wearing Pulp Fiction outfits - and there they are in a forest straight out of Miller’s Crossing. Oh hey, that simian servant is from Alan Moore’s Tom Strong. Oh hey, here’s the 6758th science fictional agency tasked with straightening out timelines. Etc. etc.

None of which would matter if it was clearly improving upon or making novel commentary on the tropes it was ransacking. But it mainly settled for just repeating them. A decade or two ago that would have been fine. (See: season one of Heroes.) But in 2019 we’re inundated with superhero stuff everywhere. We’ve seen both the original tropes and the commentaries on the tropes multiple times. I need a more inventive deconstruction of the nature of superhero narratives than, “You know, a guy who collected mutants like bugs probably wouldn’t have been much of a father.”

And yet: all the characters had nice strong arcs and reasons for being, even if some of them (e.g. the “good son’s”) were more sketched out than fully realized. Some of the actors (e.g. the kid, Hazel, or for that matter the actress given the thankless task of playing the mom) were quite good, and the ones that weren’t outstanding were perfectly fine. By the end, I was glad to have made all the character’s acquaintance, even if I didn’t find them terribly surprising.

I could have forgiven more if the whole thing wasn’t ruined by the terrible, horrible, no-good ending where they said, in essence, “You know how we’ve carefully established either option A or option B for the end of this season? Well, we’re not doing either one. We might get a season two, so we’re just gonna stall for time. See ya!” And in literally the last minute of the show, to boot.