Honestly, the complaints about recycled parts, while I understand them, didn’t bother me in the least. A couple reasons:

But like you said the strength of the show was the characters and IMHO that’s really where any superhero fiction lives or dies. (I mean once you have time travel then causality goes out the window so the plot becomes kind of arbitrary.) And I think they did a really good job with that, with Hazel and Cha Cha’s evolving relationship and Klaus’ story and even having Luther be repeatedly boneheaded.

As for the ending, I guess it didn’t bother me because like I said once there’s time travel I sort of accept that the writers can do whatever they want.

So in summary I guess we were looking for different things out of it. :)

As for the ending, I guess it didn’t bother me because like I said once there’s time travel I sort of accept that the writers can do whatever they want.

Yeah, agreed. I thought the beautiful sentiment behind the ending was more important than the time travel. The idea that this will always happen as long as Vania is this person. We have to go back and treat her differently and change our behavior towards so she never becomes this person. I really found that to be a wonderful idea that rang true with everything we saw of Vania.. Of course, that works for me because I viewed Umbrella as this self-contained story with a beginning and an ending. Since they’re going to have a season 2, I have no idea if this is a good premise for a continuing story.

The show made the ending both better and worse than volume one of the comic.

I think the way the show handled Vanya specifically was a brilliant improvement over the comic, but the moon was more clumsy on the show. I’ll spoiler parts of this for anyone who wants to read the comic on their own.

In the comic, Vanya is dealt with by Number Five shooting her in the head while she’s distracted in the final fight. She lives, and regains consciousness eventually, though she can’t remember who she is (or anyone else), she’s paralyzed, and maybe a little brain damaged. She’s around in the second volume, but doesn’t play a major role.

In the comic Vanya’s destructive power is also tied to her music, but I don’t think it was explicitly tied to her focusing on sound and somehow channeling or amplifying that. I’m pretty sure in the comic her destructive power came from within and just took the form of her music, whereas in the show she was sort of repurposing what she could hear, and so in the end she was using her own music but we had seen her doing that with the wind, with her heartbeat, etc.

So I thought Allison deafening her with a gunshot was a brilliant way to disrupt her power, and specifically Allison being the one to deal with her and in that way felt more true to the relationships developed over the course of the show. She was the one closest to Vanya, closest to salvaging their relationships, and she found a way to stop Vanya without actually shooting her.

But then there’s the moon: Long story short, in the comic Vanya at that point has been pushed over the edge and really is ready to destroy the world; in the show she’s reckless with her power but it really seems like she’s only out to get her revenge on the Umbrella Academy. Hitting the moon and triggering the world-ending cataclysm looks like an accident on the show, an unintended consequence of her losing control of her power. While it was a pretty cool visual, I think the show would’ve been better just skipping that and removing the need for last minute time-travel escape in to “resolve” it.

In the comic, Klaus has a lot more powers throughout the series. He’s not only able to communicate with the dead, he can also possess living people, and he’s telekinetic. Also he can only do all of this if he’s barefoot. ¯\_(ツ)_/¯ He mostly uses his telekinesis in small ways like floating around instead of walking, and the big shock in the finale is that none of them realized how powerful he truly is until he stops the entire moon chunk from hitting the Earth. Still a bit of a deus ex machina, but no time-travel shenanigans that potentially invalidate things that have happened so far.

All in all I was pretty pleased with the finale, but I sympathize with everyone who wishes it didn’t end on a time-travel deus ex machina.

Just finished this tonight and really enjoyed it. I ignored it at first since the trailers made it seem like some sort of derivative YA X-Men joint that we’ve already seen plenty of times. However, after hearing some buzz from coworkers, I am glad I checked it out. Watchmen meets Wes Anderson by way of Tarantino. I appreciated that they introduced a bunch of things very matter of factly with little explanation (#1 on the moon, Pogo) with later clarification in some places but none in others. I would like some more of the backstory and backgrounds fleshed out in S2, not because I need to know, but because I am interested in the characters and where the story goes (or went).

Has anybody read The Annihilation Score by Charles Stross? There’s a certain similarity to the ending including a white violin…. Not saying anybody copied anybody, but it’s weird.

I haven’t, but the Umbrella Academy graphic novel predates that story by several years.

I thought this was a terrific show. I didn’t know anything about the comic or any comics it might have borrowed from. Klaus was a great character so hats off to the actor, and Five was also great and it amazes me he was a 15 year old.

Was thinking the same thing.

The casting director was -undoubtedly- a fan of Misfits, still one of the best Superhero series in my opinion. Haven’t seen Robert Sheehan in a lot of other series since then though.

Just finished this tonight and really enjoyed it. I ignored it at first since the trailers made it seem like some sort of derivative YA X-Men joint that we’ve already seen plenty of times. However, after hearing some buzz from coworkers, I am glad I checked it out. Watchmen meets Wes Anderson by way of Tarantino. I appreciated that they introduced a bunch of things very matter of factly with little explanation (#1 on the moon, Pogo) with later clarification in some places but none in others. I would like some more of the backstory and backgrounds fleshed out in S2, not because I need to know, but because I am interested in the characters and where the story goes (or went).

I liked the characters and the story too, but I did wish more of the unanswered questions were answered.

Who commissioned the Commission? Why do they care about whether the Apocalypse actually happens, as well as the rest of the timeline? Where did five take the family? More Pogo backstory. More Hazel and ChaCha backstory. What about the other 36? What happened to make the 43?

I get that the focus is on the dysfunctional family dynamics, but there were just so many threads just left there that the ending felt really incomplete in a lot of ways. I suspect the Daddy scene in ep 10 was part of trying to address this, but it left a lot to be desired, and actually could have been left out rather easily and was a bit weird that that was the only stuff put in about that question.

Oh, and I would have loved more of the kids’ escapades. I don’t know why, but those black masks with the white eyes were just so freaking cool with the kids’ outfits. 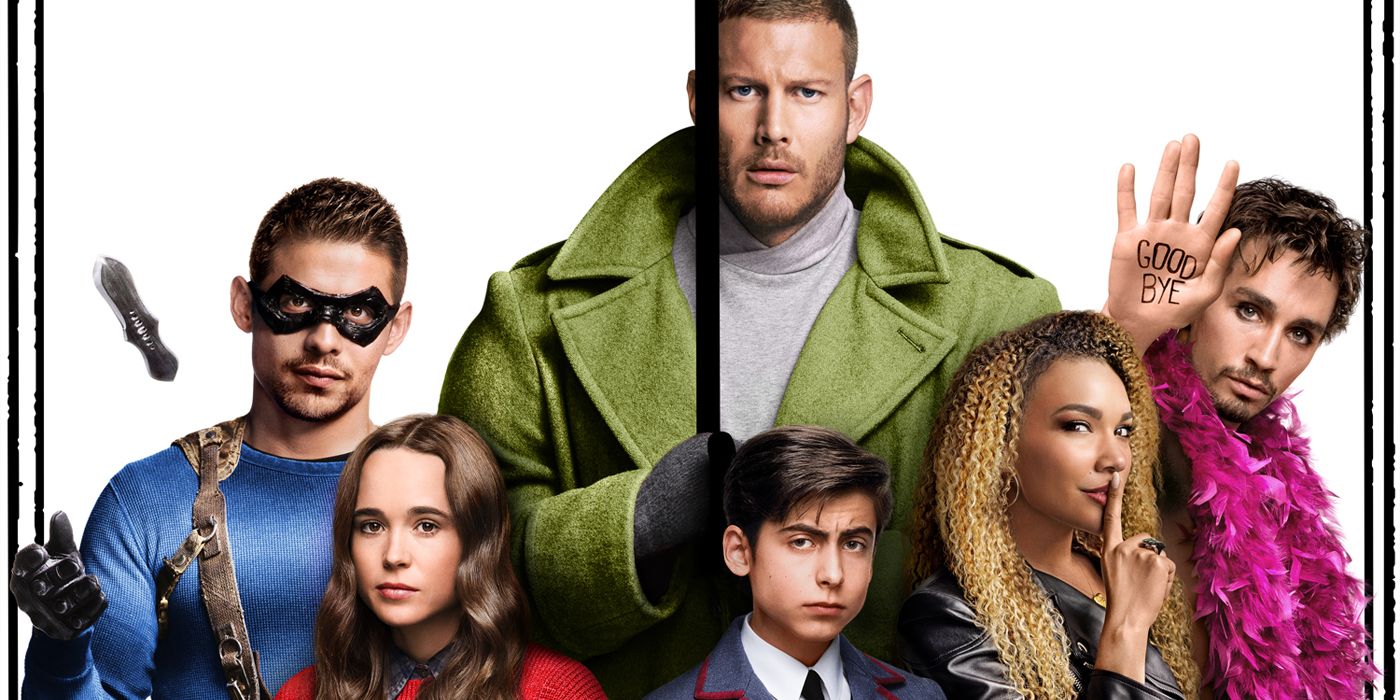 On the one hand, yay! More time with these characters.

On the other hand, more chance for them to fuck up what was a pretty good self-contained story.

On the other hand, more chance for them to fuck up what was a pretty good self-contained story.

That’s okay, I know I’m an outlier on these types of endings. I thought it did a great job of wrapping up the story they were telling. I think all good endings should be slightly open-ended. But it doesn’t mean you have to continue them from that point onward. Because then it’s not just a slightly open-ended ending anymore. Then it becomes a cliffhanger ending.

A series I really liked, Terriers, had that kind of ending. I was disappointed that it didn’t get renewed but they crafted the ending of the first and only season, so that while you got closure for most of the seasons events, it set up a great starting point for continuing the series as well. The ending of Umbrella Academy works a lot like that.

I must say, this is really inferior to the TV show. But that also makes sense. The comic is so short. I only read for 5 minutes last night, but it covered most of the first episode of the TV show. So 5 minutes vs 45 minutes, it’s not surprising that the TV show is a lot deeper and has a lot more material.

I had exactly the opposite reaction. This was boring, those were great.

Yeah I thought Daredevil was great. JJ on the other hand had issues. They tried to stretch a 6 episode story into 13, and the filler was crap. Because of that I had a hard time getting through it. I liked the basic story and both Ritter and Tennant were great together but the rest of it just dragged.
The Umbrella Academy seems to be the right length for its story and the side stuff had interesting characters like Hazel and Cha Cha.

See, that’s what I didn’t like about it. There’s about 2 hours of story in the 10 hours of show, if you ask me. But we all have different levels of tolerance for a show to get around to the point.