This thread used to be called Your Top Four “War Films”?, but it has kind of moved past that to become a discussion regarding what exactly a War Film is, what makes them succeed or fail at their stated goals, and ruminations on these themes. As well as a place to discuss specific “War Films” in depth.

Please anyone, feel free to post your Top Four, still as it is a wonderful jumping off point for discussion. The thread title was merely changed to embrace what the thread has become.

Directed by Stanley Kubrick. With Kirk Douglas, Ralph Meeker, Adolphe Menjou, George Macready. After refusing to attack an enemy position, a general accuses the soldiers of cowardice and their commanding officer must defend them.

Directed by Sam Peckinpah. With James Coburn, Maximilian Schell, James Mason, David Warner. A German commander places a squad in extreme danger after its Sergeant refuses to lie for him.

Directed by Francis Ford Coppola. With Martin Sheen, Marlon Brando, Robert Duvall, Frederic Forrest. During the Vietnam War, Captain Willard is sent on a dangerous mission into Cambodia to assassinate a renegade Colonel who has set himself up as a...

Starship Troopers
“Naked force has resolved more conflicts throughout history than any other factor. The contrary opinion, that violence doesn’t solve anything, is wishful thinking at its worst. People who forget that always die.”


The English Patient
“There is no God… but I hope someone watches over you.”

Directed by Anthony Minghella. With Ralph Fiennes, Juliette Binoche, Willem Dafoe, Kristin Scott Thomas. At the close of WWII, a young nurse tends to a badly-burned plane crash victim. His past is shown in flashbacks, revealing an involvement in a...


Three Kings
“The way it works is, you do the thing you’re scared shitless of, and you get the courage AFTER you do it, not before you do it.”

Directed by David O. Russell. With George Clooney, Mark Wahlberg, Ice Cube, Spike Jonze. In the aftermath of the Persian Gulf War, four soldiers set out to steal gold that was stolen from Kuwait, but they discover people who desperately need their...

Directed by Joel Coen, Ethan Coen. With Jeff Bridges, John Goodman, Julianne Moore, Steve Buscemi. "The Dude" Lebowski, mistaken for a millionaire Lebowski, seeks restitution for his ruined rug and enlists his bowling buddies to help get it.

Who knew the late 90’s were such a great time for war movies?

I was going to submit a list but I can’t compete with the effort you guys have made. :)

Okay, how about these…

Directed by Stanley Kubrick. With Matthew Modine, R. Lee Ermey, Vincent D'Onofrio, Adam Baldwin. A pragmatic U.S. Marine observes the dehumanizing effects the Vietnam War has on his fellow recruits from their brutal boot camp training to the bloody...

Dr. Strangelove or: How I Learned to Stop Worrying and Love the Bomb (1964)

Full Metal Jacket is already mentioned above, so…

Directed by Brian G. Hutton. With Clint Eastwood, Telly Savalas, Don Rickles, Carroll O'Connor. A group of U.S. soldiers sneaks across enemy lines to get their hands on a secret stash of Nazi treasure.

Directed by David Lean. With William Holden, Alec Guinness, Jack Hawkins, Sessue Hayakawa. After settling his differences with a Japanese PoW camp commander, a British colonel co-operates to oversee his men's construction of a railway bridge for...

Oh, this one was mentioned, too, but not linked so purdy-

Directed by Ken Annakin, Andrew Marton, Bernhard Wicki. With John Wayne, Robert Ryan, Richard Burton, Henry Fonda. The events of D-Day, told on a grand scale from both the Allied and German points of view.

Besides “The Longest Day,” a special award to these three for historical accuracy:

Directed by Ron Maxwell. With Tom Berenger, Martin Sheen, Stephen Lang, Richard Jordan. In 1863, the Northern and Southern forces fight at Gettysburg in the decisive battle of the American Civil War.

And a favorite, because it’s a goddamn great movie:

Directed by Ridley Scott. With Josh Hartnett, Ewan McGregor, Tom Sizemore, Eric Bana. 160 elite U.S. soldiers drop into Somalia to capture two top lieutenants of a renegade warlord and find themselves in a desperate battle with a large force of...

Master and Commander: The Far Side of the World (2003)

Directed by Peter Weir. With Russell Crowe, Paul Bettany, Billy Boyd, James D'Arcy. During the Napoleonic Wars, a brash British captain pushes his ship and crew to their limits in pursuit of a formidable French war vessel around South America.

Directed by Lewis Gilbert. With Alec Guinness, Dirk Bogarde, Maurice Denham, Nigel Stock. On the H.M.S. Defiant, during the French Revolutionary Wars, fair Captain Crawford is locked in a battle of wills against his cruel second-in-command Lt....

I like your choices. You wouldn’t happen to be a C.S.Forester/Patrick O’Brian fan, would you?

Dammit, Rubin already got Master and Commander, which is like my favorite movie evar, so I’ll go with this:

I like your choices. You wouldn’t happen to be a C.S.Forester/Patrick O’Brian fan, would you?

I’ve read all the Hornblower books and one of the Aubrey/Maturin books (I know I need to read the rest but they’re expensive, yo). So yes, absolutely. If I could add a fifth I’d likely add the live action Hornblower films from the late 90s.

Dammit, Rubin already got Master and Commander, which is like my favorite movie evar

OMG is so good.

I very much recommend the Aubrey/Maturin books, I liked them much better than the Hornblower books. I think partly because I like Jack Aubrey and Stephen Maturin much more as characters, they’re much more relatable as people. Hornblower’s whole idiot savant thing with naval tactics is weird, and he hates music? boggle

I did very much enjoy the Hornblower TV series that starred Gruffud.

How dare you besmirch the good name of Horatio Hornblower! Pistols at dawn!

Uhg, show up late and most of my besties are already on the list.

Directed by Ken Annakin, Andrew Marton, Bernhard Wicki. With John Wayne, Robert Ryan, Richard Burton, Henry Fonda. The events of D-Day, told on a grand scale from both the Allied and German points of view.


If nothing else for the amazing set piece at Ouistreham.

Directed by Dick Powell. With Robert Mitchum, Curd Jürgens, David Hedison, Theodore Bikel. During World War II, an American destroyer meets a German U-Boat. Both captains are experts, and so begins a deadly game of cat-and-mouse.

I think the books are good, but I find Hornblower himself to be … weird.

Good call with Enemy Below! I love submarine movies.

This is kind of off topic (but it’s how I roll, what can you do) but my manager sent me a link about a submarine commander who knew he was being assigned to a specific model sub and spent a year studying up on it, then finds out he’s being assigned a completely different model and only has a month to familiarize himself. He realizes he can’t be an expert in all systems so he works out a method of delegating all commands except missile launch to officers over each area, and trusts they will know how to do what needs doing. It’s kind of a good study in hands-off, non-micro management style.

I very much recommend the Aubrey/Maturin books 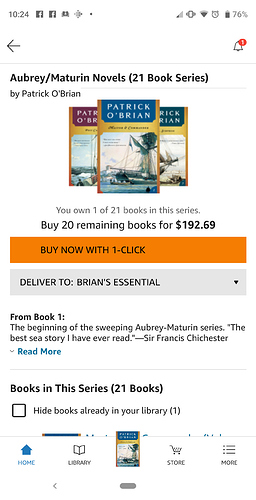 Get a library card, dude!

Get a library card, dude!

For…actual, physical books?! Do I look Amish to you?!