I got my good Ciri ending during my last XSX playthrough and I’m good with that. Got tons of side missions and both DLCs to go with.

Good point, Hearts of Stone far exceeded anything in the main game, for my tastes. Could always just replay that.

One of the reasons I almost immediately replayed it back in 2015 is because I got the bad ending on my first play through.

I too got the bad ending the first time

Same. Ditto. I got the bad ending.

Except after replaying it and getting the good ending, I soon realized I definitely prefer the bad ending. I think the bad ending is actually the absolute best ending. And not just for The Witcher 3, but also in comparison amongst a myriad of games have I played to completion.

It’s so…bittersweet, and totally The Witcher. Going directly into Heart of Stone afterwards also helped as a sort of shellshock therapy.

Assuming all non-graphical mods will work in the updated version (which is probably not the case, but lets go with it), what would people recommend?

Ghost mod was well done if you wanted a combat overhaul that wasn’t solely focused on being crushingly difficult (it can be if you choose to modify it as such). I think she stopped updating it a while back, so YMMV.

For all of you that mention ‘needing to play the DLCs’. YES, YOU MUST DO THIS. It doesn’t matter if you last played the main game years ago - if you aren’t considering a full replay, that’s absolutely fine but you must must must play the DLCs. The main game was obviously great, but the DLCs put it crazy over the top. Best two NPCs in the whole game are here.

If you are flexible with your head-canon, I’d suggest going for the bad ending of Blood & Wine just for the feels. Then immediately reload to the appropriate point and do one of the other endings to cleanse your mind (I personally feel the ‘mid’ ending is the right one). It isn’t too much that you have to replay to get the different endings.

With multiple endings, I tend to play the one I find most natural, and then watch the others on YouTube. That’s served me well, given limited time for full replays of longer games.

Although I am tempted with this game…

That’s usually how I do it as well. However, since the amount of replay wasn’t too severe, I took a gamble to see the ‘bad’ ending, and I’m so glad I did. Wouldn’t have had the same impact for me just via YouTube (especially since I think the gut-punch is from seeing it first and thinking ‘dear god, there is no way I end it like this’).

I was so pissed when i got my bad ending during my initial ps4 run because i didn’t feel like I did anything “wrong”. And when I looked the crucial choices up online, I was like, “Seriously?! Have a fucking snowball fight after I just had my ass handed to me for 20 minutes?!” So that’s what I did for my XSX playthrough (among other things) to get my better ending.

I felt the same way. And in my case, it was exactly the snowball thing that threw me into the bad ending on my first playthrough.

For the record, when you make the decision, you don’t know it’s going to lead to a snowball fight. I think the actual choice is whether to get drunk or something, and that’s what leads to the snowball fight? I can’t recall, it’s been 7 years. But yeah, I also didn’t choose the snowball fight. But that was much farther back in the game. The decision that takes place much closer to the end of the game is whether to let Ciri mess up the guy’s lab or not. Changing that decision changed the ending for me, so that’s how far back I went. There’s not much to play after that decision to get to the ending.

Remember, video games are just tools we use to affect our brains. The only important thing about a game is how our brain perceives it. Any choice, even a false choice, affects our perception of the game. All choices matter, even if they don’t affect your stats.

The difference with The Witcher 3 is that all of the most important decisions are hidden in plain sight. They seem like false choices, but they directly change the ending. Your words have enormous importance to your child, but they seem irrelevant to you. It’s exactly like …

I have two kids. It has been endlessly frustrating to me how bad a job pop culture, especially video games, does depicting this fundamental human experience.

The Witcher 3 is the first game I’ve ever played that really engages my parent brain. When Ciri came to me for advice, my experience raising my own daughters had an affect on what I chose.

Yes, it can be unfair. You can think you’re doing or saying the right thing, and it all falls apart. Welcome to parenthood.

I think this is cool and unique, and I wanted to make sure it didn’t pass without comment. It’s a shame it all happens so late in the game, because it’s really well-crafted. 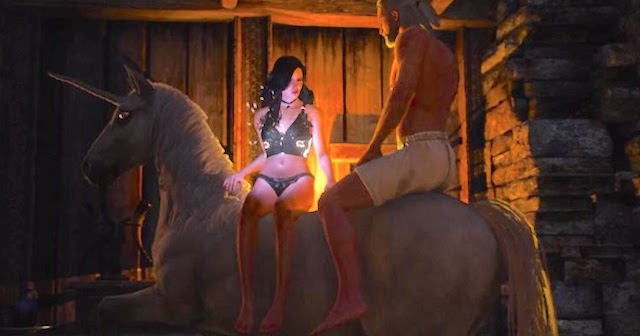 The Witcher 3 Is Amazingly Written, and People Should Talk About It More.

The three best-known characters of The Witcher 3: Wild Hunt. (There are light spoilers ahead for The Witcher 3, starting about halfway t...

Procrastination wins again! For whatever reason I only played about 5 hours of this a couple different times. Looking forward to finally diving into this for a real go round.

A big part of the reason I loved Witcher 3 so much was because I got the bad ending first. The balls to give me that ending after playing their game for a hundred hours, and the fact that it follows through on the dark themes of the game, makes it a better and more cannon ending than the others. I enjoyed getting the sweeter ending on a second playthrough, but it ultimately feels like a dream Geralt is having on his deathbed than a true conclusion.

And the fact that the choices in the Witcher 3, with Ciri and elsewhere, aren’t cut and dry and often backfire goes against the common wisdom of choice in rpgs in the best way possible.

I’m super stoked for this. I’ve played W3 3 times now, but never beaten it… I always burn out before I get to Blood and Wine

This time I’m going straight for the DLC

Both of the DLCs are freaking amazing.

this makes the fact that Inquisitor Martyr is trying to charge for the next-gen update even more annoying.

The balls to give me that ending after playing their game for a hundred hours, and the fact that it follows through on the dark themes of the game, makes it a better and more cannon ending than the others. I enjoyed getting the sweeter ending on a second playthrough, but it ultimately feels like a dream Geralt is having on his deathbed than a true conclusion.

Yeah, I sort of dislike the good ending because it is is just your bog standard happily ever after Disney fantasy story ending. The bad ending makes more sense within the setting, and I thought about it long after playing.

I sort of compare it to a little indie movie called Toad Road. The Witcher 3 bad ending is the Toad Road ending.

This is an excellent take, actually, and perfectly explains why my son and I had such differing opinions about the ending (and how you get to the various endings). I didn’t fully appreciate the why until reading that.