There are too many Warhammer games

It’s even harder to figure out which ones aren’t the crappy ones since GW will license to anyone these days:

There Are Too Many Warhammer Video Games

Back in 2016, Mike wrote a blog called “There Are Far Too Many Warhammer Games”. In 2021, things have only got worse. 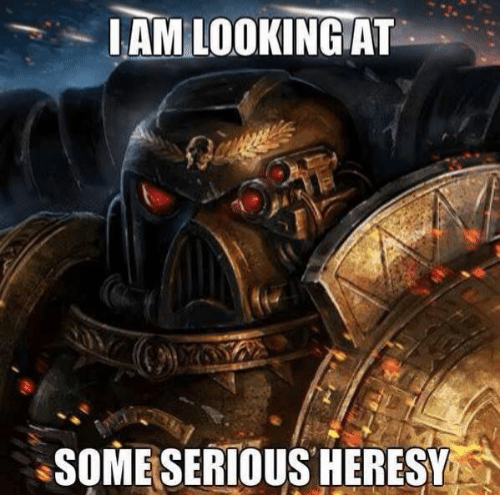 As much as I love Warhammer video games I tend to agree, while there have been a lot of great ones like Gladiius, Inquisitor and Battlefleet Gothic Armada, there have also been so many duds like Dakka Dakka and Deathwing and Chaosbane and Eternal Crusade and…

Yes, there have been some good ones, but the license is spread around like fertilizer.

And yet simultaneous there aren’t enough Warhammer games, heh. The failure of Dawn of War III really strings there in that regard. Still waiting for another good Warhammer 40,000 real-time strategy game. Considering games like Total War: Warhammer and Vermintide have basically been carrying the Warhammer (Fantasy) brand I would still say it has been a net positive for me. Says something when Games-Workshop revives a world\setting they destroyed to create Age of Sigmar.

Considering I barely game on mobile devices you could probably cut that list by at least a third for me. Which still leaves a decently long list but for the number of enjoyable games that make up the list the ratio of good to bad is pretty decent, IMO.

Given how many platforms and genres exist in gaming averaging a touch over 9 releases a year is probably about to be expected, and many of those are either direct or spiritual sequels for 2021 too.

Is Dawn of War III just terrible/avoid at all costs? Because that is the current air that surrounds it.

Is Dawn of War III just terrible/avoid at all costs?

IIRC, they tried to make it a moba-like esports thing and failed miserably.

That’s a heavy bane on the RTS, a dead genre…alas.

Unlike CRPGs I think RTSs can not be saved by kickstarter…

I am getting MORE good-to-great Warhammer games now when the license is handed out to all developers than back in the days when Games Workshop was miserly with it. So keep it rolling.

That said, ignore most of the mobile games but that holds true with mobile as a platform anyways.

I had a great time with Chaosbane; it won’t compare favorably to Grim Dawn and such, but it reminded me of the old Dark Alliance aRPGs from the PS2 era and got me back in that mindset…also had fantastic boss battles. I initially passed on Deathwing, but recently reinstalled since I heard that the patches and updates actually got it into a decent spot to spend some time with. So even the 6/10 or 7/10 games can be quite enjoyable as the lore and aesthetic helps to elevate gameplay that might not work as well with a non-Warhammer license.

Oh, I also re-installed Necromunda Underhive Wars which I quite enjoyed back when it released, but put aside due to some bugs and jankiness. Soon after I played Cyberpunk 2077 and hoooo boy that put things in perspective and made Necromunda look like the Sistine Chapel.

Age of Empires 2 came back from nowhere and saved the RTS genre, so you can try that.

But yea, basically Dawn of War 3 is just… so bad. Even though i loved DoW 1 and 2 (in different ways), 3 is like taking the worse elements of all them instead of the best.

If I cared about playing Age of Empires 2…

This isn’t a pick a RTS game thread, but you might try Homeworld Deserts of Karak if you prefer sci fi. Of course Starcraft 2 is still out there.

I already played them.

And I agree. Ignore my melancholy about RTS games.

Forget about it. But a fork in it. It is done.

Yea i’m kind of lost in the sea of Warhammer. There are a ton of these very… obscure feeling FPS or third person shooter games right now, from developers i’ve never heard of, that get lots of 75 to 80 scores, and that don’t seem to really… catch on all that much. I know that Fat Shark who made the very weird and kind of broken Krater (basically a post-apoc Swedish setting, which feels kind of neat), made the Vermintide games, so it’s neat to see them doing well (i guess?), but it’s just a shotgun of 2nd level devs right now.

Is Dawn of War III just terrible/avoid at all costs? Because that is the current air that surrounds it.

Well it definitely wasn’t my cup of tea unfortunately. Apparently that was a common enough opinion that the game never saw the levels of support that Dawn of War and Dawn of War II received. The reception was dire enough that it didn’t even survive long enough to get an expansion. Which is saying something when the base game already had teasers and hints for what was in the pipeline, a new faction if I remember rightly.

Dawn of War II might have been divisive for plenty of fans of the first game due to the change in direction but at least that was a solid, enjoyable game that managed to carve out its own niche.

The third game was hardly a technical mess on release or anything of that kind of sort, if I remember correctly. It was just thoroughly rather “Meh” as an experience in my opinion. Possibly the worst sin to commit since having to rework your whole game’s core structure/design can be a much tougher job than just fixing up some technical flaws, something Paradox would know a thing or two about after Stellaris and Imperator: Rome.

Tried to please both side of the fanbase (DoW1 vs DoW2) whilst borrowing too many notes from Starcraft 2 and MOBAs and struck out pleasing no one (in terms of commercial viability) in the end. Couldn’t even please the people who would have just been satisfied with a visually cool sci-fi/40k game since they sacrificed stuff like the awesome, over-the-top sync kill animations to the altar of Starcraft 2 eSports.

Dawn of War was carried a lot by the silly setting - i’d never even heard of Warhammer 40k, not really, until Dawn of War. I mean, i think i did as a high school kid, but it was obvious that Orks in Space is just… pure nerdery… even to a nerd like myself back then, and had basically forgotten it existed until the Dawn of War franchise. But the faux-seriousness of later 40K compared to the jovial soccer hooliganism of early 40K seems pretty striking, but that’s what happens to these corporate franchises that last for decades and have dozens or hundreds behind the scenes hammering away at them. (Though the Horus Heresy stuff is still pure comic nerdery nonsense still, Battletech had a far more engaging setting backstory.)

Dawn of War as a franchise is bolstered by an incredible soundtrack, and arguably Dawn of War 2 has one of the best RTS soundtracks of all time. The miniature level of clear detail in Dawn of War 2 goes a long way to carrying the gameplay and makes it a joy to play even while the actually gameplay is a bit of a dog chasing its own tail.

The Relic 3rd person Warhammer 40K was also pretty awesome, though perhaps not quite as robust in the end, but that whole intersection of grimdark nonsense seems pretty fun there.

Black Lab Games following up the rather brilliant imho WEGO Battlestar Galactica Deadlock with the announcement of yet another TBS wtih Warhammer: 40,000: Battlesector was a bridge too far for me.

There are so many unexplored settings they could have turned to and put WEGO to use, it’s just not a game mechanic that in my view gets used enough.

So yeah, I’ve had more than my fill of warhammer, but then I was never much of a fan to start, I like Gladius because it’s a rather well executed fun game for co-op, I tolerate the fact it’s warhammer.