There will be no cigar-chomping or vaping in Gears 5 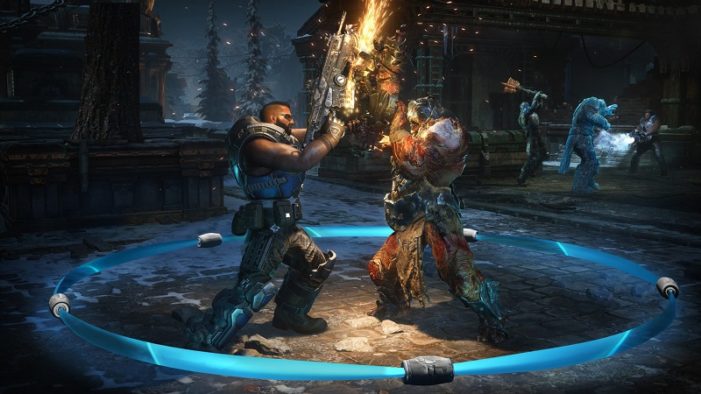 But I thought video games and what I saw on screen in no way influenced my real world behavior? ;)

Because the worst thing in GoW is smoking.
Gears of War 10 has removed killing thanks to a partnership with someone else.
Kids aren’t supposed to be playing this game anyway.

I mean, these games are extremely violent. It’s pretty silly.

When I live in an alien ravaged world and have an expected lifespan of maybe 30 years due to rampant alien munching I’m gonna take up cigar smoking like a cross between George Burns and Wolverine and enjoy the hell outa a few puffs in between murder-fests.

Who needs a modern PMRC when the companies do it for us! Tipper Gore can relax!

But what about loot boxes? Neo-gambling? Designing a grind to maximize advertising/monetization of in-game purchases, and threatening to blackball users who don’t comply?

Just more proof that the world is insane.

Nobody playing the test today?

I set it for download last night. But I don’t know if I’ll get the opportunity to play it tonight or not.

I suck badly at the team mechanics of this game and had a great time with it. Can’t wait for the campaign tho

The only game that I can think of that has smoking as a mechanic is Vengeance. There is a button to light up a cig and toss it as a distraction. The stupid toasters shoot at it presumably because it has a heat signature or something.

Also Steam page is up.

Gears 5 takes the series into some new directions, and studio head Rod Fergusson and narrative lead Bonnie Jean Mah spoke to us about the decisions behind them.

Kinda shocked this game still doesn’t have it’s own actual forum thread aside from this. Anyway, the preview embargo dropped yesterday…

Previews seem to be very positive about the game, including at least two I read from people who said they were kinda unenthused about more Gears, but came away from this preview event much more excited.

Personally, I found Gears 4 perfectly competent and workmanlike, though it didn’t stick with me at all, and I didn’t even bother with the multiplayer. Gears 5, on the other hand, is interesting me far more as I read about it. The changes they’ve made to Horde mode make me want to play Horde again for the first time since Gears 3, and I’m a fan of the more striking visual palette this game seems to go for, versus the old browns and greys.

The game has had a baffling hype build-up though, starting at E3 2019, with that awful stage presentation that revealed next to nothing and featured no gameplay. And now it’s finally going full bore with less than a week before the game is available to Game Pass subs.

Thanks for the summary. I played a lot of Gears 2 Horde mode back in the day, it’s still my favorite coop experience ever. I finally played a Gears campaign earlier this year when I finished the original Gears campaign in Gears of War’s remake that’s on Game Pass.

I then started Gears 2 campaign, which I’d played on coop before with my brother one day. Gosh, we made it through so much in one play session, I had no idea. When I tried making it through that same area of the campaign in Hardcore single player, it was much, much tougher by myself, since Dom the AI single player is completely worthless and adds absolutely no value.

I do still plan on playing through Gears 2 and 3 and 4 campaigns, based on being surprised at how much I enjoyed Gears Ultimate’s campaign.

I’m a fan of the more striking visual palette this game seems to go for, versus the old browns and greys.

To be fair, it hasn’t been brown and grey since Gears 2.

I do still plan on playing through Gears 2 and 3 and 4 campaigns, based on being surprised at how much I enjoyed Gears Ultimate’s campaign.

I actually rented Judgement and played it briefly when it came out. I liked the idea of it. Basically the campaign is like playing Horde mode in single player. More and more waves of different types of enemies are thrown at the player. It was enjoyable, but I didn’t get the impression the campaign had much of a story that I would need to catch up on.