Any early takes on this? My PS4 DL is stalled behind Metro: Last Light Redux and Risen 3 (which are on sale for $4.99 apiece) so it make be late tonight before I get to play.:)

I think the catch all is over here:

Both Gwent and Thronebreaker has recevied updates. In case of Gwent, it’s the typical balance/bubfixing update, in case of Thronebreaker, apart from bugfixing they have increased the difficulty in Normal and Hard modes as I wanted. I think I’m going to replay Thronebreaker now, skipping dialog I already saw, and getting a pair of character I didn’t get before.

In hindsight, I think Peter_Olafson had the right idea, this is a new, separate game and deserved a new thread. I think Thonebreaker has been too ‘hidden’ in the Gwent thread, as a result not a lot of people have read about it.

I’m going to write a bit about the game here.

Imagine for a moment how easy would have done for Cd Projekt to make Thronebreaker as something of a cheap addon for Gwent: just make a linear story where you move your character around from place to place, and while the story is told you have some battles against monsters and enemies with the card game, as AI skirmishes in Gwent. Bam, done. Cash in.

But no, I think Cd Projekt went farther away than that in quality. A pity that this time, they don’t seem to have been rewarded. Maybe it was a miscalculation, and the mix of strategy game, puzzle game, and single player narrative was too eclectic for most people.
In any case, I had some issues with the game as it was released, but now they have patched most of the bugs, they have rebalanced the difficulty, so now I’m able to stand up in favor of Thronebreaker. Some of the reasons you should buy it: 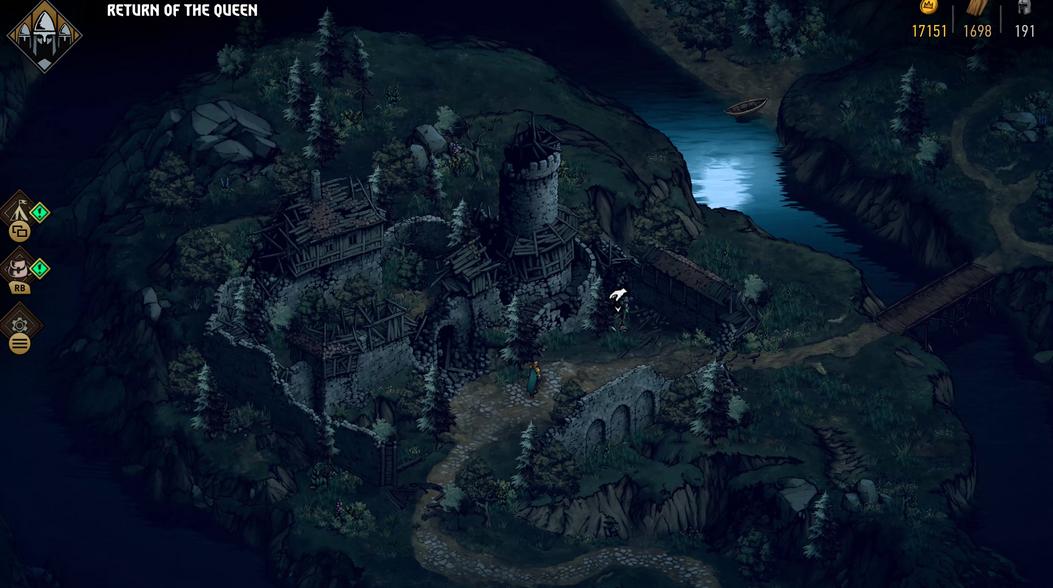 -Beautiful, detailed 2d graphics.
-Nice witcher-style music.
-Cheap for the amount of content. It’s a 37 hours of game, if you don’t skip the voice lines that goes together the text (and you shouldn’t, see below), read all the battle intros (writing in good), and play in a proper difficulty (read: mostly in Hard, game is a bit too easy otherwise).
-It’s one of the best voiced acted games of the year. This isn’t about a single actor, the entire game has a very good level. It really brings the game world and story alive, supplementing the lack of 3d characters properly animated.
-Sense of progression, as you find new heroes, find new equipment for your leader, recruit new units, and upgrade your camp unlocking new options.
-Very good writing. To surprise of no one, the writing is well above the average game, in both prose quality and in characterization, and story beats, with some interesting developments. There are some passages that are truly haunting and raw, not what you would expect in a card game I guess, but this is Cd Projekt telling a serious story of doom, war, vengeance and betrayal, and it goes to interesting places.
-Great choice & consequence. This is actually better than the Witcher games, that always had well done but… sparse c&c, usually just in key moments. Here there is a more constant stream of decisions, that affects characters, story and gameplay: it can affect which characters will join your party, which ones will leave you (like, literally all of them can leave you, some of them have more than one trigger for it), it can gain you some unique items, it can affect your resources (needed for upgrades) and battle morale, and obviously it affects the story itself, I read the ending has 20 variations.

Now, let’s talk gameplay.
-It has a good variety. Yes, it’s all ‘Gwent The Card game’, but inside that narrow type of gameplay, I’m surprised they could cram much more variety I thought it was possible: there are short one round battles, there are three round battles where some different cards and strategies can be more or less effective, there are story battles, boss battles or special battles where the rules are totally different (some of them are almost like a puzzle where you can choose the deck freely), and finally there are 43 unique puzzles, with a set goal and a set hand and deck, which are all unique and pretty original.
-Some examples of puzzles can be using stealth to steal a document while avoiding guards (yes, that’s represented with unique gwent mechanics), or burn all the corpses with plague you find in a place, or kill a regenerating monster with limited resources, or avoid the cattle to be killed by a monster.
-Even the normal battles, be one or three rounds, are more unique than you may think, it isn’t like playing a simple gwent skirmish match against an AI bot. There are dozens of different battles.
Most of them have indeed something different, some of them have a theme, like fighting against vampires and boiras than drain your life, or against arachas that can multiply without end if you aren’t careful, others have unique cards that appear only in that battle. Some have an unique mechanic like a wall that you can break on a siege, or an unit that tries to run away in the middle of the battle. Or a battle where the enemy starts with assassins with an unique ability. Most have an unique leader effect, like a leader that steals your own units, or another that can deal damage depending if your highest unit has even or odd power.
-And of course, there is a good number of different tactics and strategies that the game have thanks to the cards you have. There are some tricky combos that sometimes I surprise myself with the card interactions, which as this is a single player game, they went pretty far in what you can do, while in multiplayer games they are usually more conservative for balance reasons. 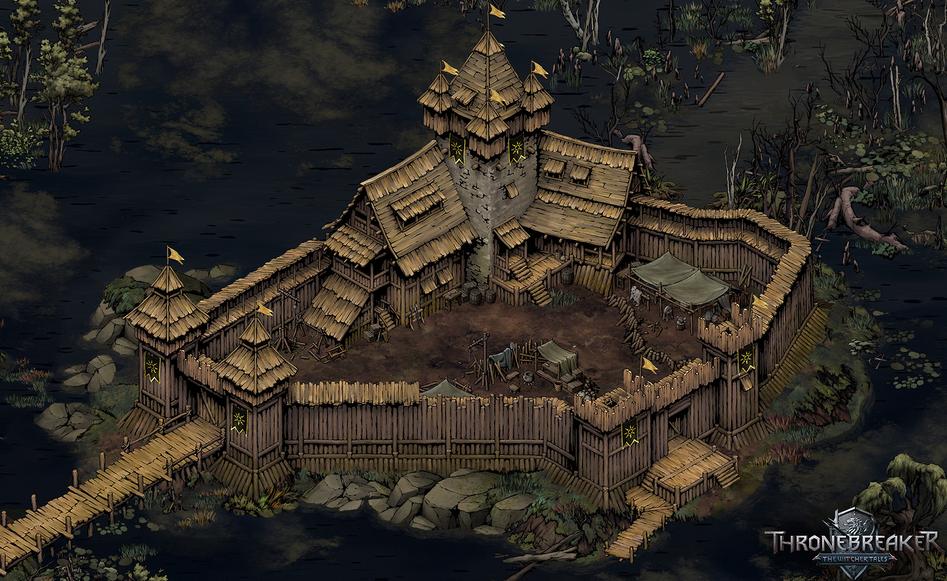 Not that everything is rosy and perfect, the game also has some flaws:

-The balance of the economy could be better. Basically resources stop mattering in the middle of the fourth map, of five.
-A bit related to that, but in general the last map feels a bit weaker, because it has a few more generic fights than you didn’t have in other maps, a pair of weird puzzles, and it has less new cards to obtain so at that point the gameplay feels more repetitive. It’s like they made the game too long, or they couldn’t do all all unique content they planned for the game so the last stretch suffered.
-I have a pair of problems with the story. The game makes a good job on selling on it, on the harsh situation Meve finds herself with her little army against the giant of Nilfgaard.Like, you don’t know how the hell you are going to win against them. But suddenly everything changes in between the 4th and 5th map where Nilfgaard start losing, but it’s done in a 8 second comment in a custscene, so it feels both too sudden and too unconnected with what you’ve been told until that point, and also it doesn’t feel connected with your actions, it can’t be said you beat the giant.
-The other problem I have is the characterization of the protagonist, Meve. Which is interesting in some regards, and different to other protagonists of video games. She is a strong woman, but… almost too strong! She can be boring because of that, she barely falters where it could have been interesting for her to falter, she is too infallible, and too straightforward. Even the core conflict between her and her son, that could be a heartbreaking tragedy, results into something strangely cold and subdued.
-The difficulty isn’t as well balanced as I would like. The game was too easy in the release version, which was fixed later by increasing the difficulty in later levels in the last update, but it was a general change done to all the fights of the game (say, +2power/+3armor in the third level to every enemy unit), instead of having every individual fight being re-balanced. As result, there are a few fights are now too hard for their zone because the general buff interacts with unit abilities in unique ways, and a few that are still somewhat easy.
-Finally, there is a bit of ludonarrative dissonance! There are some sections of the story that remark the terrible cost of the war for your small army, or how harsh is being the journey through a swamp, but in reality you have abundant gameplay resources, in gold, manpower, etc. There is no attrition mechanic in the game.

I only found out about this game yesterday when I read through the Epic Game Store thread.

I wasn’t that big on Gwent, but I will get this at some point. If nothing else I’ll just play it for more Witcher world stuff. With Projekt Red the story and choices are probably worth the time.

Did you god damn read what Turin wrote right above you?
It is much more than that. It is a full blown 2D RPG that happens to use some of gwent’s mechanics for combat, but even that is better than one would expect.

Yeah, a lot of the encounter battles have unique rules and the setups are like chess puzzles. Here’s your limited hand of cards, now stop the goblins in two turns. Stuff like that.

I did read it. That’s how I found out the combat is resolved through Gwent cards.

I’m pretty much with Rock8man on this one, I’m really interested in the Witcher universe but not at all in playing Gwent. Even gussied up and tricked out Gwent is still, you know, Gwent.

I just rode that same roller coaster. Another Witcher game? And it’s been out this whole month?! Why have I not…OH, it’s Gwent.

I guess it’ll save a hell of a lot of cash on the Netflix series when Geralt pulls out his cards instead of actually showing him take down some harpies.

I did read it. That’s how I found out the combat is resolved through Gwent cards.

Your post was extremely reductive though. “it’s just a Gwent card game.” is literally bullshit, it is much more than that.

Fair enough. Still a shame you are not even willing to give it a chance though, it really is fantastic. I am not a big gwent fan, but anyone who likes good writing is probably going to enjoy Thronebreaker.

I haven’t followed much at all, is their any voice work?

It has AAA production values, so flawlessly fully voiced with great witchery soundtrack, if that’s what you mean

I haven’t followed much at all, is their any voice work?

Only one way to know it. Like reading my post where I praise the voice work :P

I request a TLDR summary. :)

I request a TLDR summary. :)

It’s a well-produced (art, music, voices) 2d game in the Witcher world that mixes turn based strategy gameplay in the form of a card game, puzzle game, all with progression mechanics within a narrative-heavy framework with good writing and characters as Cd Prokekt is capable of, adding even more choice & consequence mechanics than in the Witcher games. It’s also longer and more varied than you may think at first, as it seems a ‘limited’ small game at first sight.

I’m totally excited about this game although it’s not yet in my budget range just yet.