Link - Requires a copy of Tie Fighter on CD (either the DOS or Windows version) and X-Wing Alliance.

Yes, the day we thought we would never see has arrived and the first part of the TIE Fighter Total Conversion has been released - go to the downloads page at once to enjoy!

If you experience any difficulties whilst running the TFTC please post on our forums and we will try to solve the problem for you. If there are any bugs in the TFTC we will not be able to fix them until we know about them.

Watch this space for news of the TFTC expansion pack.

Many thanks go out to all the people who have helped make the TFTC a reality.

Also of note is the unreleased Emperors Hammer, a TC from the Freespace 2 source code due sometime in the next two months - Link

Damn they don’t have any screenies on their webpage.

And is anyone else disappointed about there not being TCs for newer games? I wish they would make a Vega Strike Star Wars TC :(. It’s not even that hard to get quality models [of spaceships] from other TCs, the modders would just have to concentrate on making good gameplay/sounds.

Lemon have you tried this out?

Okay, I was able to try this out, and installation is a song and dance if ever there was one. First, both Tie fighter and X-Wing Alliance need to be installed before you even install this. You also need to lauch XW:A and create a pilot, then leave the game. Once they’re installed, you’ll need to insert both your Tie Fighter and X-Wing Alliance disks when asked so it can copy and covert voice and sound files.

The nice thing is that the installer told you exactly what you needed to do during the installation, like wait for the XW:A launcher to open, then close it, then press OK, for example. While it was a bit of a dance it was also painless.

Once installed, you need to launch the game through the included launcher, it tells you, or there could be issues. It also asks which pilot you want to use once you install it, so I suppose you could have multiple pilots.

For some reason the intro movie didn’t work for me, even after I installed the codecs it asked me to, so I suppose there might still be some issues. Once I got to the concourse, however, it was like old times. I was impressed right there and then.

Once I picked a battle (the first, Aftermath of Hoth), instead of the ususal missle selection screen or what not, I was pleasantly surprised to find myself in a new Imperial Hangar Bay (shown below): 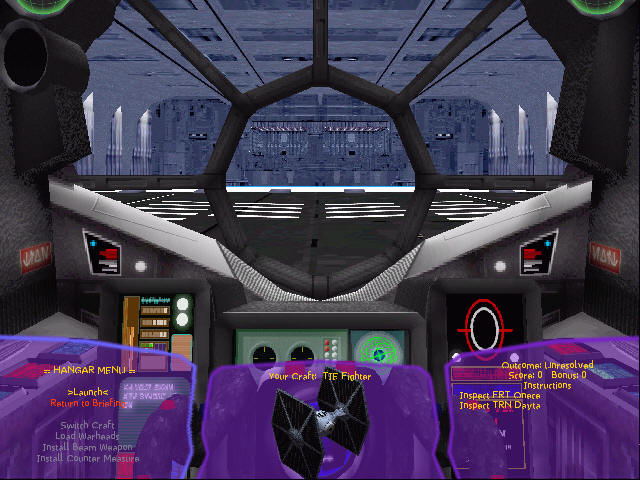 I thought I told the game to go 1280x1024 res, but it seemed to be still at 640x480. No matter, I was just happy to play. Once I launched into the game, it all sounded the same, but looked much better than the original. Here’s some screenshots I took from that first mission: 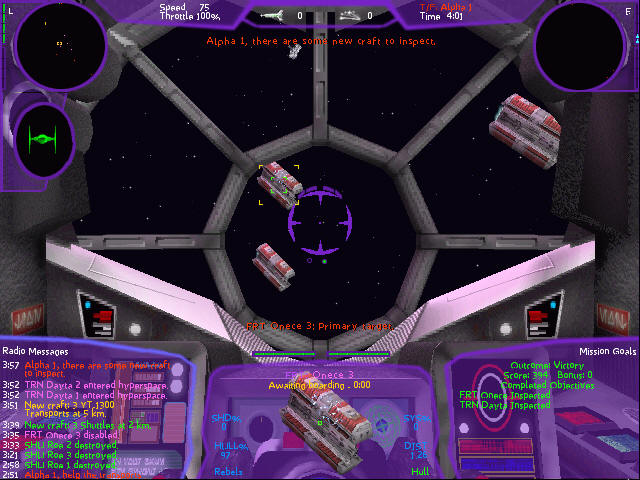 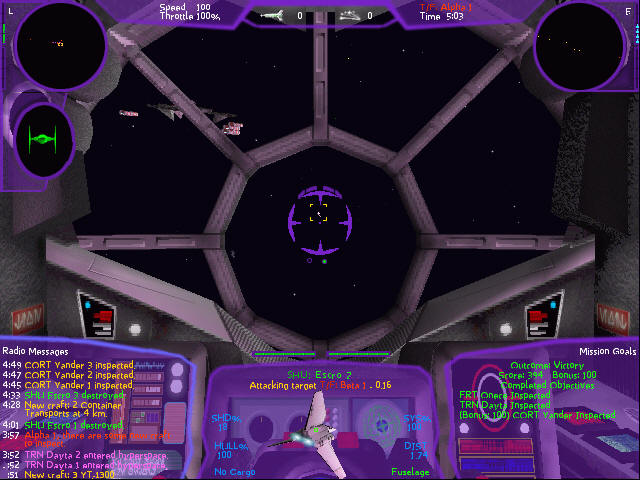 So far, despite some glitches, it looks good. I can’t wait to play more. :)

Let me know if you have any questions. I hope I was informative. :) Thanks!

What’s up with the mspaint HUD? Hell I’d make a decent HUD for him if the mod is good.

What’s up with the mspaint HUD? Hell I’d make a decent HUD for him in the mod is good.

It’s pretty much identical to the X-Wing Alliance HUD as far as I remember.

I never played Alliance… but after googling for some shots, you’re right. Good lord that is nasty.

It looks similar to the Tie95 edition only with uglier cockpits. (Ya, I said cockpits)

Shut it, Scry! Those cockpits bring back some very fond memories!

Man, that looks great. I reinstalled X-Wing Alliance a few months ago for an article I was doing on Star Wars games. That thing holds up, pink cockpits and all. If it weren’t the holiday glut right now, I’d be all over this TIE conversion…

I would just like to say that I made it all the way through X-Wing, except for actually blowing up the death star, with a Gravis Gamepad. For those who don’t remember, it was a Nintendo-like gamepad, and the thumbpad was strong and digital, in the sense that it only knew about 6 directions, no subleties of flight. God, to have that kind of time to waste again.

While I played through a lot of the early Wing Commanders with only a mouse. It took only a few missions of X-wing to be disgusted with the mouse controls to run out and buy a proper joystick.

I like the look of this :) sadly i’m still struggling on X-wing :oops: i just cant get past mission 8! and until i beat Xwing, i dont want to try Tie-Fighter(which is the better game i’ve been told).

Alliance was decent enough - but i think the older games might just beat it for that good star wars vibe?

I like the look of this :) sadly i’m still struggling on X-wing :oops: i just cant get past mission 8! and until i beat Xwing, i dont want to try Tie-Fighter(which is the better game i’ve been told).

Alliance was decent enough - but i think the older games might just beat it for that good star wars vibe?

I’ve been replaying the non-enhanced Tie Figher off and on for the last few weeks. It’s as good as I remembered, and it’s as demanding as I remembered. Flying around in an unshielded craft lets you know just how valuable the Empire thinks you are. There’s no reason not to fire both up and play each as you see fit. TF is also more forgiving if you get stuck, with multiple campaigns available early on.

With regard to X-Wing, are you stuck on that level with the mines? The trick is to shoot & run, and rotate the ship while you run away so the mines can’t get a fix on you.

When playing X-Wing, I cheated so badly. When there was a mission too hard for me I would copy over the mission file with an easy one.

Oh god that mine mission - the horrible memories are flooding back to me now :O No doubt about it, Xwing had some incredibly TOUGH missions. It’ll be interesting to see if I handle it better today versus back in '93 when I first played it.

X-Wing was a good game, but…

… if you are willfully refusing to play TIE Fighter on account of some nonsensical desire to finish X-Wing first, you are really doing yourself a huge disservice.

I was way too wimpy for X-Wing. Difficulty just seemed nutso, although I was in a busy patch in school when I tried to play it way back when. TIE Fighter, though, wow. That may be my all-time favorite game. I must’ve spent hundreds of hours with it back in 95. Remember paying some crazy price like $84.99 CDN for the special CD version, but never regretted it, even though I was still a starving student.

I just played a few more missions tonight, and MAN was it fun. I wasn’t in doubt at the content, but the trasfer and conversion held up surprisingly well. I played 5 missions straight tonight with no hiccups at all, and it looks GREAT at 1280x1024. I know where much of my free time will be over the next couple of weeks. ;)

Funny thing too, I was at my favorite PC game store tonight, and they had used copies of both the X-Wing and Tie Fighter Collector’s Edition CD-ROMS…the originals…I picked them up, of course. :)