With regard to X-Wing, are you stuck on that level with the mines? The trick is to shoot & run, and rotate the ship while you run away so the mines can’t get a fix on you.

Its that one where you’re in a Y-wing and you have to disable a shuttle carrying a kidnapped solstan leader as it makes a bee-line for a star destroyer. In the way are a few waves of enemy fighters that go faster and shoot harder than a y-wing :( Its not mission 8 - that was another one that took me about 15 attempts tocomplete! lol

For the nostalgia value i have an old thread+screenshots!(you’ll need to sign up to poly to view them!) on Xwing here at poly: http://apolyton.net/forums/showthread.php?s=&threadid=134407

(@Tom Chick - if this is bad form please let me know, i’ve done it before and might a few other times if a relevent thread comes up here for older classic games. Still i dont like to link off site…but as i spend most my ‘forum’ time at poly - i do most of my indepth threads there. Anyway tell me if its bad and i’ll stop :) ).

It also ends with details on that particular mission i’m(still!) stuck on.

X-Wing was a good game, but…

… if you are willfully refusing to play TIE Fighter on account of some nonsensical desire to finish X-Wing first, you are really doing yourself a huge disservice.

Well i grew up with star wars - it had an impact on my life to the extent i’d rather play and complete the game as the ‘good’ guys first, and as its the first game i feel i should play in seqence - like watching the origonal movies in the correct order. Ok sorry its very geeky ;) …i might bend the rules, especialy if i cant get past this darn missionX!

Anyone else try this Alliance mod? i might have to look around for an old copy of Alliance if its good :)

I just got it up and running and it’s nice revisiting Tie Fighter but I don’t know if the desire to replay the whole thing is there. Looks like there’s some 3rd party graphical updates you can download from here.

Oh by the way you can change the HUD color to something else other than that vomit pink color.

Its that one where you’re in a Y-wing and you have to disable a shuttle carrying a kidnapped solstan leader as it makes a bee-line for a star destroyer. In the way are a few waves of enemy fighters that go faster and shoot harder than a y-wing :(

Well i grew up with star wars - it had an impact on my life to the extent i’d rather play and complete the game as the ‘good’ guys first, and as its the first game i feel i should play in seqence - like watching the origonal movies in the correct order. Ok sorry its very geeky ;) …i might bend the rules, especialy if i cant get past this darn missionX!

If you push all your power into the engines, even a Y-wing can move fast. Dump your laser energy into your shields (they fade much slower) and haul ass to the target. Dogfight only after you’ve disabled the shuttle.

Bend the rules, you’ll find the Empire has very good reasons for its actions. There is no downside to going out of order here. No other games have given me that seat-of-the-pants feeling of tension like X-Wing and Tie Fighter.

This thread makes me very annoyed that my parents don’t have a PC in the house (Mac family). I’ll have to set this up when I get home. All this talk of mission strategy has made me all nostalgic. The shield/lasers/engines energy balance thing was such a great gameplay element. I wish LucasArts would get on the ball and make a modern version of these games for PC or the 360 or something.

If you push all your power into the engines, even a Y-wing can move fast. Dump your laser energy into your shields (they fade much slower) and haul ass to the target. Dogfight only after you’ve disabled the shuttle.

Yeah, dump all gun energy into the shields, and then allocate all power to engines. When you get close (<1 k), stabilize gun power and transfer shield energy into guns while you wait for a torpedo lock. (Er, it’s been awhile, but I seem to remember that shuttles can survive a single torpedo hit.)

Assuming you know which shuttle to target from previous attempts, you can throw a torpedo at the shuttle to bring down its shields so that you can disable it on the first gun pass.

It’s sometimes worthwhile damaging (but not destroying) interceptors, since they will waste time returning to base (which delays the reinforcements).

I finally got everything I need for this and I hope that I get a chance to play it this weekend. I love all these games even Xwing-A.

I have a worry in that mission - i remember part of your brief is to not only disable the shuttle with the solstan leader, but you have to defend it while waiting for an escort to arrive and see it safely away. Thats what was giving me the trouble - i think i had once or twice(out of about 20 atempts!) survived to disable the correct shuttle, only to be completely outgunned by the waves of ties that come to destroy the shutle before the escort turns up! Its a tuff one for sure - but i’ll give it another bash with these new strats :) If not i can try the cheat method(turn the difficulty down).

The real classic games remain excellent, even in today’s hi-res, movie like games market imho - it can just be tricky getting the old games to run on new hardware(so i keep a p166 for such games).

I like X-Wing Alliance a lot. The variety of missions were fun, and the hyperspace during missions added a lot of variety to the missions.

Like all X-Wing games though, I never blew up the Death Star.

The absolute key to X-wing is Alan’s last suggestion: injure the fighters so they retreat then let them.

I had the strategy guide for X-wing and let me say that was one kickass book. Had a really cool storyline that went along with the missions. Was like a novel. Really cool CGI illustrations as well.

I think Tie Fighter did the same but I never had it.

To my shame I played X-Wing only once and Tie fighter never. I plan on rectifying that when I get back into the city :)

I think Tie Fighter did the same but I never had it.

I think it must have. On the feature list (for this mod) they mention using the strategy guide to create story content as in XWA where you had family members emailing you.

Wow, this mod is finally out!

Uh, huh, well now, would you look at this? And right before a long US Holiday weekend…

Wait, so this is a separate deal from the TC in the original post then?

Not sure, but this thread still works for it.

I just bought XWA for this, as it’s only a few bucks on Steam. As far as I’ve read, you do not need the original TIE Fighter installed, although they recommend it purely because it’s the right thing to do. I have the original version of TIE Fighter on all it’s floppy disk glory, but obviously no way of installing it (I can stare at it lovingly though, which achieves a similar thing).

Obviously I will be attempting to get this running in VR! I never actually played TIE Fighter very much when it was released. I reached some particularly difficult mission fairly early on and didn’t power through it. Also, I never played X-Wing Alliance either, so I have the TC of that to look forward to. All I need now is infinite time.

I never actually played TIE Fighter very much when it was released.

Same. I never played any of it on release, I did try it a decade or two later, but it seemed very much from the medical frigate design philosophy of Xwing (the mission that I could never get past in that game).

I never played X-Wing Alliance either

I really enjoyed X-Wing Alliance. It came out during a space sim resurgence. Wing Commander Prophecy, Descent: Freespace, I-War, and then XWA. I didn’t like it quite as much as those other games, but I thought it was close.

It’s funny that during this era, studios were trying to kind of keep budgets low while also telling big stories. X-wing Alliance did this by mostly telling the story of you and your family through emails. I know Brian and others make fun of it for that, but I really thought it was a clever idea that worked well for me. It gave it more of a personal feel and more personality than Descent Freespace, for instance, which told its story only through briefings and in-mission dialog. 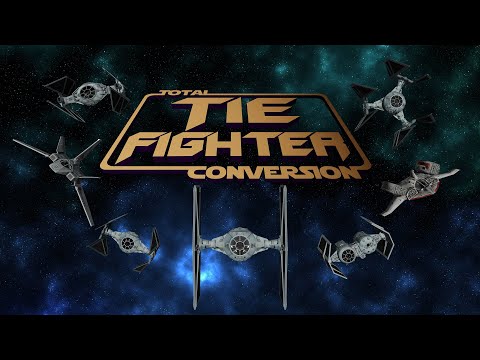 I installed XWA TC last night, but couldn’t find a way to stop my craft spinning. Using a 360-clone gamepad. I’m sure it’s all down to the joystick configuration. But anyway it looked pretty good while spinning! (this was just XWA, I haven’t installed the TFTC yet)

TIE Fighter is about 25 years old, and X-Wing Alliance is… 20 years old? I guess it was the last space flight sim that was highly moddable, because that’s what we were doing 20 years ago? And it must also be a really flexible framework if it can look relatively up-to-date! I’m surprised and impressed. @krayzkrok, I wonder if that age means it’s still built for a joystick. Or are they touting updated controller support?

The OG T/F didn’t even have textures on ships, it was all just goraud shaded polygons, so yeah-- looks a lot better.