Torchlight 3 - We Used To Be Friends, A Long Time Ago 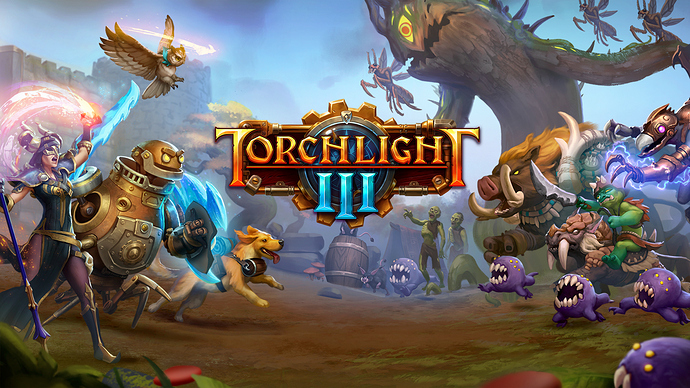 I guess Torchlight Frontiers is turning into Torchlight III and will follow a classic “act” structure. Horizontal progress has been removed, the Frontier specific stuff, and it’s going to (from what I gather) play like a traditional Torchlight game - only new, and such. I think I’m more interested in this now than when it was a co-op (primarily) experience, honestly.

Zones are private by default, for example. Players can still play with friends, but it looks like a single player experience as well (by default, even). I am on board.

I honestly don’t know anything about Frontiers, and I genuinely hope Torchlight 3 game turns out to be more than a collection of salvaged content from a scrapped game, but I thoroughly enjoyed Torchlight 2 and would love a third entry in the series.

I hope it handles multiplayer better this time around. Torchlight 2 was a disaster of NAT errors for every player every single time I ever tried to play anybody at all, ever. But as a single player game it was mucho replayable for me.

This is tentatively a day one purchase for me.

Well now I gotta remember what Torchlight Frontiers was going to be.

The strange thing is I just saw Torchlight Frontiers last night along the bottom of my “suggested threads” and I clicked it and found I hadn’t been to the thread since mid-2019, so I missed that it was delayed. I guess I just forgot about it entirely and was wondering what happened when this popped up. Crazy timing.

Here is our previous thread.

Looks like this was just announced, and according to an IGN article has more Diablo developers on the team than original Torchlight developers! Good thing or bad thing? Maybe neutral thing? In any case, I liked Torchlight and its follow up, though I wasn’t crazy over them like I was Diablo III, and so I’m always up for more of a good thing. More info here: From what I can gather, it’s some sort of persistent online world where you and your friends can PvE all day long, which could be int…

I was going to update it, but then the title would be wrong, so new thread time.

For one box-price, you will own the game and be able to play the way that you want, online or off.

Yeah, I believe overall this is now something I can put on my “looking forward to in 2020” list. It’s checking a lot of boxes for me that Frontier was not (or was even aggressively unchecking).

I think I’m more interested in this now than when it was a co-op (primarily) experience, honestly.

Same here. Offline play is enabled now, too, which is an unexpected but welcome development.

Also, your thread title has that song stuck in my head now ;)

I signed up for TL:Frontiers Beta but never got in, one of my buds played it too. I wondered what happened to it when i saw the thread pop up and now i have my answer.

TL3 isnt from the original devs is it, but i’ll most likely give it a go. I still play TL2+mods on occasion.

I wasn’t particularly interested in Frontiers, but a standard ARPG hack n’ slash separated by acts, now that I’m into.

I think this is a good change. I loved TL1 and 2 and thought Frontiers might repeat the mistakes of Diablo 3 in not understanding itself, at least at launch.

I don’t know, positive change or not, this is a game from a Chinese company that has only put out MMORPGs. There is no connection to the old Runic devs. I’ll being waiting for reviews.

Never mind, this is a lie.

I don’t know, positive change or not, this is a game from a Chinese company that has only put out MMORPGs. There is no connection to the old Runic devs.

I did not know this. And if I did know this, I had forgotten. I was mostly interested because I like what Runic did with TL2.

This game is being made by an American company called Echtra. The company was started by devs from blizzard that worked on diablo and diablo 2. Also, Max Schaefer was one of the original founders of Runic Games and the CEO of Echtra.

So you’re saying I shouldn’t trust what I read on reddit?

Torchlight 2 had so many online/network issues. I loved playing it with friends though until it just stopped being in sync all the time. If they release a good option and that’s gone, good very well be on the list.

LOL, I think they are funded by Perfect World? I think that’s a newer development.

Torchlight 2 still has a bug where it will crash upon exit unless Shadowplay is disabled entirely.

I see they moved from ARC (Which is Perfect Worlds own launcher) to Steam as well. I wonder what happened here?

Maybe they bought out the Perfect World money and influence?

For one box-price, you will own the game and be able to play the way that you want, online or off.

Same. Glad they pulled away from the micro transaction formula.